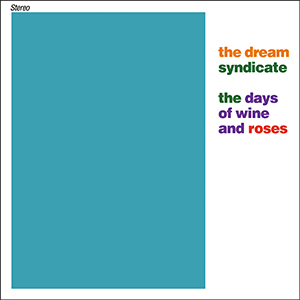 “We do not know how and/or why genius is possible, only that–to our massive enrichment–it has existed, and perhaps (waningly) continues to appear,” Harold Bloom writes in the opening salvo of his book Genius: A Mosaic Of One Hundred Exemplary Creative Minds.

Bloom includes everyone from Joyce to Keats to Dickinson in his tome and although all of his selections have different aesthetics, the one thing they have in common is that they, in the words of Bloom himself, “stand both of and above an age.”

If I were to fashion a similar book, but confine my choices to musicians only, I’d include chapters devoted to the works of Dylan, Marley, The Beatles, Simon, Cohen, Joplin, Hendrix, Waits, MacGowan, Strummer and Winehouse because, quite simply, their work stands both and above an age.

I’d also include a long chapter on The Dream Syndicate for the very same reason.

I could go on about the L.A. band’s discography, which began in the early ’80s and ended with 1988’s Ghost Stories, but for the purpose of this piece I’m going to confine it to their masterful 1982 offering The Days Of Wine And Roses.

The Days Of Wine And Roses is a perfect sonic document that not only has stood the test of time, time still seems to be trying to catch up to it. In other words, it’s an album that doesn’t anchor itself to an era and instead has carved its own place in music history by being so unique, innovative and bold. From the grinding beauty of “When You Smile” to the dark jangle of “Tell Me When It’s Over,” The Days Of Wine and Roses is, quite simply, stunning work. For a young band to emerge with a sound so realized, is a testament to the band’s unique and creative powers.

To put it in baseball terms, the album has more highlights than a Ted Williams career retrospective.  There’s the howling post-punk stomp of “Definitely Clean” the feral abandon of “Then She Remembers,” the surging six-minute epic “Halloween,” and “That’s What You Always Say,” which is a raw and rueful winner.

Reissued by Omnivore Recordings, who have set a new curatorial standard for reissuing albums, The Days Of Wine And Roses ’15 comes with a series of essays/liner notes by members of The Long Ryders, Green On Red, Sonic Youth and Divine Weeks.  It also includes a series of heretofore unheard tracks “Like Mary” and “Outside The Dream Syndicate.”

Stereo Embers had a chance to sit down with The Dream Syndicate’s Steve Wynn to talk about the impact of The Days Of Wine And Roses as well as its enduring power.  Even though the band’s lineup has changed a bit, Wynn declares The Dream Syndicate fitter than ever. “Just wait for our next album,” he says. “You’ll see!”

Stereo Embers: Did you feel at the time of the recording of the album that the band was in the pocket? That you had hit a real fluid stride?

Steve Wynn: We didn’t really have time to think about much of anything. We only had one midnight-to-8am chunk of time to get them all on tape. So we played them without hesitation, without much thought, just going all-out like we would at one of our shows. I don’t remember putting any pressure on ourselves–the lack of time and the late hour and our inherent cockiness kept all of that at bay. But I know that we didn’t try to be careful or hold back in any way. And when we heard everything back the next day we knew we had captured what we loved about our band.

SE: What do the extra songs that are included in the reissue reveal about the band’s creative output at that time?

SW: We weren’t the kind of band that constantly came up with new songs. The 9 songs on Wine and Roses and the 2 others from the first EP are pretty much all of the originals we had in that first year. After the album came out I started writing again. A few riffs, a few songs, a few bits and pieces. And I felt like our band was already changing into something else–those bonus tracks connect the dots and show how we got from album 1 to album 2, I think.

SE: Why do you think the Days of Wine and Roses is so resonant? Not only has it stood the test of time, it seems to be thought of by many as the band’s signature work. I’m also wondering when you became aware that it had entered into public consciousness as such an important, enduring album.

SW: We immediately knew how much that album meant to people. All of us had been in other bands before that played clubs for 8 people at the bottom of a bill on a Tuesday night. But with the Dream Syndicate it was all so quick and remarkably easy. Dennis and I used to joke–and revel in the fact–that we knew around that time that we could pick up any music magazine on the newsstand and find something about the band. I mean, it didn’t make the charts but it connected with “our kinds of people”–hard core music fans, historians, critics, obsessive music lovers. But I actually think Medicine Show is just as much a signature work of the band, in a very different way of course.

SE: What was the reception to the record when it came out?

SW: 100% positive. 100% overwhelmingly positive. I don’t remember a single negative review although there were a few hardcore fans who said they liked the first EP a little more and felt that the album may have been a little too polished? Can you believe that? It’s hard to imagine anyone saying that now. But, yeah, everyone seemed to love it. I know that we did.

SE: You recorded the album post-college for Ruby Records–was the plan after Davis to just focus on the band or were you working as well? And what was your personal strategy about your own future? Was there ever a moment when you had to explain to your parents that you had chosen rock and roll as a vocation?

SW: There was actually 18 months between the time I left Davis and the start of the Dream Syndicate. And that time felt like an eternity. I tried out for various bands, did some rehearsals and even a couple of gigs with a few of them. But none of them fully excited me or felt like the kind of music I wanted to hear. I was really on the verge of not trying anymore. I was going to UCLA, studying English Literature–God only knows with what end in mind–and working at the Rhino Record store while occasionally DJ-ing in a Hollywood bar called the Cathay De Grande. In other words, a whole lot of things leading nowhere in particular. But I was 21 so it was all just part of feeling out the scenery. But once the Dream Syndicate happened and I saw the reaction to the band and our first record, I knew I had to give it a shot, especially since it looked more and more like we would be going out on the road. I quit college and my job. Both of my parents accepted my decision although my Dad said “I can’t tell you what to do–you’re an adult now–but you’re throwing your life away.” Very soon after he became very supportive, understood why I did what I did but would still always say, “You should do more ballads!”

SE: What was going on in 1982 that informed the sonic choices you made for the album? Influences aside, what was the band bringing to the table that had nothing to do with its forebears?

SW: Guitars had fallen out of fashion. There were a handful of bands that harkened back to the sixties or the Velvets or garage rock but only a handful. It was felt that synth-pop and dance music was all that mattered–both in the mainstream AND in the underground. So I managed to find the few things out there that felt like music I liked–The Fall, the Fleshtones, the Feelies, Orange Juice, the Gun Club and keyed in on how great they were. Our first album was a mix of our influences and the things we loved and the things we weren’t hearing. But I think the way we put them together and–this is a key ingredient–our lack of inhibition, our irreverence, the things we brought in from punk rock was what made it all more than just a studied exercise.

SE: Did you feel the lineup of the band was shaky or did you think the Wine and Roses roster would be around for the long haul?

SW: I don’t know. I was kind of shocked when Kendra backed out. Up until that point we were all very tight and best friends. Once Kendra was gone, Karl and I started drifting apart. I mean, I was never thinking I’d be doing it forever or that I’d be 55 and still making music full time. I would have LOVED that thought but I didn’t think it would happen. I guess the four of us had enough of a similar mission and once the cracks began to happen the mission changed. We were still a really good band and did some amazing things but it was never the same. Funny thing–these days the band feels more like it did back then. Just wait for our next album! You’ll see.

SE: It’s not fair to make you pick a favorite song on this album, so let me just ask this–what about the album makes you the proudest?

SW: You’re right. I like them all. But I do love, among other things, that the album doesn’t sound dated at all. It really does hold up nicely.