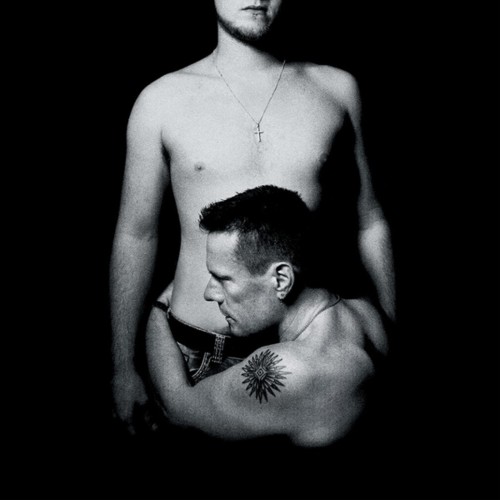 [The] purpose was to train scholars in the ideals of classical art, to instill in them a true talent for drawing, its applied skills, and to promote the idea of a natural school of historical painting.

The Academy accepted Blake in 1779, when the President was the painter, Sir Joshua Reynolds. He was also Blake’s teacher and promulgated the theory that the creation of “ideal beauty” and “intellectual dignity” was crucial to painting. Moreover, he was an ardent follower of Aristotle and the classical Greek tradition, upholding a belief that art should reflect universal experience and not the lives of particular individuals. 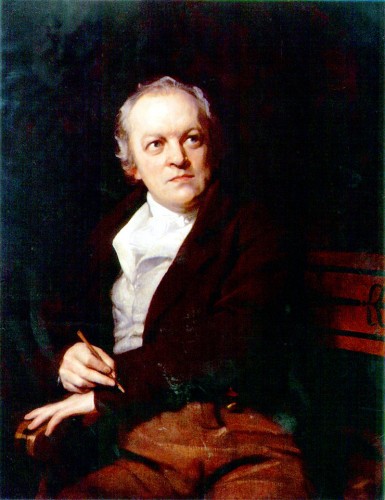 Needless to say, Blake didn’t like the teachings of his neoclassical mentor one bit. In fact, when Blake read in the textbook that Reynolds authored, “the disposition to abstractions, to generalizing and classification, is the great glory of the human mind,” he wrote in the margins, “To generalize is to be an idiot. To particularize is the Alone Distinction of Merit.”

Blake’s use of capital letters in writing “Alone Distinction of Merit” is crucial because it emphasizes a seed for what grew into the Romantic Movement in the 19th century. Indeed, in rejecting Reynolds and neoclassical ideals, Blake eventually created poetry, paintings, and engravings that celebrated the individual imagination, rebellion against authority, and raw emotion.

Blake wasn’t interested in copying the work of the old masters. He went so far as to create illuminated manuscripts – books that combined poetry, drawing, and engraving. Among these was Blake’s epic poem Milton, in which he presented his own version of John Milton’s Paradise Lost. But he first critiqued Milton in his satiric The Marriage of Heaven and Hell, “The reason Milton wrote in fetters when he wrote of Angels & God, and at liberty when he wrote of Devils & Hell, is because he was a true poet, and of the Devil’s party.” This was a definite challenge to the poet who wanted to “justify the ways of God to men.” 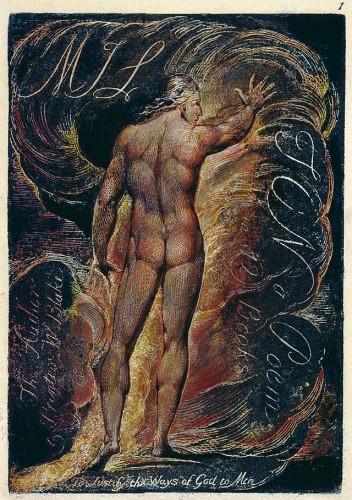 But Blake wrote Milton between 1804 and 1810. Before he got there, he composed two of his first illuminated manuscripts – Songs of Innocence and Songs of Experience, which appeared in 1789 and 1794 respectively.

The poems in these collections are essential for two interrelated reasons. First, they do something completely new in poetry by celebrating childhood as a state of prolonged innocence (rather than that of original sin) – but one that is not immune to the corrupting influence of organized religion, politics, class, and industrialization. Second, Blake chooses simple poetic forms – for example, that of the ballad – that formally mirror the innocence of childhood. In fact, his engravings for the poems make Songs of Innocence and Songs of Experience read somewhat like children’s books. 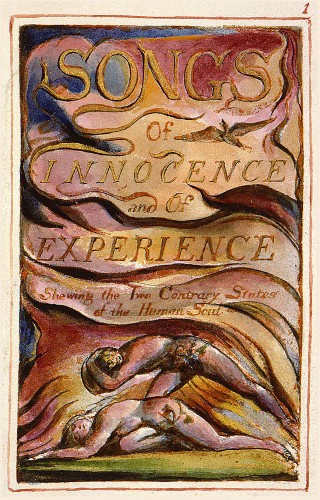 In the same interview, Bono said that U2 will release their Songs of Experience later this year or in early 2016, but what’s important now is for us to understand the ways in which Blake’s theories and poetry impact the compositions on U2’s most recent and much maligned album, Songs of Innocence.

My goal in writing this article is to discuss the album in a productive and positive way that examines it as a work of art and not in terms of Apple’s role in its digital distribution or any feelings we might have about U2’s perceived arrogance, bombast, and pomposity. Quite simply, we owe this to the band that gave us War, The Unforgettable Fire, The Joshua Tree, and Achtung Baby.

Let’s begin by looking at some of the titles of the songs on Songs of Innocence, which reveal a lot about how U2 explore childhood. Songs like “The Miracle (of Joey Ramone)” and “This Is Where You Can Reach Me Now (for Joe Strummer)” pay direct homage to musicians who inspired the band to play music in the first place. And others celebrate childhood friendship (“Cedarwood Road (for Guggi)”). These song titles show an earnest attempt to invite the listener into U2’s world of 1976, when they were innocent children (in Blake’s sense) starting a rock and roll band. Indeed, Larry Mullen Jr. was only 15 at the time, as was the Edge; and Bono and Adam Clayton were only 16.

In its lyrics and song structures, Songs of Innocence amalgamates form and content in way that would have been very familiar to Blake. Take, for example, songs like “Song for Someone” and “Every Breaking Wave,” the lyrics of which, at least in part, address the beginning of Bono’s relationship with his wife, Ali. The rhyme schemes, diction, and imagery are naïve, direct, and childlike (Bono knowingly dispenses with the complexities of the lyrics and line structures on The Unforgettable Fire and Achtung Baby, for example), granting these songs a Blakean feel. The bridge on “Song for Someone” goes as follows:

If there is a light you can’t always see

And there is a world we can’t always be

If there is a dark that we shouldn’t doubt

And there is a light, don’t let it go out

Bono’s words evoke a time of innocence, when young people deal with first love by seeing it in almost holy and definitely black-and-white terms. The light-dark binary suggests holiness but also the thought patterns of a teenage boy. In effect, the lyrics feel like Bono attempts to re-create an entry in his high school yearbook (or, perhaps, his attempt to write his first lyrics).

Another example of how U2 uses Blake as “a device to be able to write about the past” is “Every Breaking Wave.” Song structure is key here. U2 creates a simple verse-chorus-verse-chorus-middle eight-chorus structure that melds with the lyrics to forge another song of innocence. Bono laments the loss of innocence in verses that feature lines like “Summer I was fearless / Now I speak into an answer phone” and “Like every broken wave on the shore / This was as far as I could reach.” But the chorus suggests that his love for Ali can simplify the complexities that the loss of innocence entails: “Are we ready to be swept off our feet / And stop chasing / Every breaking wave.” In other words, the innocence of the chorus redeems the despondency of the verses. Just like in Blake’s Songs of Innocence, innocence saves the day on U2’s album.

Even the dark songs on the album – in particular, “Raised by Wolves” and “The Troubles” – find redemption in the Romantic and perhaps naïve realization that the particular actions of the individual, through perception, transcend the actions of authority. In “Raised by Wolves,” Bono sings about the fear that he experienced as an adolescent growing up in a violent and abusive household that consisted only of men (his mother died of a cerebral aneurysm when he was just 14), a situation that caused him to question the very notion of belief in anything: “I don’t believe anymore,” he sings, as well as “My body’s now a toilet wall.” But, in his innocence, he experiences compassion for his father and his behavior: “Boy sees his father crushed under the weight / Of a cross in a passion where the passion is hate.” By the song’s conclusion, he’s learned the importance of Blakean individuality: “If I open my eyes, / You disappear.” The fear vanishes when Bono wakes up to the reality of innocence…the reality of an existence not based on fear.

Referring to the Catholic-Protestant conflict that plagued Northern Ireland and U2’s youth and young manhood, “The Troubles” (which features Lykke Li on vocals, in addition to Bono) blends the personal and the political, just as Blake does in “The Chimney Sweep” and other poems. U2 structures the song by opening with the refrain,

Somebody stepped inside your soul

Somebody stepped inside your soul

Little by little they robbed and stole

Till someone else was in control

This refrain recurs seven times in the song, referring both to the violent tendencies that burdened all of Ireland from the late 1960s until the Belfast “Good Friday” agreement of 1998. Again making an individual decision to disassociate himself with this violence – “I can live with my denial / But you’re not my troubles anymore” – Bono reinforces the Blakean notion of innocence that runs through the album: “God now you can see me / I’m not afraid / My body’s sacred and I’m not ashamed.” In this Edenic imagery – very familiar to Blake – Bono clearly states that the naked and innocent human body has greater value than politics and violence.

Finally, when examining the Blakean import of U2’s Songs of Innocence, it’s crucial to look at the album cover. A kneeling Mullen clutches the waist of his son. Perhaps this is the best evidence that U2 is trying on the album to capture the Blakean ideal of innocence. It’s no coincidence that Mullen and son both have their shirts off; Edenic imagery occupies the cover just as it does songs like “The Troubles.”

Having said all this, I’m not arguing that Songs of Innocence is U2’s best album. Only time will tell where it ranks. But perhaps ranking isn’t important. When we were children we just played (in the Blakean sense); we didn’t rank or criticize. I’m simply suggesting that despite what people think of Bono and U2, they’re still playing and still trying out new ideas. And this is all that matters.