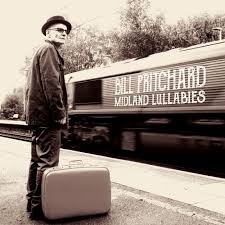 Wanna make a stripped-down singer-songwriter record that, for the most part, is naught but your voice and the deft sprinklings of a simpatico piano player? Well then, you best have something abidingly worthwhile – which is to say memorable – to say, a phrase-turning way of saying it, and a pitch-perfect voice that, even if it’s not, say, in Billy Mackenzie or Tim Buckley territory, nonetheless commands the audio spotlight with a riveting nonchalance. With the exception of strings highlighting them here and there, nine of the thirteen tracks on this steady, resplendent album from Bill Pritchard – a British cult-songwriter’s cult-songwriter with a large following in France – follow that recipe with what feels a disciplined effortlessness.

Enduringly likable from the off, Midland Lullabies, out March 8th on Tapete, also doesn’t hesitate to explore the deeper strata of a life lived without blinders in ways that call to mind the work of John Howard. With wit that treads a trail edged by a delicately caustic empathy, tracks like opener “Iolanda,” an intimate honoring of the unforgettable forgettables in a barely caring world, “Lullaby” with its strings sweeping through the deserted, dead-of-night streets of Paris like a breeze made of memory and yearning, or the pensive, image-rich “Garibaldi” where the personal and political get sifted behind a kind of veil of heroic uncertainty, portray with a glancing clarity the mix of frailty and grit by which every one of us finds – or fails to find – a way to navigate through the buzzing thicket of noise and distraction.

In other words, yes, there is an everyman’s touch to these songs, an impression more predictably imparted, perhaps, on those nine songs where it’s just Pritchard buoyed and abetted by the piano accompaniment of producer and well-established creative conspirator Tim Bradshaw. It’s little surprise in such a setting, with the voice of the singer, somehow both exquisite and plaintively workmanlike, nestled against the comfortable, expert textures of that piano (and given the richness of the narratives at hand), that a warm universality would obtain. Fact is, though, that even with the palette expanded to a full band work-up – the punchy poignancy of “The Last Temptation of Brussels” that finds the tumble of a Robyn Hitchcock hitching a ride aside the basher insouciance of a Nick Lowe, “Forever,” short, mellifluous, full of a time-lost longing – there’s no shortage of those same tender mercies, however wryly parsed.

Straightforward with a twist, engaging almost down to a molecular level, on Midland Lullabies Pritchard has far surpassed his stated wisecrack goal going into its recording – something about being known as a “shabby suited crooner” – and has instead emerged as a rightful heir to the dented crown and lasting accolades bestowed upon Ray Davies and Elvis Costello circa Blood & Chocolate. A career record, but then they kind of always are with this guy.