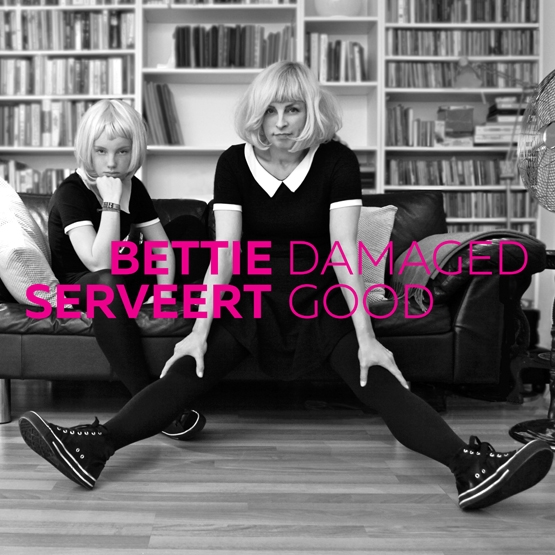 Record Store Day in the United States is on April 22nd, and to celebrate the day the Dutch band Bettie Serveert will be releasing a limited edition of their latest album Damaged Good.For the last 25 years, indie legends Bettie Serveert have been steadily moving forward, touring around the world and releasing albums year after year. Since the release of their debut album Palomine, fans around the world have been drawn to their lively music and spirited beats.

Recently, Carol van Dyk and Peter Visser answered some questions about Damaged Good, their plans for 2017, and offered some advice to those starting out in the music industry.

Stereo Embers Magazine: Hi! Thank you for taking some time to answer a few questions for me. First, as a Canadian myself I was excited to learn that the band has a tie to Canada. Carol van Dyk, I understand that you were born in Vancouver and then moved to the Netherlands, is that right?

Carol: Hi Samantha, nice to meet another Canadian and thanks for the interview request! Yes, I’m from Vancouver, BC. When my parents got divorced, I was brought to the Netherlands at age 7 to live with my grandparents. It was supposed to be a ’temporary’ thing, but I ended up staying here and had to learn to speak Dutch. I almost moved back to Vancouver, but then Bettie Serveert sort of ‘exploded’ and I’ve been living in Amsterdam for 30 years now!

SEM: So let’s talk about your latest album Damaged Good. It’s your 11th studio album, which is quite the milestone, what were some of the inspirations behind album?

Carol: Thank you! Technically speaking it’s our 10th studio album + 1 live Velvet Underground cover cd. Every album we make is a new chapter/adventure for us and everything that happens to us in our daily life has its impact on our songs. We don’t really sit down and say ‘Let’s write this or that kind of song’. Sometimes a song will write itself and all we have to do is to listen and let it happen. For instance, ’B-Cuz’ and ‘Love Sick’ wrote themselves. Peter and I started writing the song ‘Damaged Good’ in a dressing room of a club in January 2013, while we were on tour in the Netherlands.

‘Brother (in Loins)’ was inspired by a book I read online, written by an anonymous writer. There are so many talented (mostly young) writers that post their books/stories on the internet!‘Mrs. K’ was a song that I started writing in 2012, but at the time I couldn’t finish it.

Some people have mentioned that ‘Whatever Happens’ sounds like a song that could’ve been on our first album Palomine and I suppose they’re right.

Regarding ’Digital Sin (Nr 7)’, Peter and our drummer Joppe Molenaar had been jamming for weeks in our practice room, working on an idea which I totally didn’t get. I just sat there and listened to them playing, so at one point I asked them ‘What’s the beginning, what’s the middle part?’ So the three of us started working on a structure, Peter & Joppe mainly wrote the first half and I added the last half. But it’s mostly their ‘baby’ to be honest. The fact that it has the sub-title ‘Nr 7’ is because it was the 7th song we wrote for this album and at the time we couldn’t come up with a better title.

‘Mouth of Age’ wrote itself, after some people close to us suddenly passed away. It’s like a ‘reminder’, to tell people you care about that you love them, because you never know when you might lose them. I wrote it for Peter Visser who has been my best friend for more than 30 years!

‘Never Be Over’ was written in March ’14 and to my surprise the rest of the band instantly fell in love with it. After several attempts to record the song, we decided to get help from some friends, b/c no matter what I tried, I just could’n sing it the way I wanted to. I’m not a technically skilled singer. At the time Peter Visser and I were doing a ‘The Cure-tribute tour’ in the Netherlands with Prof. Nomad (aka Bartel Bartels), so I suggested to Bartel that I could re-write it and we’d find a better singer to do the song. Long story short: it took one hour to come up with a different version (I still have that recording on my phone), we recorded the song with the help of some amazingly talented friends at Bartel’s studio and I ended up doing the vocals myself.

SEM: I understand that there will be a limited edition of the album available for Record Store Day 2017. What can you tell us about that?

Peter Visser: Since the LP and CD version of Damaged Good were only available in the Netherlands (apart from the download version worldwide), Stephen Judge from Schoolkids Records and us came up with the idea of doing something really special and beautiful for Record Store Day in America.

Carol: We feel really honoured that Schoolkids Records and Record Store Day in the U.S. chose our album to be released on April 22nd! This special edition will have transparent magenta vinyl and a gatefold and will only be available in North America. So far we’ve only seen photos of it and we can’t wait to see/hear the real thing!

SEM: How has the reception been of Damaged Good in The Netherlands and abroad?

Peter Visser: When you release an album you keep your fingers crossed and hope for the best, because you never know what the listener might think of it. Luckily the reactions were very positive to overwhelming from both the press and the fans. And also very important, from our friends. They can be rudely honest.

Carol: The first thing we noticed was that our original fan-base started comparing Damaged Good to our first album Palomine. What they basically said was that this new album was the one they had hoped we would record one day. To be honest, we had no idea people would be so enthusiastic and we’re really happy with all the positive response!

SEM: I see that you have some upcoming live shows in The Netherlands. What are your plans for the rest of the year?

Peter Visser: Apart from the final show of the tour on April 22, the same day as Damaged Good comes out on Record Store Day in the U.S. and also the same day as Carol’s birthday, we are doing some festivals in the summer and are already recording new songs!

SEM: I see that 2016 was the 25th anniversary of Bettie Serveert. The band’s perseverance is impressive and commendable. Do you have any advice for young bands just starting out? What are some important lessons that you’ve learned along the way?

Peter Visser: Always be honest to yourself, others and your music. Don’t do what doesn’t feel good. Keep artistic and financial control. Be respectful to everybody, especially to your crew.

Carol: This August will be our 26th anniversary, time flies when you’re having fun! I concur with what Peter wrote. Apart from that, I would say that it usually takes a while to learn how to be on tour as a band. Even if you’re the best of friends, you really get to know each other when you’re together 24/7. Not every musician is cut out to be away from home all the time, but luckily we learned our ‘lessons’ at an early stage and still love being on tour.