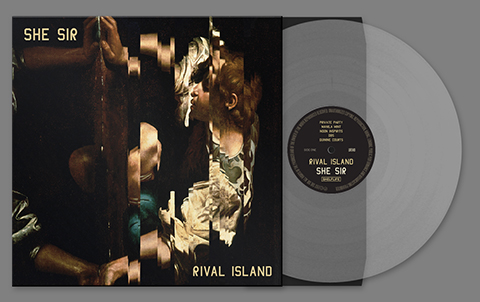 Having burst as if from a chrysalis in 2014 with their debut album Go Guitars, Austin-based She Sir return with their highly anticipated sophomore effort Rival Island. Again on soon-to-be-legendary Portland label Shelflife, this new record finds the band evolving even further from their two-thousand-aughts shoegaze roots, leaning into the many headwinds with soulful grit and a classicist grace. While having the good sense to have Louie Lino as their producer this time around (New Pornographers, Nada Surf, Doug Gillard et al) and to hand off the mastering to Joe Lambert, whose credits include The National, Animal Collective, and Deerhunter, the fact is that the material on Rival Island is so intrinsically strong, the band’s sound so, well, sound, that it may well be the easiest paycheck that either man has ever cashed. The album – released next Friday, July 21st, on limited edition ‘Black Smoke’ translucent vinyl (that’s the one we want) and milky clear vinyl – is, in a phrase, dreampop in excelsis, She Sir managing that rare counter-intuitive feat of soaring with creative abandon while remaining grounded in purpose and spirit. One of 2017’s most arresting records, we’re proud here at SEM to offer a sneak preview. Tap play, revel and sway, and don’t forget to scroll down for track-by-track ‘band blurbs.’ It’s the whole package, and it’ll make your day.