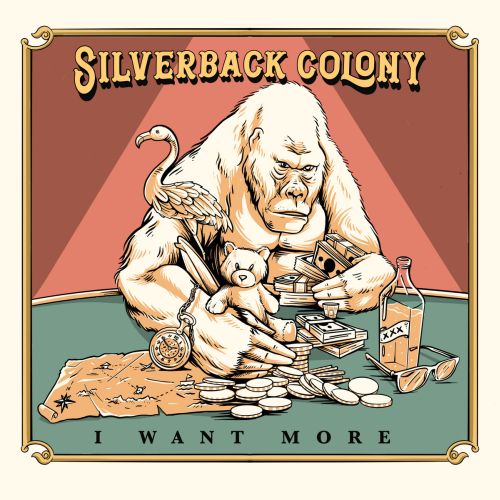 Minneapolis-originating alternative rock band/collective Silverback Colony blend country, psychedelic, and other influences into their bedrock rock sound, creating an interesting hybrid style that shines through on their latest single, the epic “I Want More.”

The exploratory track is an over-11-minute odyssey that traverses through emotively aching country, heavy alt-rock, spacey psych-rock, and even reflective piano pop.

Founded by Gabriel Douglas in 2011 (who is the mainstay of the constantly changing band line-up), and currently including Kai Brewster, Silverback Colony have previously released two albums, 2014’s …sounds like Silverback Colony: A North Country soundtrack and, from 2015, Silverbacked: Cover Songs Vol. I.

Silverback Colony have performed shows all over the United States, starting out in the Midwest and then making inroads to the West and East coasts, and becoming known worldwide for their stylistically hybrid music.

Stereo Embers is pleased to host the premiere of the (literally) expansive video for “I Want More,” which slowly pans through the vastness of star-sprinkled space.

“I Want More,” with its titular lyrics is a primal howl into the wilderness; a chafing against the restraints that keep you bound to your lot in life. Because there has to be more to life, right?…

The band dig into the meaning of the song, commenting, ““I Want More” was written from the focal point of finding out what you have is a good foundation, yet it isn’t an end point. Wanting more is part of the human condition.”

“The creation was a really cathartic postal service experience for [us], as Gabriel smithed the song and then Kai built a spaceship serviceable of many universes around it.”

“I Want More” is available on Bandcamp in various versions (clean, explicit, acoustic, and a remix):

Find out more about Silverback Colony: