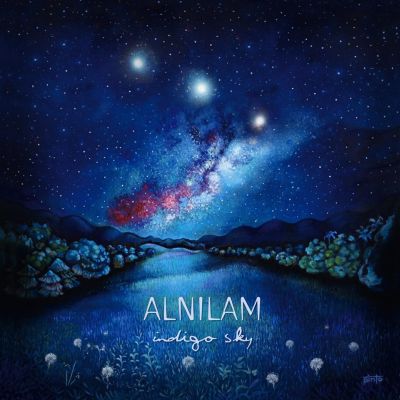 The band is named after the middle star in Orion’s Belt and the dreamy, expansive ambience of Alnilam’s songs fits perfectly with this imagery. Alnilam’s debut album, Indigo Sky, is slated for release on November 13th and album-opener “Lilac” is also the lead single. An accompanying video for “Lilac” was recently released and it adds a sweet, future-nostalgic visual dimension to the symphonic folk-pop song.

Gentle, but fast-strummed acoustic guitar starts “Lilac” off, with Elena’s voice materializing with a wistful tremble as she murmurs with prescient wisdom, “You don’t know this yet/but someday you’ll see/these will be the good old days.” A brisk, but subdued drum beat and bittersweet pulls of strings bolster her delicate phrasing and the mysterious feelings that emanate from the profound lyrics. The ballad-like pace unexpectedly, but enjoyably, speeds up even further as the song continues, adding brightly tinkling notes and an increasing intensity to the strings as they reach towards and achieve a poignant epiphany. Elena sings in an even more yearning tone that “The past is over and it’s gone / The future hasn’t yet begun.”

“Lilac” comes across as more than a song due to its lyrical content. Elena’s words do a rare thing – they capture a usually elusive, ephemeral moment in time, the ‘spectacular now’, and recognize and celebrate its power and import. It’s something that most of us forget to do as we get lost in the details of daily life – to take a look at the big picture and cherish the immediate moment. The lyrics not only touch upon the present, but also reflect upon the past and project into the future in a moving way, with Elena singing about how we have so many questions, but “…sometimes no answer’s all there is.” The video, which was filmed by Serhat and past bandmate Jordan Sommerlad, dovetails neatly with these themes, showing two children who at first act like adults as they drive up to a secluded shoreline. Once they get out of the car, however, and explore their natural environment, they’re taken back to their childhood, so to speak, running through the grasses, dancing around, and feeling the sea breeze on their faces.

“Lilac” is a touching, highly perceptive, and thought-provoking song and one that is worthy of the time spent mulling over its meaning in our own lives.

The band’s official site is here: