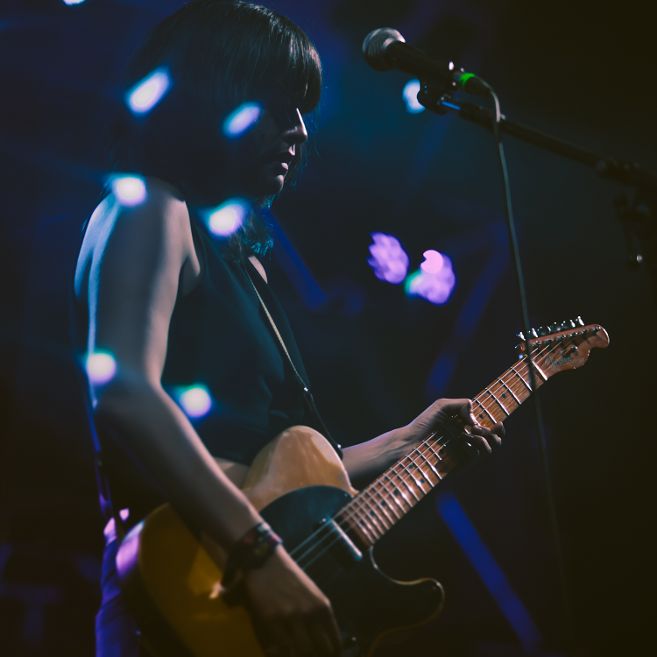 There’s a lesson one should learn and it should be learned early: No matter how long you live, there is, if you keep yourself open to them, no end to the drop-dead delightful surprises that’ll come happily rattling your music-obsessive cage. Whether through a network of friends, reading online or in publications such as Uncut or whatever the conduit (for your correspondent there’s little to compare to both this gig writing for Stereo Embers and hosting a darkwave show on the radio to bring hordes of newcomers to my door), the vast space of the ever-unknown holds musical riches beyond imagining just waiting for your discovery. And while in times past the path to such potential awakenings was limited to what might be gleaned from regional radio and/or whatever magazines you could lay your hands on at your local purveyor of such, by now of course the parameters have exploded to their digital limits and beyond, laying open possibilities – and origins – seldom if ever aforethought. Once one’s antenna has been thus adjusted, one naturally hears things, names whispered with some urgency across borders, this artist, that artist, listen to them, don’t miss them. Hence do we come to Tamar Aphek.

Well known enough in her home country to have been termed “Israel’s guitar goddess” by no less than Timeout Tel-Aviv, Aphek’s profile as defined by the scope and scale of her talents is such that one country – hell, one region – couldn’t contain her renown. Amazing on the face of it, it’s in truth no surprise once one knows her bio, the path that led her to her current status amounting to something of a lifelong résumé (top flight children’s choir, a decade of piano lessons, an intense stint at conservatory). The only question once she reached a creative crossroads was which illustrious path would prove most tempting. The answer arrived with some feral certainty via the conduit of a cheap electric guitar and even cheaper amp, the intrinsic power within providing instant catharsis, the simple act of plugging in transformed from your basic arrangement of wires and frets and scratched pickguard into a howling messenger, speaking a truth in the only languages that matter: feedback, electricity, and abandon.

Still young, Ms Aphek spent her woodshedding years in public with the bands Carusella and Shoshana, her reputation already building toward a legacy with intra-country tours that left take-no-prisoners impressions in their wake. Emerging from those experiences into her own creative skin, a mini-album (Colission) arrived in 2014 followed, a bit improbably for most artists, by a soundtrack recording to the movie Un Semaine et un Jour that caught the attention of the Hollywood Reporter among a host of other outlets and now we arrive at the breakout moment in the singer/songwriter/guitar maestro’s burgeoning career, a word that seems almost crass as it relates to a trajectory that has more the feel of a calling than anything else.

At the heart of all this? A fierce poetry of sound and intent, the fierceness apparent even when the tones and contours take on an ostensibly more refined form as is apparent from this second single from upcoming album All Bets Are Off, released – no, check that; unleashed – in the US by legendary label Kill Rock Stars on January 29th. Hypnotically daring, simultaneously clinging to and shredding recognizable ‘rock’ templates, the track carries its formidable weight with a avant-garde ease that suggests Rumours had it somehow been put through a Hendrix filter at the fiery gentle heights of his Band of Gypsys period. Such impressions aren’t to be unexpected given Aphek’s approach to creating music wherein she, as a for instance, “…wanted to write a Johnny Cash style song, but then dress it up in crazy Max Roach style drumming or Ethiopian rhythms.” Now, saying such is one thing, accomplishing it quite another, which is why the floor of history is littered with ultimately unrealizable ambitions of the otherwise smart and talented. Those that manage it most often carry it off with what appears an inspired ease, pushed by a kind of innate destiny, a light. It’s something one senses in Tamar Aphek, the same something that so many have seen in her throughout her journey to this point.

Not entirely unknown to American audiences, having been on tours in the States with Deerhoof, M Ward, the Editors and others and appeared at SXSW and Treefort etc, our guess here at SEM, on the strength of this single and just the impetus of her experience built up organically behind this moment, is that she’s soon to become quite well known indeed. Not just because she’s on KRS, not just because of her relatively unusual, somewhat exotic origins, but simply because of the irrepressibly dynamic depth of her talent. No guarantees, of course, but let’s just say this:  We wouldn’t bet against it. [album pre-order link:  https://tamaraphek.bandcamp.com/album/all-bets-are-off ]