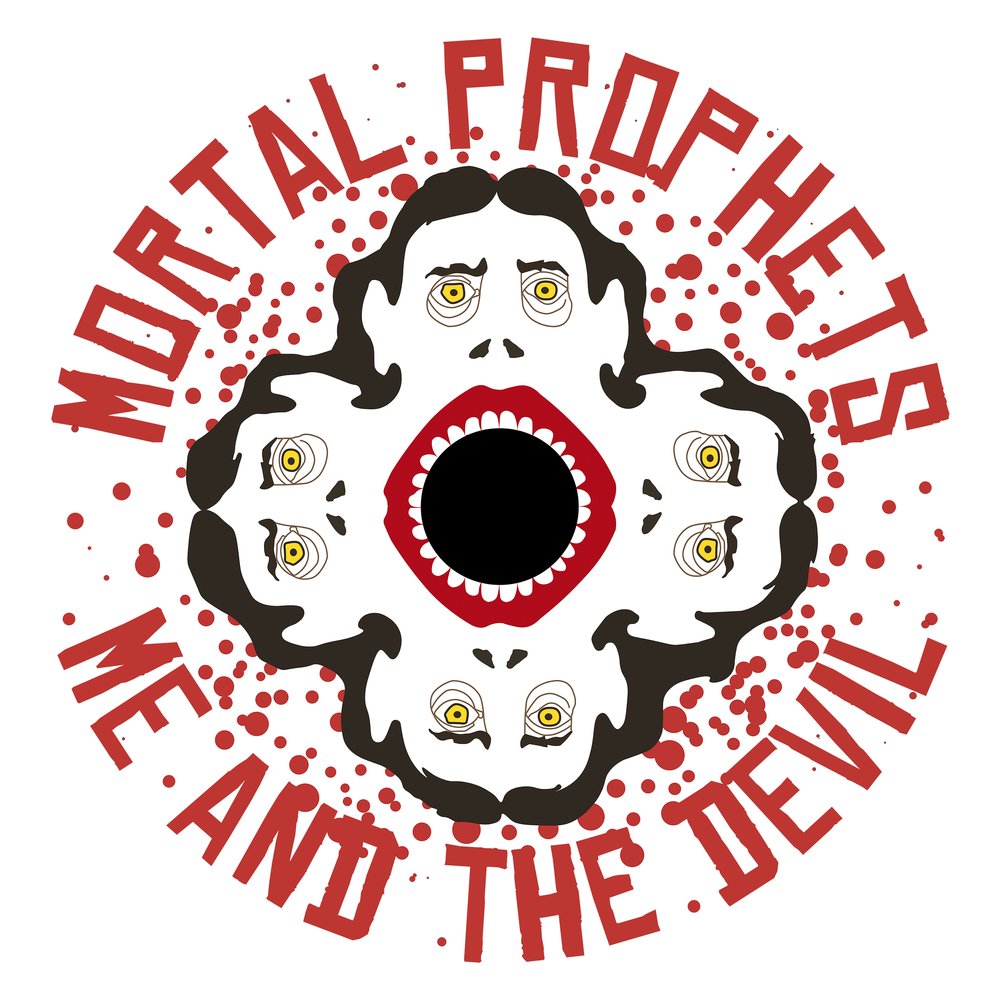 Like a fire-breathing ensemble risen from the ether with a fearless blend of genre-fucking intelligence driving them toward a type and level of musical adventurism that’ll leave any music nerd worth their salt dumbstruck in the bestest of ways, muttering ‘Be still, my ravenous heart’ beneath their barely-caught breath, NYC’s Mortal Prophets arrives in our all-too-cautious midst ready to blow minds with an almost wicked nonchalance. As approachable as it is take-no-prisoners, the John Beckmann-helmed Prophets’ sound reflects – if a bit blindingly – their stated mission to “dig deep into America’s primal scream.’ To this aim, with both the Stomp the Devil EP released in June (featuring no less than Gary Lucas) and today’s dual release of two singles from upcoming debut full-length Me and the Devil due out December 9th (itself with a bevy of guests including Colley, Rubyhorse’s William D Lucey and others), of which SEM is premiering the feverish re-write of that timeless blues standard “Baby Please Don’t Go,” Beckmann and company are delivering the goods like nobody’s business. It’s a delivery that strikes an especially raw nerve for someone as, umm, ‘seasoned’ as your correspondent, whose teeth were cut on early 70s rock’n’roll which, aside from the more progressive wing of that wild party, was itself, of course, weaned on the blues. In those days, it was a matter of intense importance to spend some serious time rooting around in, well, the roots of this crazed and avid cacophony that had so captured your heart. This meant, rather obviously, running oneself backwards into the Chuck Berry/Buddy Holly/Jerry Lee Lewis (RIP) era spawned by that scrawny kid from Tupelo that stumbled into Sam Phillips’ Sun Studios one day in 1954 but, more than that, hurtling further back into the blues that it had all built itself upon, be it the more feral Delta variety, Chicago’s birth of electric blues or just tracing the path Howlin’ Wolf carved in both those worlds (insert obligatory Robert Johnson reference here). For this writer, as steeped as he is in the post-punk era on which his reputation primarily rests, the whole and total truth is that I’d not have been in a position to be carried away by those adventures of 1978-1981 had I not already been caught up in the form’s incipient fervor. In short – and therefore – I love the blues for all the unvarnished, often raunchy and nearly always inspiring places it took me, which explains why the prospect of what we have before us today thrills me so. Wisely, by my lights, Beckmann has chosen not to try and exactly ‘sing the blues’ as they’ve been sung for generations – in 2022 that won’t really grab anyone by the figurative lapels except maybe those putting together staid blues festivals – but instead takes the raw dark spirits that illuminate them from within, that kind of anti-holy holy spirit that shudders and screams and twists itself into an inviolable truth no matter the listener, their location, their age, and raises it up to screech over the restless sepulchres of modern life, a Holy Ghost of Menace that springs eternal and we are thrilled to bring you this take on the old, deathless Joe Williams classic (or was it Bessie Smith? See the interview below). This being one of those instances where words will mostly fail to compare in eloquence what the music so effortlessly unfurls, we’re going to leave it here except to say that you can find Me and the Devil can be heard and purchased here starting tomorrow.

1) Morphine’s Dana Colley makes an appearance on this electrifyingly haunting number — how would you say this contribution helped intensify the track’s lush quality?

Thank you for saying it’s “electrifyingly haunting, ” I like that!  I’ve always been a huge fan of Morphine, and there’s nothing like a stroke of luck, as Dana is a great friend of the producer William Declan Lucey, William and I were discussing the song, and I felt it needed a sax, so sure enough William said he would ask Dana, and I said, “you’re kidding me right? Yes, let’s get him on board by all means.” I love his dark smokey and edgy baritone sax, he made a significant contribution.
2) This track is a reimagining of the highly popular Big Joe Williams blues track. What is that original track’s significance to you, and how did you approach creating a work inspired by such a classic?
Charlie Musselwhite did a terrific version of it that I came across on YouTube, and it really stuck me. So naturally I dug deeper as to the origins. I just love this song, the lyrics are so dark, desperate and sexy, seriously how can you not love it?It has been said that

“Williams played a electric nine-string guitar through a small ramshackle amp with a pie plate nailed to it and a beer can dangling against that. When he played, everything rattled but Big Joe himself. The total effect of this incredible apparatus produced the most buzzing, sizzling, African-sounding music I have ever heard.”

Around this time (1935) Big Joe was reportedly married to St. Louis blues singer Bessie Mae Smith, who he sometimes credited with writing “Baby Please Don’t Go.” So I’m really not sure who can be fully credited. It may actually be a song about a woman losing her man, guess it depends on who’s singing…