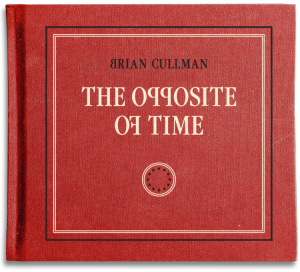 The name may not be instantly familiar but you’re going to wish it was. Though only on his second album, journalist and musician Brian Cullman not only has a riveting backstory but, more to the point, a plangent, evocative way with that most vaunted of song forms, the rock’n’roll singer-songwriter. Reinvesting experiences gathered first from falling, in his late teens, into a circle of buskers in London that included Nick Drake, John and Beverly Martyn, Sandy Denny, and Richard and Linda Thompson, then, upon his return Stateside, hanging with the likes of Robert Quine, Mark Knopfler, Syd Straw and Vernon Reid among a host of others before forming late 80’s – early 90’s band OK SAVANT with Gang of Four’s Sara Lee, Wings’ Steve Holley, Reid and Larry Saltzman from Paul Simon’s band (which isn’t even mentioning his time, umm, culling influence from northern Africa, the Middle East and Caribbean), the depth of Cullman’s well-earned mojo is apparent everywhere on The Opposite of Time. From “Times Are Tight” swinging through that intersection where Graham Parker sideswipes Townes Van Zandt to the poignantly bar-rocking “And She Said” that boasts some ‘David Lindley’s on fire!’ guitar to the more scaled-back, soulful balladry of “Hands of the Rain” and the Basement Tapes-worthy, fret-shimmering “Tender Wheels” (to name but a handful), Cullman here claims his place on that mantel whereon the names referenced above and many more beside (Jackson, Lucinda, anyone you wanna name). At risk of earning the nickname ‘the magazine of serious understatement,’ Stereo Embers is proud to present the exclusive album stream of The Opposite of Time, released February 26th on Sunnyside Records.