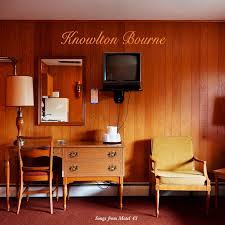 What would a train sound like if it could express the loneliness it feels speeding through a dark deserted night? If I were forced to guess it would sound eerily similar to the sigh and echoed dual harmonicas announcing the lazy swoon of a groove that opening track “Summer Sun” luxuriously occupies on newcomer Knowlton Bourne’s debut Songs from Motel 43. Dusted by what you might call a languid brashness and the drawl of some hot afternoon blues, the song, as a calling card, is resplendently astute, all the way down to the bubbling space synth outro that pulls that train down some cleverly unexpected tracks. As made immediately clear thenceforth as first single “Hangin’ Around” kicks off with the ‘slow funk jam’ setting on a bedroom Casio before sliding into its laconic Vilesque mojo, Bourne is not your standard trooper in the Gram Parsons Memorial Marching Band. Though country touches sparkle everywhere – the young man reps his roots with an inescapable down home authenticity – Knowlton’s version of Cosmic American Music© eschews the Nudie suit baubles and the homagistic motifs that come with it (whereas pedal steel is present here and there, you won’t hear a single lap steel crying anywhere on this record) for something more akin to denim-clad ameritronica. In many instances – the bucolic gallop of “Greyhound,” the soulful, ennui-laden sway of “I Can’t Tell/Run” – the sprawl sprawls until just the moment it needs hauling in, when Bourne slips the reins on and does it like it’s no big deal, does it with the swift immortal reflexes of the precocious 23-year-old he is.

Essentially, then, the gentle strum that hides the anxious, slightly askew heart, equal parts willowy and angsty, Songs from Motel 43 – and its author – belies its range of influences while embracing them with a warm Southern hug. The scrapes on the acoustic’s fretboard during “Done Movin’ On,” while inescapably iconic, are mic’ed up so high they pierce the piece’s simple beauty with the sense of a jabbing sharp pain, making it seem like this fresh-faced, barely-begun-shaving kid’s possessed down to his marrow by Bukka White or somebody. “Motel 43″‘s country clop could’ve been programmed by Conny Plank, the pedal steel haunting like a Louisiana synth and yet the track still rises and drifts all misty and fine, its cantoring existentialism both homespun and world-weary before its author’s time, while “The River (For Nels)” – one assumes Cline? – bristles with the quiet restlessness of a young man weighing young man options, the song heavy with all the ruminative equivocation suggested by Bourne’s doubled up guitars – a heartfelt acoustic strummed and picked with a lifer’s surety, an electric picking out an incidental lead that’s as country sweet as it is awash in a tossed-off rockist nonchalance – bringing it all back home where it inevitably belongs, the baptismal flow of the titular waterway still well intact.

The pick, though, may well be “Glow,” as luminous as its title and almost searing with its deliberative emotive tone, closing out the album in a kind of majestic humility that, once again, and for absolute certain, establishes Bourne as a (ahem) born standard-bearer of the transcendent singer-songwriter class. He may not exhibit the bedizened leitmotifs of the sainted GP but Songs from Motel 43, at the very least, suggests that a copy of the record should be sent to Keith Richards and pronto. A fellow traveler has arrived.