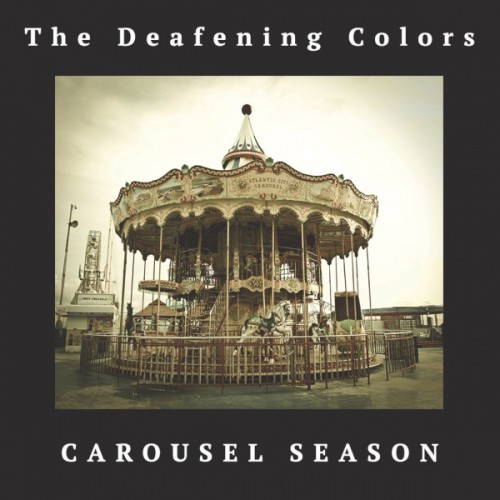 Who knew that a previously unknown branch of the Wilson family are alive and well in New Jersey?

Well, if you didn’t, it’s time for you to meet New Jersey’s best kept secret, The Deafening Colors, a band consisting of multi-instrumentalist Cris Slotoroff and vocalist John Paul Arthur.

Slotoroff and Arthur wrote their second album, Carousel Season, in the former’s bedroom in Weehawken, NJ, but the record thematically focuses on where the duo grew up: Atlantic City and Ocean City, NJ and their surrounding areas.

But without great songs, The Deafening Colors’ thematic interests wouldn’t matter. So it’s a good thing that Carousel Season is chock full of addictive tunes. Opening track, “Parkway South,” and much of Carousel Season sound like The Beach Boys and Yo La Tengo have gotten together for a jam session. In fact, Ira Kaplan himself could be playing lead guitar on “Diving Horse’s Ghost”; single “Jerry Ryan” hooks you with shoegaze and pulls you in with indelible harmonies, which recall the pet sounds of Brian and Carl Wilson; “Past Time” (perhaps the finest cut on the album) is structurally complex and infectiously rhythmic; and Arthur’s vocals on the title track are gorgeous.

These songs and the rest of the Carousel Season sound like the endless summers of youth, all timeless harmonies and great surf and noise guitar, which spin around in your head long after the album ends.

You can download Carousel Season here and enjoy The Deafening Color’s responses to SEM‘s “Scouting Report” and some of their songs below:

RECORD LABEL: We don’t have one. We make this stuff in my bedroom.

DESCRIBE YOUR SOUND IN ONE SENTENCE: I grew up surfing all the time (and still do,) so probably something like “New Jersey Surf Rock”; it’s not the kind from California with palm trees, cool breezes, and sunsets – New Jersey surf rock has traffic on the way to the beach, rusted drainage pipes emptying who-knows-what into the lineup, and a million people paddling for the same set you are.

PROUDEST PROFESSIONAL MOMENT: Finishing our record, Carousel Season, by ourselves entirely: instruments, vocals, micing, engineering, mixing, mastering, etc. It’s all ours and no one can take it (for better or worse…)!

THE SONG YOU WISH YOU’D WRITTEN: “A Hard Rain’s A-Gonna Fall” by Bob Dylan and “When You Sleep” by My Bloody Valentine.

FIVE MUSICIANS YOU ADMIRE: Elliott Smith, Kevin Shields, all of Yo La Tengo, Stephen Malkmus, everyone who is/was in Sonic Youth or Wilco. Whoops, that’s six. This is a hard one…

ALBUM YOU CAN’T STOP LISTENING TO: All time? That’s easy: Rancid’s And Out Come the Wolves. At every moment of my life starting in the sixth grade or whatever, that album has been played and it’s been blindingly awesome. Yankee Hotel Foxtrot is my favorite ever, though, Loveless is a close second, and You Forgot It in People from Broken Social Scene is up there too.

DESCRIBE YOURSELF AS A KID: I haven’t shut up since, allegedly, 10 months old. I got sidetracked easily, and I was a terrible student. I suppose that’s why I teach high school English now: paying back that debt to society! I’m pretty much the same person I was when I was a kid, though…

THREE THINGS THAT KEEP YOU UP AT NIGHT: Recording music, reading, listening to music.

LAST BOOK YOU READ: I recently re-read Salinger’s Nine Stories for the first time since high school. It’s still awesome, FYI. Last NEW book, though? Hm… I’m usually reading something related to school, so my “leisure reading” takes place in the summer. Oh, wait a minute: somehow, I hadn’t actually read A Raisin in the Sun and had to for school. Man, I love a good play.

THINGS WE’D FIND IN THE TRUNK OF YOUR CAR: Soccer cleats, surf racks, towel, assorted music equipment, water bottle(s), other soccer cleats, surf wax, sand, a few soccer balls, board shorts… Yeah, haven’t changed since I was a kid in plenty of ways…

HARDEST PART ABOUT YOUR JOB: Let’s see…hardest thing about teaching 11th grade English… You might think “dealing with the kids” or “grading papers” but neither of those are tough if you’re actually into the job. I actually like grading papers, and my students are great. Actually, for me personally, the toughest part is assigning them the little things that need to go in the grade book. Fortunately, I work for awesome people who seem to get me and the way that I like to do it, so hey, no complaints on this end. Maybe making money in the summer? That’s tough. I wait tables.

FIRST THING YOU DO WHEN YOU GET TO A NEW CITY: Same thing I do everywhere – get a cup of coffee. Then, I just kind of start walking. I’m a magnet for weirdos and weird experiences. I think I have one of those “Sure, I can trust you with everything!” faces.

WHAT WORD DO YOU OVERUSE IN CONVERSATION?: “Solid.”

WHAT WILL THE TITLE OF YOUR AUTOBIOGRAPHY BE?: It’s a shame Bukowski took Slouching Toward Nirvana, because that’s damn good. How about this one: “Who Says You Can’t Make Up Everything in Life as You G…”

FAVORITE LATE NIGHT TV SHOW: I honestly don’t think I’ve turned on a TV to watch a show in maybe seven or eight years. I realize how pretentious that sounds, but it’s true. I do, however, obsessively follow the English Premier League and MLS as well as all the other requisite competitions (UEFA CL, WC, etc.). I’m a soccer player, coach, and all around fanatic.

BEST ALBUM TO PLAY AFTER A BREAK-UP AND YOU’RE HOLDING A BOTTLE OF VODKA AND SOMETHING SHARP: Depends on the intended result. If you know it’s for the best and you’re hopeful for the future, it’s got to be No Depression from Uncle Tupelo. If you’re looking to finish the job, Elliott Smith’s Either/Or, XO, or From a Basement on the Hill should ensure cessation of one’s pulse by Side Two. Also, Nick Drake’s Pink Moon and Ladies and Gentlemen We Are Floating in Space from Spiritualized both work great here. Wow… why do I have so many of these?

INDULGENCE YOU REFUSE TO GIVE UP: I drink so much damn coffee. I don’t care who says it’s bad. I don’t really remember my first kiss very well, but I remember the first time I fell in love: it was having coffee on the Ocean City boardwalk when I was 14. I remember how it tasted and everything. But nah, I’m not addicted. I can stop any time I want.

DESCRIBE YOUR SOUND IN ONE SENTENCE: All the sounds, all the time.

PROUDEST PROFESSIONAL MOMENT: Our first show using the name The Deafening Colors was in some guy’s barn in central Jersey—there were too many people to fit comfortably into the barn, so he gave us permission to knock down a wall with some sledgehammers before our set. So we did. Also, I was dressed as Spiderman and, if I remember correctly, Cris might have been a Teenage Mutant Ninja Turtle? We played with three guitarists and a drummer, but no bassist. It didn’t really make any sense.

THE SONG YOU WISH YOU’D WRITTEN: Does “Song of Myself” count? If so, section six of that.

FIVE MUSICIANS YOU ADMIRE: Bach, Miles Davis, Lou Reed, Bob Dylan, Jeff Mangum, to name the first five that popped into my head…but there are so many more.

ALBUM YOU CAN’T STOP LISTENING TO: The Earth Is Not a Cold Dead Place by Explosions in the Sky. I listen to it every time I write, and I write pretty much every day. I can actually feel myself become more calm almost instantly when I start listening to it.

DESCRIBE YOURSELF AS A KID: Annoyingly, distressingly Socratic.

THREE THINGS THAT KEEP YOU UP AT NIGHT: Novels, records, and tendinitis.

LAST BOOK YOU READ: The Mother Tongue: English and How it Got That Way by Bill Bryson.

THINGS WE’D FIND IN THE TRUNK OF YOUR CAR: CDs that are in the wrong cases, books, notebooks, empty bags, bags filled with empty bags.

HARDEST PART ABOUT YOUR JOB: I’m a librarian, so my job is pretty much awesome all the time.

FIRST THING YOU DO WHEN YOU GET TO A NEW CITY: Wander aimlessly and talk to people.

WHAT WORD DO YOU OVERUSE IN CONVERSATION?: Word.

WHAT WILL THE TITLE OF YOUR AUTOBIOGRAPHY BE?: Nothing To Say: The Wordless Autobiography. It will just be a notebook, maybe with a stupid-looking picture of me on the cover? That way people can make up stories about who the guy on the cover is, and those stories will be just as true as whatever the truth ends up being, I guess.

FAVORITE LATE NIGHT TV SHOW: I don’t have cable, but my wife watches a lot of Gilmore Girls, and I really genuinely love it.

BEST ALBUM TO PLAY AFTER A BREAK-UP AND YOU’RE HOLDING A BOTTLE OF VODKA AND SOMETHING SHARP: Exile in Guyville.

INDULGENCE YOU REFUSE TO GIVE UP: Paneer Tikka Masala.

WORDS TO LIVE BY: “A good traveler has no fixed plans and is not intent upon arriving.”