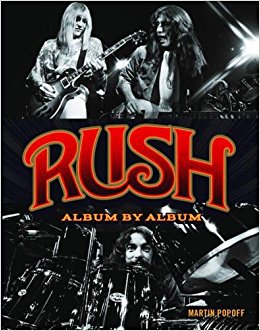 What results is a fun, fan-based journey through the work of one of the most influential, popular, and artistically gifted bands in the history of rock and roll.

Despite Popoff’s extensive and exuberant knowledge of Rush, he never functions a “sage on the stage”; rather, he elicits discussions that bring out each participant’s expertise and passions.

Every album discussion in the book is worthy of comment, but a few stand out and showcase Popoff’s vivacious and informative approach.

Popoff sits down with Hammett; Ralph Chapman, who worked on the documentary, Rush: Beyond the Lighted Stage; and eminent guitarist Paul Gilbert to chat about Rush’s classic 2112 album (1976). Hammett gives insight into Alex Lifeson’s guitar work on “Something for Nothing” and downplays the notion that Neil Peart overplays on the album. Chapman, on the other hand, lightens the mood by talking about pot smoking and “A Passage to Bangkok.”

Popovich and Sean Kelly, a Toronto-based guitarist who’s played with a cornucopia of notable acts, join Popoff to delve into 1981’s iconic Moving Pictures album. Popovich intriguingly argues that Moving Pictures was the “last prog rock album that was commercially acceptable.” Kelly talks about how such an album could break through to a wide audience, given the climate of the times. The trio praise Moving Pictures as an expansive record whose radio staples (“Tom Sawyer” and “Limelight,” in particular) incorporate prog elements in pop songs, while simultaneously presenting Rush’s last prog epic, “The Camera Eye,” which Popovich says “is a lot of hard-core Rush fans’ favorite.” And Kelly gives a fascinating account of Peart’s “graduation” from Ayn Rand’s Objectivism to more sophisticated conceptualizations of human freedom.

Popoff points out that Rush’s twentieth studio album, Clockwork Angels, is their first concept album. One of his interlocutors, Eddy Maxwell of RushCon, helpfully breaks down the album’s storyline and enthusiastically talks about the sense of spontaneity of the album. Nelson concurs, weighing in on the album’s raw production. He also provides a valuable analysis of what Geddy Lee deems his “flamenco way of playing the bass.”

This isn’t to say that Rush: Album by Album is a hagiography. Lee, Lifeson, and Peart receive their fair share of criticism throughout: Caress of Steel (1975), Hold Your Fire (1987), and Presto (1989), in particular, are called out for their weak spots.

As in many of his other books, Popoff is sure to include an amazing array of color pictures of the band, memorabilia, 45 sleeves, album covers, etc. But the best thing about Rush: Album by Album, in addition to its seminar approach, is that it can be read in many ways: for example, straight through as a narrative history of Rush by way of their recorded output, or as a reference book when one wants to learn more about a particular Rush album.

Perhaps the best way to read Rush: Album by Album is the way that I did. Get started by dropping the needle on your favorite Rush album—Vapor Trails (2002) in my case—opening Popoff’s book, and reading the chapter on the album as it plays. This method of reading/listening entertains and enlightens, just as Rush: Album by Album does in its entirety.