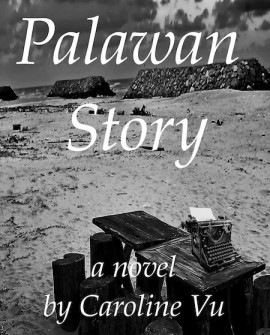 The stories we tell and the stories that are told to us are recurring lines in Caroline Vu’s Palawan Story, a debut novel that recounts a young Vietnamese girl’s experience growing up in the wake of the Vietnam War, her flight from the newly-turned communist country to the refugee camp, Palawan, in the Philippines and, at last, her immigration to the United States and later, Canada. Or, that is the plot over and through Vu weaves her delicate– yet profound– observations (and critiques) about the interconnectedness of personal and public identity, individual and collective memory, and the relationship between daughters and mothers.

Perhaps it’s odd to write a novel which begins with the 1968 Tet Offensive– “Tet” the lunar new year in Vietnam and typically a time of truce– which saw countless civilian (read: Vietnamese) deaths at the hands of Communist soldiers today. And yet, the perspective, voice and scope of the piece speaks volumes. It is– yet, isn’t–Vietnam. Instead, the importance of stories are highlighted, like the Vietnamese story of family or the American Dream played on television sets and colliding with the bleak reality of the Vietnam war. The novel’s protagonist, Kim watches war scenes on a television at home which also plays reruns of American sitcoms. Kim’s world is a world of colliding stories: the stories her mother does not tell (the stories of silence) the stories of her “Aunty Hung,” the fantastical stories of her grandmother and the stories she herself invents when her father disappears.

She tells herself she sees her hunchback father on the evening news, pushing a woman out of the way to board a helicopter bound for America. For Kim– and for much of the novel– the missing hunchback father is alive and living in America, awaiting a family reunion. These (in a way) parallel the stories Kim tells herself about her mother: her mother’s coldness, her distance, her cruelty.

Her father is at once alive, missing, a hero, a coward, a martyr, and dead. Each story about him is presented in the level voice of a person who wants to believe, to understand. Conversely, her mother is presented as cook, caretaker, dictator and victim.

Stories are the only way we, as readers, come to know the characters of Palawan Story.

Even the protagonist herself is something of a mystery: What happened on the boat [to the refugee camp at Palawan]? she is asked again and again.

Each time, she gives a different response–in part because she cannot remember (or can she?)– but the layers of her responses construct a cultural narrative about a particular time and place. It is not Kim’s memory which surfaces first: instead, Vu offers a collage of refugee stories from both genders and all ages.

And so, the novel’s power comes not so much from shattering revelations, but by the layering of these kinds of stories: the things we tell ourselves in order to move on, in order to keep hoping, in order to believe that life is worth living.

In order to be who we believe we are.

Palawan Story, in other words, isn’t another story about Vietnam. Or, really, about any war or any family in particular. It’s a rumination about mothers and daughters, people and the wounds that can and cannot heal. It’s a story about the importance of stories for not only individuals but for societies. Kim ruminates: When a personal recollection fades, what would be left of civilization? Without people’s memories, who will make sense of history?

Vu challenges us as the readers of these stories, to pull these pieces together to make some sort of cohesive sense. She challenges us to cry when the characters, as broken as they are, cannot. And she challenges us to ask ourselves if  we cannot bear witness to the stories of others, what sort of world can we hope to create?

Palawan Story is not just a novel. It’s an argument whose main conceit is if we hope to not merely survive but to cultivate, we have to first travel back to the roots of ourselves.

But most importantly, we cannot forget to remember, no matter how painful it may be.