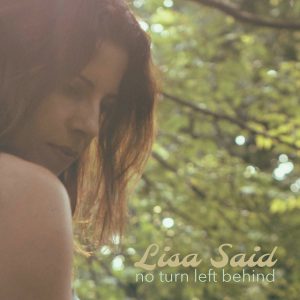 As laid out in lightning sketch detail when SEM premiered the first track off her debut EP First Time, Long Time last year (“Hard to Brake” also opens No Turn Left Behind), Lisa Said isn’t so much full of surprises as made of them. While we ask that you click that link above so as to avoid a full rehash, suffice to say that the fact that the American-born songstress grew up in Chattanooga the daughter of a Bedouin mother and a Pharaohic father that had moved to the US in the early 70’s so Mr Said could do his residency at the University of Tennessee says just about all you need to know about both the fundamental tension brought to this work and the hereditary strength of character that helped her marshal the many puzzle pieces of it to fruition, a process requiring Job-like patience, an undepleteable store of self-belief, and not a small amount of nascent talent (enough, in fact, to attract the likes of Jon Carroll, Andrew Toy, the renowned Dischord-ian Don Zientara – co-producing here with Said – and a dream list of others to help shape the final result).

The product of much life lived and much music played in her still-young life, the quality of Ms Said’s voice – the one sung in as well, and especially, the one these songs are written in – nonetheless surprises. Beyond the race and swing of that previously-covered opening track, there’s the vulnerably tough-as-nails fatalism of “Comes and Goes,” the singer matching in tone the violin-led (Kip Jones) seesawing instrumentation as she zig-zags her way across the line of certainty we’ve all gotta figure out how to draw; there’s the sneakily catchy “For Today,” sparking a downtempo resilience, not least due to Seth Kauffman’s tasteful punctuating guitar interjections and the Band-evoking warmth of Jon Carroll’s organ work; there’s “Travelling Minus Zero”‘s moving soundscape, prominently featuring both Jones’s violin and mandolin plus Carroll’s lowing accordion, that beyond honoring the Dylan inference in tone and emotion, is a melancholy, understated blockbuster of a track that Matthew Ryan wouldn’t mind laying claim to.

And there’s plenty more beside – “Once in a While”‘s lovely, twinklingly sad-gorgeous tribute to both the Bakersfield sound and a night at the Ryman Auditorium, Toy’s tabla-like percussive nod to Said’s heritage on “Been Around,” “One Too Many”‘s late night serenade to the desperately lovestruck that closes the album with a kind of keening bravado – all of it draped in a sound that’s countrified lush but intimately sincere, attributes that, while surely the result of all that patience meeting all that talent and converging in the trailing wake of Ms Said’s pen, will regardless ensure her of a lasting and rewarding future. √√√½ [No Turn Left Behind available here]

The fact that it’s likely the only file-sharing musical partnership between an artist in New York City (the polymathic Lane Steinberg) and one in Kiev (the persistent enigma Alexander Khodchenko) shouldn’t dissuade you in the least from believing that it’s also by far the best of such collaborations no matter how many of them may follow in 8X8’s wake. The pair, who’ve never physically met and in fact haven’t even spoken with one another, have set the bar so ridiculously high on newest full-length Inflorescence and their two previous (Azalea’s Room in 2013, The Anatomy of an Apricot from 2011) that the hyperbole of your statement when you make it (and you will) is safe from challenge for the rest of your lifetime and that of your many progeny.

Exhibiting a lucid dexterity in all things canonical in the pop sonic universe, be they shameless-but-oh-so-sharp Beatleisms (the predominant strain at first album-long glimpse, not least on “The Essence” and the Strawberry Fieldesque opening of “After All is Said and Done”), moments of inspired Big Stargazing (the aching “See The Madman,” quite prescient as I write this in the fall of 2016), or the more ornate end of the popsike spectrum such as casually baroque “The Six Fifty Three” (the subtle subterfuge of bongos and sitar!), the two have created a rather flawless amalgam that regardless of referents sparkles afresh with an unhurried energy and a relaxed verve. Steinberg and Khodchenko know and respect their history well enough to not repeat it.

Hence, while pulling from a similar playbook as were Game Theory and Elliott Smith on the likes of “My Summertime High” or pricking our memories of the Move in league with Procol Harum on “No More Second Chance” or betraying a healthy familiarity with the brittle pop negotiations between the Dylan and Donovan camps circa early ’66 (the Kooperized ecstasy of “Bubbles”), the tracks in the end simply strike as what they are: deft, highly satisfying pop gems such as virtually no one’s capable of anymore. Even as Inflorescence slackens down the homestretch, landing the album ultimately in “Perspective,” the kind of universalist ballad Ray Davies has only rarely managed since his mid-70’s peak, we’re still gifted here with a record that’s as much as anything the 2016 torchbearer for a dying artform that, unsurprisingly to some of us, is proving immortal. √√√¼ [Infloresence available in digital and CD forms here] 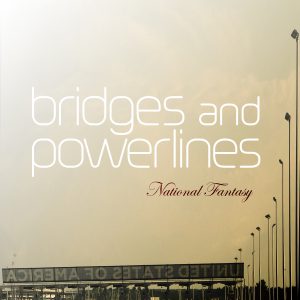 What often happens, as so often stated in these reviews, is albums come at you out of nowhere, a nowhere that comprises all 360 – hell, might even be 370 – degrees, a prospect that by its very definition turns the poor writer, all open ears and hope-filled heart, in a constant dizzying circle. It’s an accelerating carousel ride we all love (or at least we better; why else bother?), gladly clambering on board day after day because we know by now it’s a steady bet that another jewel by a heretofore unknown – to us – band will come spinning out of the blur and hover in front of us for one sweet pop grail moment, a moment long enough for us to enthuse, rejoice, write a few words then slot said record up on the shelf of keepers. You just read about a couple up above and now here’s another.

Two meticulous years in the making, National Fantasy by New York band bridges and powerlines (all lowercase, please; the music’s capital enough), released October 7th on Devise, is, for all that, a pretty straightforward affair. Brisk American songs meant for joyous consumption, executed by a fivesome – Andrew Wood, Pete Mucek, David Boyd, Keith Sigel, Mason Ingram – with a sharp ‘new wave of the New Wave consciousness (no surprise as the band’s cited influences as per their Facebook page are “1979 plus some 1998 and a bit of 1967;” so, just like the original class, then), guided into existence by their longtime producer Kieran Kelley who, having dealt with the likes of Sufjan’s Illinois, is well accustomed to the needs some artists have for a deeply subtle complexity. It’s a delirious pairing.

“The Twin” kicks us off with the tight joyous accumulation of all the usual suspects – the plunging punch of drums, a couple chamfering synth lines (one bass, one set at the Depeche line) soon joined by a pair of (twin?) guitars in dual states of precisely-meshed restlessness, an acoustic layered at the side – all flowing like pop rock ambrosia around an eventual vocal that clings with strength to the line dividing nostalgic yearn from modern romantic angst. Frankly it’s the kind of classicist sound, melodic as fuck, we can’t help but live for and it’s seconded, thirded, fourthed and fifthed right down the tracklist.

The title track is all tumbling grace and hurt that’ll have you staring off into the distance with one of those beautiful aches of longing, “Even Killers Need a Home” brims with a likable indie menace, “Closing In” is claustrophobic pop that keeps its sanity by shooting off Sparks, the mild thunder roll of “Before the Show” has the chiming open-spaced tempo of the road to it, “XOXO” is nothing less than a synth-heavy Cars hitting the college circuit and might just nail the album’s most irresistible groove in its last racing minute, while “Lindsay,” its mood more restrained, the atmosphere conflicted, still manages to come this close to dipping into “Starry Eyes” territory and “Free Yourself” sets out its stall in that nether area between Petty-powered radio rock and the Flamin’ Groovies’ canny appropriations thereof, which we’re certain you’ll agree is not a bad place to be in this or any other time.

Enviably cool band name, an album title worthy of a major American novel, and the songs to match, which isn’t even to mention the cellar studio they’ve constructed themselves nor the venue – Gold Sounds – they built and opened in Brooklyn, the stars have finally aligned for bridges and powerlines, and it’s just our good luck to find ourselves spinning in the same orbit. √√√¼ [buy National Fantasy here]