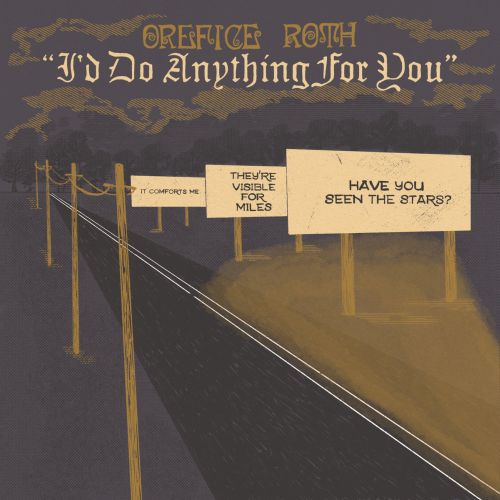 Ohio has a mythical charm for music lovers. Tracy Chapman, The Isley Brothers, Guided by Voices, The Breeders – the Buckeye State has been the birthplace of some truly amazing songwriters and performers.

What is it about that state that attracts and inspires musicians? Perhaps it’s the fertile valleys between the Appalachian Mountains and the Great Plains that hold sway on the mind with visions of bountiful harvests.

Now the music project Orefice Roth have set out to prove themselves to be included in the illustrious list of accomplished Ohioan artists and acts with their latest single “I’d Do Anything For You.”

Orefice Roth is a collective of musicians led by Northeastern Ohio resident Skylar Keffer. Though the various musicians work with him come from across the US, there’s a Midwestern twang that lies buried at the heart of Keffer’s music.

“I’d Do Anything For You” reinterprets the “high lonesome” prairie-based sound into something modern, dreamy, and gritty. The backbone of the track is an arpeggiated guitar part, warbled and delayed, as if it’s emanating from an old truck driving down I-75 blaring AM radio.

Keffer’s voice walks the fine line between earnest and passive, a tribute to the writer’s sense of self-awareness. Drenched in echo and rife with harmonies, Keffer’s vocal melody is the heart and soul of the single.

Halfway through the song, the drums become spastic and intense. It’s one of those musically genius moments, removing the listener from the calm, steady flow of the first half of the song. And as the band sinks back into that opening groove, it’s like returning home.

“I’d Do Anything For You” in many ways is about the frustrated, warped sense humans have of “home.” Keffer recalls that the song “depicts my self-made observations of some of the foolish and naive ways I’ve approached relationships in the past.”

Human bonds offer us a chance at finding the place we belong. Keffer continues, “The entire thing is a scale model made to illustrate my absolute refusal and downright rejection of reality in the face of a flawed, one- sided, and extremely damaging relationship.”

Keffer’s observations about the human condition are reinforced by the band’s channeling of Country & Western motifs through a dreamy indie rock soundscape.

“I’d Do Anything For You” is a testament to the powerful hold of the “high lonesome” sound in modern music. From Hank Williams on down to Waxahatchee’s Katie Crutchfield, the legacy of Country & Western is alive and well today. This new single from Orefice Roth continues and adds a new dimension to a well-storied musical tradition.

“I’d Do anything for you” is the single off of Oreifce Roth’s first EP, Please Protect Me, that arrives on August 13th.

Keffer kindly took part in an insightful Q&A about his music and meaning:

Stereo Embers Magazine: Was this song recorded over the pandemic? What was the recording process like, with members of this band scattered across the country?

Keffer: It was recorded during the pandemic. I think the pandemic is still going, right? This song in particular was recorded by the core of Orefice Roth. All creatures of Northeast Ohio. We have songs in the can that feature members from other parts of the country that will be released later this year. We do this both out of necessity and in the interest of cross-pollinating pockets of musicians that ordinarily would not get the chance to do our work together. The necessity, being that in order to achieve the rate of output we desire, we can’t approach it regular. Inconsistency in process to reach a certain consistency of output.

SEM: You’ve talked about reinterpreting the “high lonesome” sound in this song. How do you feel the song reinterprets those musical themes and motifs?

Keffer: Yeah, I call it “Midwestern high lonesome” partly because I grew up watching my parents play in bands that played a variety of American folk styles. Pedal steel, violin, button box, and other American music sounds formed my brain before I started in on my own craft. I really don’t know what other people hear in my songs, and comparisons are flattering, but generally leave me confused. All my songs start on an acoustic guitar. This song in particular has elements of ragtime guitar playing in it. It’s all mangled and the old cured skin of those finger-picking traditions get stretched over new frames. Whether there’s modulation, divergent rhythmic elements or whatever… It’s all Mother Maybelle to me.

I’ve also heard the high lonesome sound as being described as another way to say it has soul. And the Midwestern part is added not only because of our location, but because of the disposition associated with the Midwest. I’m not going to reach out to you in an over the top theatrical way. You’re going to have to meet me. This is a conversation and not a one-sided assault. Put the work in and you’ll meet me toe to toe. I’ll smell your breath and you’ll smell mine. That’s what I’m here for. That’s what I’m doing no matter what.

SEM: Do you remember what you were listening to when you made the song? Any artist that directly inspired it?

Keffer: I wish I could clearly remember what I was listening to when I wrote the song. There are two types of songs. The first kind of song is the kind that all comes out at once and it’s started and finished in 10 minutes flat. The second kind of song is the kind where it comes over a period of weeks or maybe a couple months; like chiseling something out of a block of marble. This song is the [actually the] 3rd kind of song. It developed over about 6 years. The lyrical theme and trajectory stayed the same, but the song structure was built, bent, recycled, and destroyed over years and years. It turned out to be maybe more of a piece of music than a song; more through-composed with little repetition of song parts. It moves in a different way than a traditional verse, chorus, verse, chorus, bridge, chorus, end-type of creature.

SEM: What is it like being a band from Ohio? How do you feel like the landscape of the state influences your songwriting?

Keffer: Growing up with the internet takes the importance off of regionality in the ways it used to mean a lot, but I guess Ohio keeps your ego in check. You don’t make things here because you think you’re going to change the world with your art. At least that’s how it’s influenced me. You just make things because you have to. It makes me focus in a more craft oriented way. Not trying to reinvent the wheel. I’m not trying to shock you or blow your mind. I’m just trying to have a moment with you. I really have no idea if any other artists from Ohio would agree with me on that, but that’s where I’m at on it. I also think that some incredible things come out of Ohio and the Midwest in general because we’re so far behind in terms of trends. We’re years behind the coasts. So if you’re trying to latch on to trends, by the time it reaches us it’s already gone through its most fertile and primordial phases on the coasts. The most effective way to go about it here is to find something that is true and resonate to you and just stay your course through the ups and downs of how what you’re doing aligns with the trends we see in Pitchfork or whatever. Work on your craft and stay the course. Stay the course. Sew it down or sink it.

Find out more about Orefice Roth: