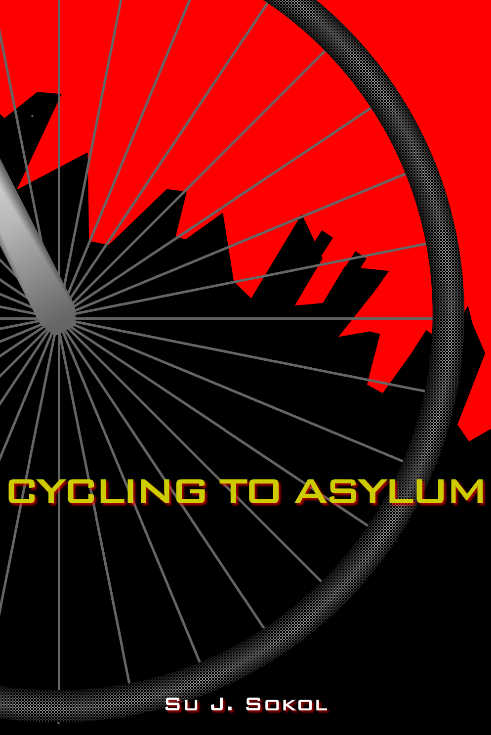 Su J. Sokol’s Cycling to Asylum is a book which argues both for and against the existence of borders.

What are borders, exactly? asks Laek, the book’s protagonist, a high school history teacher who, in a lesson on civil disobedience, tries to tell his students that borders aren’t real. Mere pages into the story—before the nature of the setting and plot are fully developed- the idea of borders is underscored in a conversation between Laek and another character (Erin, a friend):

“But borders exist,” she insists.

“Ever think about borders when you were a kid? I did—a lot. Maybe because of how much my mom and I had to move around. When we crossed into a new state, I’d stare at the road. Try to find the thick black line I saw on the map.”

Erin smiles but doesn’t say anything.

“Yeah, someone eventually explained that the lines on the map weren’t there in real life. Not between states and not between countries, either. It got me wondering. If borders are imaginary lines, why can’t people just step over them?”

And the book attempts to answer just that: what is the mechanism that keeps borders in place—those invisible lines that mark landscape, bodies and even, ideas?

Laek and his family (his wife, Janie; daughter, Siri and son, Simon) live in a world of disconnection and surveillance, a la Orwell with iPhones (or, “screens” as they’re called) in a futuristic Brooklyn that resembles our own contemporary city of the same name  just enough to be slightly scary. Here, the city is composed of borders, premised on what is and what is not, and the city, in turn, struggles to define its citizens through a hyper-vigilance that borders on mania.

Laek, in the first chapter, is halted by a cop for supposedly not stopping his bike for a stop sign on the way home from a political rally. The expected fear of such an encounter leads the reader into the revelation that Laek is not only a high school teacher; there is something in his past and political leanings which suggest he’s hiding who he really is. So much so that the encounter leads to a violent rape in which the character loses himself in the labyrinth of his mind and the reader begins to understand that, for Laek, there is one big border he must cross: from a hidden existence into something like a normal life.

Sokol’s hints aren’t subtle: there’s lots of violence in the chapters narrated by Laek. Rape and beatings, broken ribs, PTSD, depression. His complete history—a detailed account of torture which came about from joining a sort of political underground movement as a fifteen year old—is not revealed until late in the book—but is suggested through the eyes of the other characters: Janie, Siri and Simon.

The children especially (Siri, twelve and at the threshold of young adulthood; Simon, nine, whose spare yet naively open observations are deeply profound) serve to reveal more than they are capable of understanding and also act as the foil to Laek and Janie’s adult understanding of borders: the absolute need for the national border between the United States and Quebec, where the family flees for political asylum in order to save Laek’s life.

But it is also the children who resolve the problem with borders, or who articulate, the most clearly, how something can be both real and imaginary. Siri is felt up by another boy at school who is also her friend. She’s confused about this, of course, but is not offered the opportunity to confront the boy herself. Instead, Laek intervenes and “forbids” her from seeing him again. But Siri asks: “You don’t want to give up on the world, even though it’s filled with evil. But there’s way more evil in the world than there is in Gabriel. So why do you think I should give up on him, when there’s so much good in him too?”

A small moment, perhaps; but that’s what shines about the Brooklyn-born Sokol’s debut novel. Despite the “big” fears and the dark past, small moments carry the book’s larger message about the importance of community, of connection—of breaking borders. And it’s these small moments that validate Laek’s thoughts that:

“…getting an outside view on your society can be useful. And being useful has given me a great deal of satisfaction. Seeing how our struggles, our successes, and our momentum can pass from one community to another has lifted my heart. They can spy on us. Jam our communications. Arrest and punish us. They can try to divide and isolate us. But they just can’t keep us apart. Our solidarity and love slip right across their borders. Like those lines aren’t even real.”

Cycling to Asylum is as much about freedom as it is about how that freedom is found. In the case of this book, it’s found on a bicycle and it’s found in the hard-fought moments of a physical and emotional journey. Written with honesty, aching precision and tons of heart, Cycling To Asylum serves as a reminder that borders can become dangerous, but only if we let them. It also stresses that we should be singing a song of hope for a world that still has bicycles in it, because—to borrow from the book’s epithet by H.G. Wells: “When I see an adult on a bicycle, I do not despair for the future of the human race.”