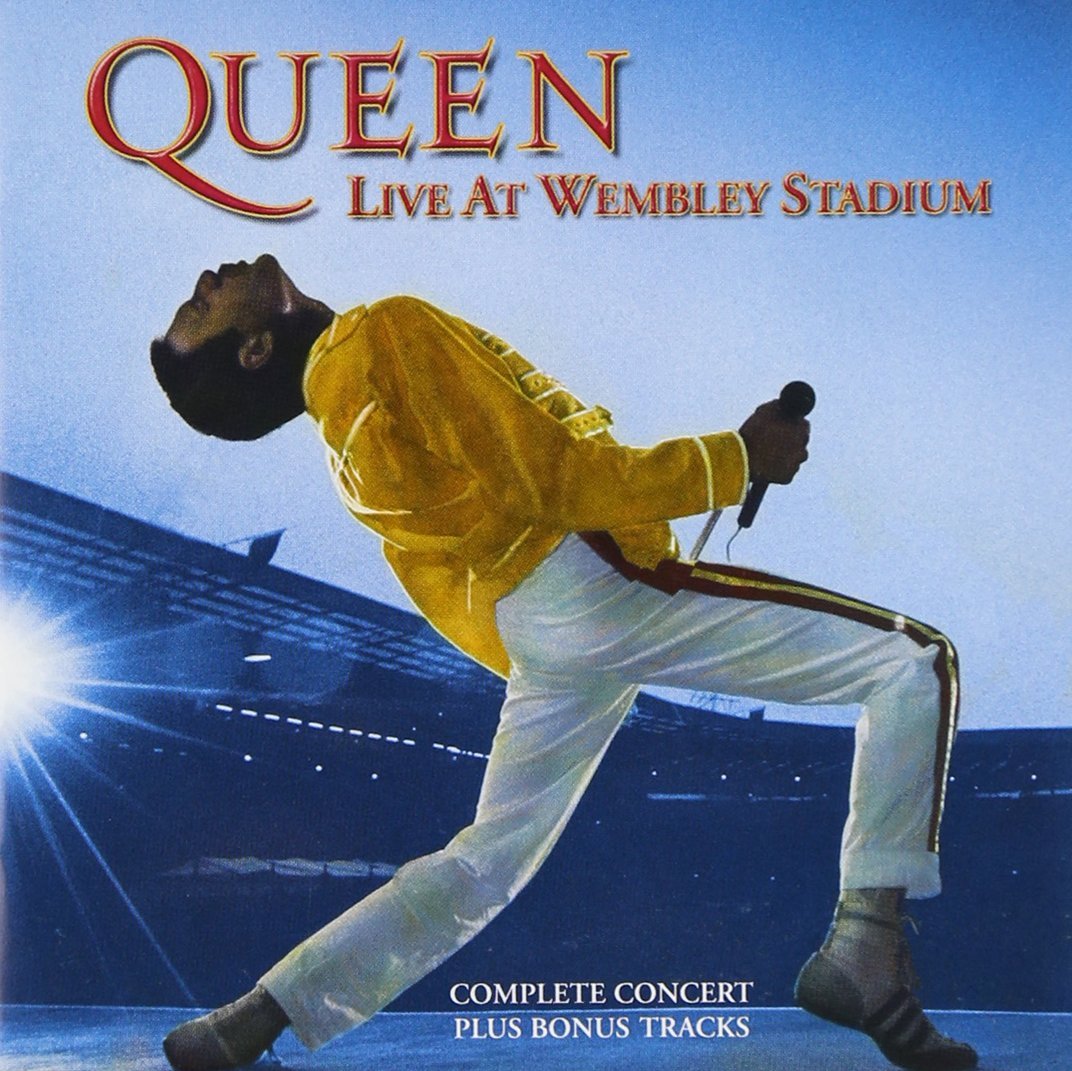 Brilliant and balanced, Freddie Mercury took up ballet with the same exuberant particularity with which he lived every aspect of his life, from choosing the perfect white ballet shoes before a performance, to deciding which piano notes would go best with his four-octave voice, to learning how to move on stage to avoid Queen bandmate Brian May’s guitar cord, to giving the whole of himself to every member of the audience.

It’s wrong to classify him as any thing because all the classifications that have been thrown his way are way too easy to make  – they’re a way to pin down, contain, and label the unclassifiable.

We all know the surface-level stuff about Freddie. But do you know how the black nail polish, two extra teeth, subsequent overbite, white painter’s suit, black moustache, short black hair, long black hair, twirls and pirouettes, epaulettes, crowns, jerk-off microphone stands, red robes, superhero t-shirts, leather jackets, dark complexion, the greatest voice in the history of rock and roll, and all the rest of it relate to his ontology? The being of a guy who knew that human nature is the very stuff of change, so that he renamed himself after the Roman messenger god and came burning through the cloudy English skies and all that Dickensian fog and pollution, all the way from African and Asian lands that you probably haven’t paused even to locate on a map?

But, as Foucault teaches, we need classificatory systems to give us knowledge as power. In other words, power and knowledge are really the same thing, so that’s why we have to label Freddie. We want to feel power over a man who embodied the very notion of mobility and change. Freddie constantly moved on stage, constantly moved in life – he was the water of which Heraclitus spoke when he said we can’t step in the same river twice.

And that’s probably why many of us think of him as either a “gay buffoon” or one of the greatest “frontmen” in rock history. We tend to think of water as being “choppy” or “calm” – it never just flows. It must – like Freddie – be one thing or another thing. It just can’t be.

So for those in the gay buffoon camp, Freddie’s the most effeminate lead singer in rock history (Bowie and Elton don’t hold a candle in the wind to him; they aren’t quite the space oddities that he was). After all, Freddie was a campy prat, a hedonist and sexual deviant who, somehow, deserved the death that he got. He deserved to be punished for all those nights at the Anvil and other NYC gay clubs, where he “did everything with everybody” and reveled, a roaring queen, brilliant in her largesse but doomed to a guillotine. He was exactly like the “Killer Queen” about which he sang on Sheer Heart Attack, way back in 1974, before anyone had heard of AIDS. He was just another glam rocker who pranced around London with the same panache of Bowie, Elton, Hunter, Bolan, Ferry, and Eno – take your pick.

Did those in the gay buffoon camp ever truly think about Freddie’s being? Or did they forget it the day the tabloids stopped their surveillance of Freddie’s house as soon as his rake-thin corpse had been removed through some secret exit?

To others, Freddie’s one of the greatest frontmen in the history of rock and roll. He was a cracked actor, the only man alive who could seemingly will entire crowds of thousands to move as one and sing with him, as he did at Live Aid in 1985. It didn’t matter whether the song was one of his own (“Bohemian Rhapsody”) or one of Brian’s (“Hammer to Fall”), he dominated Live Aid to such an extent that everybody who saw the concert remembers the constantly dancing man sporting a black moustache, a white muscle t-shirt, blue jeans, and a black spiked arm band. Who remembers what Robert Plant and the other longhaired cock rockers looked like on that day? Do they even remember that Led Zeppelin “reunited” for the performance?

But all of us tend not to think of Freddie as Farrokh Bulsara, native of Zanzibar. We don’t know that Zanzibar was a British colony in East Africa and, upon gaining independence, became known as Tanzania.

We don’t know that Farrokh grew up in the conservative Zoroastrian faith, which, in one of its greatest contradictions, tells its adherents that the soul’s duty was to soak up all earthly experiences, and – as Farrokh would sing in 1979 – have “a good time” but also said that these experiences couldn’t be homosexual in nature. We don’t know that, from his earliest years, Farrokh was thus confused, thrown back on himself in utter and awful wonder that the world could offer so much beauty but not the beauty of the caresses of male hands, the touch of male lips, and the nakedness of the male form.

When Farrokh hit St. Peter’s boarding school in Panchgani, India, he felt his inner Elvis burning inside him, his outer Little Richard pounding the keys, whenever The Hectics took the stage and the shy kid from Zanzibar discovered his future legend and an extroversion that only appeared when he was in the presence of rock and roll.

On stage, Freddie, as he now styled himself, realized the erotic possibilities of performance, how these possibilities could lead to a politics of personal liberation: sexual liberation, artistic liberation, liberation. His legend, he knew somewhere in a place where no words or labels could travel, would derive from his ability to give others – people in the audience at St. Peter’s but also at a hundred tiny English clubs, at Wembley Stadium, and at Madison Square Garden – the feeling that they couldn’t be stopped, be confined by the likes of the very labels that would one day be attached to himself. He wanted others to have the confidence that he had to break free and re-create himself as an Other.

And so Freddie chose to become a god, not Zeus, Zoroaster, Jehovah, Krishna, or Jesus, but a lesser god, a messenger who could visit you personally when his rangy voice and glittery image entered your body through, really, all five of your sensual inlets. Mercury didn’t speak the Dionysian message that you already knew from Plant and Jagger, Pop and Morrison, but a more complex, multitudinous, and even contradictory communication. Mercury spun on a stage, maybe a white-and-black blur in the distance, and longed on record for somebody to love, and we understood that our brains and very senses of self were unstable and forever changing, just like a speedy god whose fiery heels carried the news of the world to us all.

But, however he stylized himself, Freddie couldn’t keep the pain out of his music – and I posit that the real message of Freddie’s music isn’t one of hedonism. Sure, he wrote songs like “Can’t Stop Me Now,” “We Are the Champions,” and “Get Down, Make Love.” But it was drummer Roger Taylor who wrote “I’m in Love with My Car” and Brian who wrote “We Will Rock You.”

Freddie sat down at his piano when he was still well and came up with tunes like “Bohemian Rhapsody,” “Love of My Life,” and “Somebody to Love.” A true Virgo, Freddie wanted more than anything for people to understand him. And, more than anything, he longed for intimate moments with a person with whom he could share everything. Even when “Bohemian Rhapsody” is at its most bombastic, Freddie’s heart cries out for understanding and love.

And the most important event of Freddie’s life is that right around the time he’d received his death sentence, a miracle occurred in the life of the self-styled god (it’s no accident that the title of the penultimate album that Queen released during Freddie’s lifetime is The Miracle

Life became a miracle for Freddie in his existential twilight – and songs like “A Winter’s Tale” show how much he loved the world, even though he wrote its lyrics from his deathbed. Love, no matter who tells you otherwise, is the ultimate agent of transformation, the ultimate miracle.

Love, Freddie knew, finds us when we least expect us; when we’re facing the emotional devastation of our own bodily demise, we can ascend to a higher place. In the case of Freddie, we can make it to the recording studio – with the help of those who love us – to sing the couple of vocal lines that our decaying bodies will allow us to sing, so that Brian, Roger, and John can make Made in Heaven after we’re gone.

Freddie’s existence proves as fact Lennon’s idea that “love is the answer,” as well as Queen’s idea that we’re all made in Heaven. But, as David Byrne has taught us, “Heaven is a place where nothing ever happens.” In other words, Heaven as a physical realm, as a bar where we get to hang out with all our dead friends, family members, and dudes like Jesus, is fiction.

What’s true is Freddie’s greatest lesson: that we invent Heaven whenever we offer ourselves up to change and take the risk of faith, of stepping up to the studio mic and singing a line or two that will inspire our friends and millions of people we’ll never meet after we’re gone.

Everything depends on all of us finding the courage to sing our own line or two in the face of the death that awaits us all. We’re all Mercury, burning through the gray skies of the lives of others to deliver the message of love. We’re all Freddie.