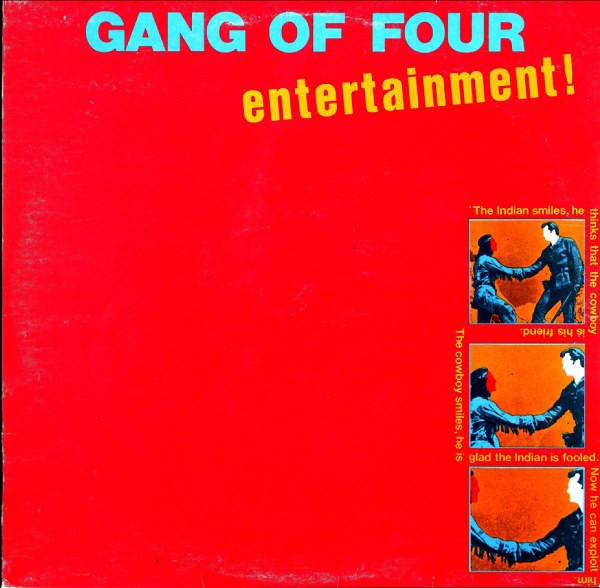 Today SEM begins the third day of its week-long celebration of the 35th anniversary of Gang of Four’s seminal Entertainment! LP, which came out in 1979.

Founding-member Dave Allen played bass on the record – to say the least. It’s better to say that Allen’s funky and buoyant playing drew listeners into each and every song on the record, making them accessible and compelling. Who would have thought to combine funk and punk? Allen and Gang of Four – that’s who.

In an era of bass mastery – think: Peter Hook of Joy Division, Graham Lewis of Wire, JJ Burnel of The Stranglers, Paul Simonon of The Clash, Simon Gallup of The Cure, and Barry Adamson of Magazine, to name just a few – Allen’s playing stuck out for its utter originality and rhythmic complexity.

SEM was honored to chat with Allen about Entertainment!.

SEM: What was the impact of Entertainment! when it was first released in 1979?

DA: It was released to great critical acclaim. The amount of positive press reviews that it garnered was incredible.

SEM: Can there be another record made today with a similar impact?

DA: I’m not sure. I have discussed a similar question with Rick Moody. I think he asked me in an interview, “Was it because you made that record in that time?” He meant a time in history that influenced the making of Entertainment!. And I asked him, “Does it make a difference whether it was ‘at’ that time or ‘in’ that time?” Certainly, what was going on in popular culture outside the studio doors may have made an impression upon us, but I’m not so sure that it affected our work directly. I think music critics and music fans were tiring of the punk rock movement, and we provided a provocative, intellectual work of art that blindsided them. It’s not hyperbole to suggest that we also created a shift in the way music was performed and crafted.

SEM: Considering the saturating presence of digital technology, how different do you think the album would be if you made it today?

DA: I have no use for nostalgia. We will never know.

SEM: As Simon Reynolds succinctly put it in Rip It Up and Start Again, G4’s sound offers “Radical form, radical content; yet you could dance to it.” To what extent was this conscious or did the signature G4 style emerge organically as an inevitable by-product of the four individuals involved?

DA: The four of us in a rehearsal room deconstructing rock music was a joy for me. If you dig deep, you’ll find influences everywhere, from Wilko Johnson in Andy’s guitar work, repetitive drum patterns that could have been crafted by Can – or, as Hugo has put it, as simply as Charlie Watts – and bass lines inspired by dub reggae and Bootsy Collins. If you listen to Solid Gold, our second album, you’ll find us easing further into funky rhythms. One of my favorite tracks is “Capital (It Fails Us Now),” which was an EP-only release, I believe. We could coin a new term for the ferocity yet danceability of that song – maybe “postmodern funk rock” to be pompous…

The short answer is, yes, we consciously created a unique sound that was reinforced in the studio by not using reverb, as Reynolds correctly points out.

SEM: Kevin Dettmar – in his 33 1/3 on Entertainment! – describes G4’s engagement with Marxist philosophy and French post-structuralism. And, of course, G4 have a song on Solid Gold – the follow-up to Entertainment! – called “Why Theory?” Which specific philosophers and texts influence the radical politics of Entertainment!?

DA: Pass. These days I’m really interested in cognitive dissonance and the human condition. My ideas are being fueled by extensively reading John N. Gray and other, similar philosophers, and by reading the poets John Ashbery and Wallace Stevens. Gray, Ashbery, and Stevens remind us that we can’t control our fate as humans and that we don’t live our lives as one person; we shift who we are continuously. I’m currently in the middle of an essay about this anti-humanist stance. I scratched the surface of it when I shared one recently on the Beats Music blog. It has the subtitle “We all have opinions, where do they come from?”

SEM: G4 on EMI. Some folks took umbrage, as it appeared there was a contradiction between the band’s content/intent and deciding to sign to a major. Were there any qualms within the group or was it pretty much a unanimous decision?

DA: It was a unanimous decision to sign to both EMI and Warner Brothers Records. The recording industry machine doesn’t treat you well, but it has the advantage, or rather did have the advantage, of promotion and distribution. Today of course the greatest opportunity to musicians is at their fingertips – the Internet.

As for folks taking umbrage, it’s because they feel they “own you” as a band and can persuade you to do “the right thing.” It’s a myth. They are not there making the tough decisions. They should be happy they weren’t, by the way.

SEM: Did any subsequent regrets ever arise?

DA: I can’t speak for my bandmates, but I have no regrets. It reminds me of the David Bowie lyric from “Ashes to Ashes” – “I’ve never done anything out of the blue.” I can live with that.

SEM: Since signing to EMI was part of the band’s strategy of infiltration, how on earth would they go about that today?

DA: I could expound at length here about the opportunities the Internet brings today. Let me just say that now we could allow our fans to gain access to our music easily and conveniently via mobile devices wherever they may be in the world, reducing the friction and the power of the gatekeepers in radio and television that held Gang of Four back in the early days. The future of music is joined at the hip with the streaming music services, which is why I joined Beats Music – to create change that benefits musicians, labels, and music fans alike. There’s no going back.

SEM: Are you still happy with the way Entertainment! sounds, now that 35 years have passed?

DA: I wouldn’t have changed a thing.

DA: That’s a difficult question to answer as it is speculative. I could ask of you – how would we ever know? I’ll share some of the interview I did with Rick Moody, as he asked a similar question, and my response is here:

“So let me get back to your idea of us hav­ing a ‘sense of mak­ing art in an impor­tant time.’ That state­ment feels clichéd to me, or maybe I’m per­son­ally uncom­fort­able with it as too high­brow. Were we ‘in’ an impor­tant time in British soci­ety and cul­ture, or did Gang of Four form ‘at’ an impor­tant time? I think there’s a dis­tinc­tion. We shouldn’t for­get that punk music was a move­ment amongst the art rock set in Man­hat­tan before the punk sven­gali Mal­colm McLaren imported it to Britain’s shores in the form of the Sex Pis­tols. Arguably David Byrne and Talk­ing Heads or Patti Smith and Richard Hell were work­ing against a dif­fer­ent cul­ture than the one that per­me­ated Britain at the time.”

“What if we’d deliv­ered Enter­tain­ment! in this last decade while the world econ­omy was bub­bling and froth­ing, with most Amer­i­cans ignor­ing two major wars while treat­ing their ‘homes’ as ‘assets’ and strip­ping them of equity so they could con­tinue to indulge them­selves in an ever more lux­u­ri­ous lifestyle?

How then would we be received?

Well, given that not one major rock band – as far as I know – has raged angrily and openly about where we were and where we are head­ing as a soci­ety today, is both sad and fas­ci­nat­ing to me. If we dropped Enter­tain­ment! today I’d say it would have as much impact, if not more, than 1978.”

Check out our interview with Gang of Four drummer Hugo Burnham here.

Check out our interview with Kevin Dettmar, the author of Gang of Four’s Entertainment!, here.

Check out our 35th anniversary edition review of Entertainment! here