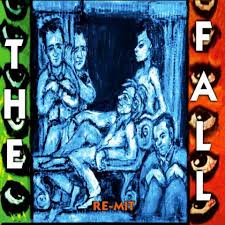 “Kiddies, as we get older, we have to try and understand people who are different from us” bleats Mark E Smith on the otherwise inscrutable “Noise” off the new Fall album Re-Mit. The fact that this line is uttered inside a flow of Smithian indecipherability – the next two lines are “pizza is one of these people/in his hands is a guitar, why don’t you try some of it yourself?” – is immaterial in the grander scope of things. As long-standing Fall fans, we all have our favorite lines – “the only thing real is waking up and rubbing your eyes” from “How I Wrote Elastic Man” is among mine – but they’re often wrapped up inside enigmas of language whose primary fascination is the ability to be both rambling and acidically concise in the same moment. So we take our withering or whimsical bon mots as we can get them and attach to them an intuited amount of tongue-in-cheek(i)ness or perceived profundity depending on the lyric, depending on our mood. What we seldom if ever attach to it is sincerity, no matter how much we yearn for it. We’ve been warned against it from the start by the tone and timbre of the man’s voice alone, a warning that has only deepened as that voice has taken on the cigarettes- and cider-afflicted growl and bark of a laryngeal seal. Yet the fact is we still yearn for it. The guy’s an institution by now, an icon of survival if ever there’s been one, churning out, with a legion of bandmates (mostly) past and present now numbering somewhere beyond the sixty mark, a reliable tumble of recordings as if by yearly subscription. By simple accretion if nothing else he’s looked to for some nuggets of wisdom however elliptical or opaque they may be. But as oracles go, of course, he’s not exactly exemplary and, well, we’ve always loved him for that. Willful is his default, and if you don’t find the anti-charm of that charming, you almost certainly hate the Fall.

But all this sidesteps discussion of the other inimitable ingredient in the cracked and jagged mystique of this singular band, that famous Fall sound. So cultishly notorious are their various audio trademarks that Smith went so far as to reflexively name a track on 2007’s Reformation Post T.L.C. album “Fall Sound.” Generally lurching about in a northern British working class version of the Beefheartian template, under-girded by the sturdy post-punk anchors of prowling basslines and primarily angular, and/or terse, and/or fierce and chopping guitars, there are also the occasional dashes into the ersatz, shadowy fringes of the Can compound, none of which explains the not infrequent pop nous on display – some of the sharpest hooks that have ever grabbed me have come from inside Fall songs – nor the rumbling beauty of, say, “L.A.” John  Peel’s famous quote (“They are always different, they are always the same”) is not just a spot-on observation, the astuteness of their greatest champion, it’s also axiomatically correct, pointing at the non-formulaic formula that has sustained them through a non-career career that is now perilously close to spanning forty years. And though he’s not a musician in the strictest sense, there is little doubt and considerable proof that Smith’s garrulous wordsmith’s hand leans heavily on the structural tiller.

Regardless, the fact remains that, at times, listening to the Fall can test the staunchest of mettles. Frequently enough to merit mention, it must be understood that an essential part of being a Fall fan is enduring those (comparatively rare) moments when Smith’s scalliwag willfulness takes the controls as if he’s possessed by a bratty seven year old. Though it can forcefully be argued that genius resides in “Iceland,” “Printhead,” or “Dresden Dolls,” extracting it can sometimes rank akin to yanking out a molar with pliers. Whether barking at you with a Blurtian blat or simply avoiding the bothersome nicety of ‘a tune’ altogether, there are instances when only the hardiest charter member among us can resist the skip button. It’s then we remind ourselves that no artist or band that succeeds in retaining our attention for this long, continues to be that most unhelpful of descriptors ‘interesting,’ has done so without being both driven and adventurous, driven to be adventurous. When the choice presents to call them missteps or detours, we opt for the latter and return to our unabashed fandom.

With all this in mind, let’s consider Re-Mit. Everything heretofore alluded to is dutifully present, often, no surprise, in the same track. There’s an over-reliance on the so-called experimental – especially incidental snatches of dialogue – that brings with it accusations of patchiness as has been the theme in a fair number of reviews and might have been in this one had I not gone past first impressions and plowed ahead into the fifth and sixth. Whereas it is true that a bit more ‘detouring’ occurs on this record than I’d like – the aforementioned “Noise,” the slightly wibbly “Jam Song” (candidate for dullest name of a Fall song ever) – it’s also true that on just a few repeated listenings a significant percentage of tracks have been shifted from the ‘extraneous’ to ‘essential’ side of the ledger and it seems a decent bet that those just cited will also, eventually, find their way into my Fall-besotted heart.

Meanwhile, there’s a healthy clutch of tracks on Re-Mit that deserve an undisputed place in the band’s storied playlist. “Sir William Wray,” after the teasingly brief instrumental “No Respects (intro)” opens proceedings in full throttle, is an immediate wind-blast of synthed-up organ leading to the hurtling pound of an unsparing rhythm section, the racing flurry of Smith’s ululations and a signature guitar figure that the band, as a brand, should really have copyrighted. The track harkens, in its gnashing energy, its tightly-etched serrations, to the early hungry years and I beg of you to think: how many artists can that genuinely, rather than gratuitously, be said about? At most turns on this record the momentum barrels into you, sometimes Mack truck-style – the intro-resurrected “No Respects, Rev,” the James Murphy-baiting “Irish” with its Jaco-on-speed bass and city swamp guitar – sometimes with more nuanced intentions, such as the finely-wrought, history class mini-epic “Hittite Man,” the fineness of the guitar mimicking the clear delicate lines of a Grecian bas relief, or the double vocal-tracked “Jet Plane (“the Italians certainly like their Sundays”) that lollops along with multi-lingual backing and (!) clarinet before blooming pure Fall-stylee-like into a full-blown prototypical track that could have originated almost anywhere along the long and convoluted timeline that constitutes this band’s history.

And that’s the thing about the Fall. They’re timeless, no matter how much their singer ages. Album closer “Loadstones” is another track that could land pretty much anywhere in the Fall catalog – though again it’s got a circa ’79 feel – just as nearly as any of their vintage tracks, bar, perhaps, ones from This Nation’s Saving Grace, a masterpiece all its own and of its time, could jump forward into the next album in 2014.

Re-Mit is not a perfect record, but as a record of a band, a brand, that has been banging out reputable albums since time immemorial, it’s a fucking miracle. You cannot judge this band outside the context of their existence. It would be heartless to do so. And though Mark E Smith himself is likely impervious, it’s nonetheless a fact that, faults aside – I could do with never again hearing the asphyxiated warble that inhabits the first few bars of “Victrola Time” before the vocal regains its listenable footing – once all’s said and reacted to, no one comes within a Manchester mile of approaching what this man, this band, has accomplished and continues to accomplish. They make their own rules, their own sounds, and seem set to keep doing so at an uneclipsable rate until the man at the helm gives up, and he ain’t the giving up type. What band, what artist, pray tell, compares?