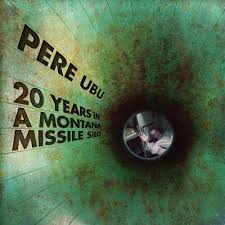 Rather like a month of Sundays if by ‘Sundays’ we mean albums that missed the parry of SEM’s editorial pen, as senior editor I plan on treating this first month of the new year as if it’s 2017’s lost 13th month, playing as much catch-up as I possibly can. I’ll still fall short, of course – it’s not as though I’m known as ‘Lightnin’ Dave around here – but it’s the spirit of the effort that counts, I believe, and besides, as it’s going to happen again – and quickly – I feel I may as well give myself a headstart on falling behind in 2018. I just feels right. All that said, few albums not caught up to in the previous year could be more deserving than the one covered below. If it’s OK, I’d actually like to add this record to my now-top 11 of 2017. Least I can do.

Irascible. Inscrutable, Inimitable. Turns out a number of substantive i-fronted adjectives can be applied to David Thomas and the band he’s been singing out front of since time began (1976 was year zero, after all). Hastily we must add to that ‘intelligent’ and, in a fit of immensely irrational wishful thinking, ‘invincible,’ the former for reasons anyone reading this knows so well as to render explanation unnecessary, the latter because 20 Years in a Montana Missile Silo, Pere Ubu’s give-or-take 25th studio album since Dub Housing flailed into furious life in 1978, is as good as anything I’ve heard them do. Now, though it makes the declaration no less honest, there’s nonetheless this caveat: I’ve not here every one of those albums. But I have heard a healthy majority of them and can state with no hesitation that not only is the above statement true but so is the fact that the very same pronouncement could be made about almost every other title in the band’s impressive body of work and thus, for the sake of humanity, I’d rather hope that their run shall never end.

While, again, skirting with a ginger but steadfast defiance any too-easy references to Captain Beefheart, and, again, making it clear that ‘Mark E Smith possessed by the spirit of a white Ohio-raised Howlin’ Wolf’ is as close as any sane person should allow “American Fall” comparisons, the work on 20 Years rips as it should rip, snorts where it should snort, and overall rocks its deft, behemoth-like Pere Ubian grooves like no one’s rock’n’roll business, lurching impeccably with no perceivable loss of vitality. Just as notably, the record is full as ever of Thomas’ tricky verbal irreverence, though – a tad inevitably, perhaps – it’s mixed  at times with Beckett-like sighs of mortal transience (see “The Healer,” attended by poignant steel guitar from ex-Swan Kristol Hahn and the wistful calls of Darryl Boon’s clarinet.

Among the album’s whirl of highlights, serrated, headlong opener “Monkey Bizness” rattles along in a kind of punk-avant frenzy, Thomas’ vocal a-froth with guttural glee (and, as it happens here, at the 0:40 mark, the timbre of the line “sex clowns / bounce around” is very Van Vliet indeed, a gesture either winked at or mocked by bringing in Zappa’s brown shoes in the track’s final seconds), the brief, caroming advanced garage blues of “Swampland,” the singer’s dodgy contradictions rapier sharp and funny as fuck, “Plan from Frag 9″‘s proggy paranoia somehow claustrophobic and expansive in the same moment, “Howl”‘s creeping kingsnake noir, the blues as tortured sexual catharsis just like always. The record’s cake-taker, however, has to be the moody triptych it closes with.

With “Walking Again,” fraught with drones and a languid lurid pulse, Thomas’ voice set to stalker tremelo, “I Can Still See”‘s swampy maraud set against a fever bed of synths and effects, and the heartbreaking melancholia of “Cold Sweat,” an elegy of sorts to love, need, and despair that’s powerfully lovely enough to be declared 2017’s official coda, bringing an improbably strong record to a close, Pere Ubu, sans hyperbole, are, by virtue of 20 Years in a Montana Missile Silo, hereby drafted in to that rarefied group bound together beneath that ultimate i-fronted adjective, immortal (even if, per Groucho, one assumes the band would never accept an invitation to join a club that would them as a member). Parenthetical asides notwithstanding, this album is that good. [read more and buy 20 Years in a Montana Missile Silo here]