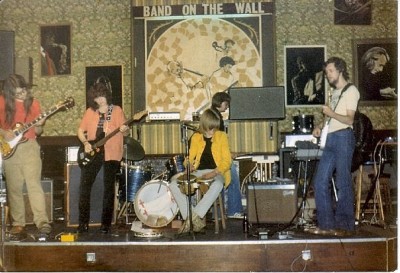 Isn’t it funny how things work out sometimes. Apart from being one of the most revered songs in the post-punk canon and possibly among the most recognizable tracks in all of rock music, “Love Will Tear Us Apart” is also the most profoundly poignant, the posthumously-released signature statement of a doomed, flawed front man that during his short life had somehow found a way to sing with grace and passion from the darkest depths of sorrow and regret. In death Ian Curtis has become a tragic icon, and no song is more responsible for that, nor more equated with the legacy of his suicide, than “Love Will Tear Us Apart.” There’s no need here for comment or description, the song is already playing in your head. It’s so well-known that it’s immediately obvious to just about everyone what song’s just come on from the first few notes, ranking in the ‘instant recognition’ category with “Hard Day’s Night” and “Jumping Jack Flash” and any other you’d care to mention. But what’s not so well-known is exactly how – and where, and from whom – the band got the basic blueprint for that central melody, the one the bass and keyboard play together, you know the one, the one that gives you goosebumps every time you hear it.

Thematically, sonically, aesthetically, “Love Will Tear Us Apart” has all the earmarks of a Joy Division song, and in a very real sense represents the purest distillation of the band’s entire catalog into a single track. But the fact is, the very progression at its center, that millions of people around the world could hum at the drop of a long overcoat, was borrowed (with permission) from a nearly unknown band.

The entire story evolves out of a kind of musical self-help group called the Manchester Musicians’ Collective (MMC; formed in 1977) and into the early, quintessentially Manchester D-I-Y label Object Music (founded 1978), responsible for quirky, personable recordings by the likes of Spherical Objects, Grow Up, The Passage, Steve Miro, and a number of others including the band in question. That energy was one of the essential sparks that lit the collective spirit animating Manchester at the time and helped the city produce such a fertile multitude of bands and artists, creating albums and singles that have not only survived through the decades but have become iconic, the overall body of work from that city in that era still exerting incalculable influence today. In this collectivist atmosphere, banded together against the historic media dominance of London, groups had a tendency to be more supportive of each other than they might have been in the capital, trying to help each other get off the ground, suggesting musicians if a developing band was in need, sharing what they knew about how the game worked. They also, as often as not, shared rehearsal space, and it was in such a space that our story takes shape.

Guitarist Frank Ewart and bassist Louise Alderman were founder members of a modest little band called Manchester Mekon (no relation to the Mekons; The Mekon was a common comic book reference in the UK). Ewart, to quote Cath Carroll “was a key facilitator for many of the Object bands and members of the (MMC) collective…(a) slightly shuffling hippy peering out from a drapery of long brown hair, clad in a much-worn pair of old man’s slacks. Always willing to lend gear, fiddle with the PA and fix leads.” In short, a true believer in the communal ethos, so it’s little surprise that Manchester Mekon lived in a shared flat on Burton Road, the attic of which (again quoting Carroll) “hosted scores of rehearsals and recordings.” And it may very well have been there that Joy Division heard an Ewart piece called “The Cake Shop Device,” written and recorded in 1977 and featuring Chris Griffin on flute (the player responsible for the Doors-y keyboard part, unfortunately, is seemingly lost in the dry ice of time). One imagines the conversation. “Hey Frank, we like that guitar bit, is it OK if we borrow it and adapt it?” “Yeah, sure, mate, what’s mine is yours.”

The rest – and this has never been more appropriate to say – is history.

We leave you with both the ‘original’ and the ‘adaptation.’ (and a huge Stereo Embers note of gratitude to James Nice and his wonderful liner notes for the 2008 LTM release Auteur Labels, Object Music 1978-1981,the entire text of which, helpfully enough, can be found here, the same place you can purchase this crucial document of post-punk’s formative years)