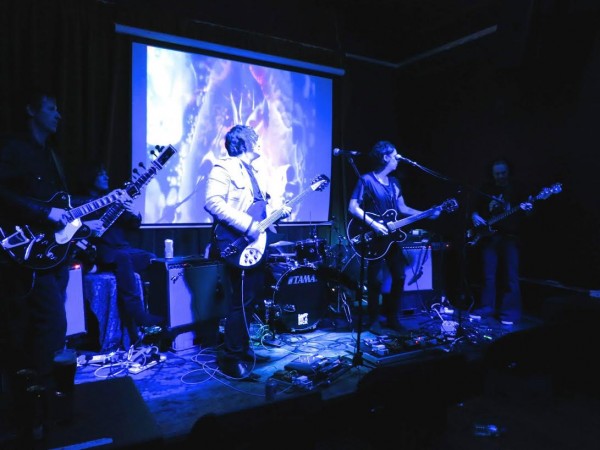 The East Kilbride, Scotland-based band, Helicon, are back with a new EP, Gehenna, a menacing hail storm of dark, psychedelic noise.

Brothers and Helicon leaders, John-Paul and Gary Hughes, formed Helicon in 2011, and since then, have forged a five-piece band that insists on capturing the vitality of the moment of creation on their records. They do just this on Gehenna – and on their numerous other records – by adopting a “first thought, best thought” mentality in the studio, which invites you inside the imaginations of the musicians, making you feel that you’re a powerful force in making their music along with them.

And what does this music sound like? JP, Gary, and the rest of Helicon’s sound world is one of dark drones and relentless noise. It’s ambitious, gorgeous, intricately structured, and, especially with sitarist Graham Gordon in the band, wonderfully original. Perhaps the only word to describe it is Gehenna.

You can download a copy of Gehenna here and/or purchase a vinyl copy here.

But, before you do, please enjoy our interview with JP and Gary. It’s one of the funniest and most insightful interviews that we’ve had all year…

SEM: Thanks for chatting with me, JP and Gary. And thanks for Gehenna, your most recent EP. My first question has to do with Helicon’s current lineup. Who’s in the band and what instruments to they play?

JPH: Gary plays his pink oboe a lot. Too much in fact. One day it’ll fall apart. I’m particularly adept at blowing my own trumpet. 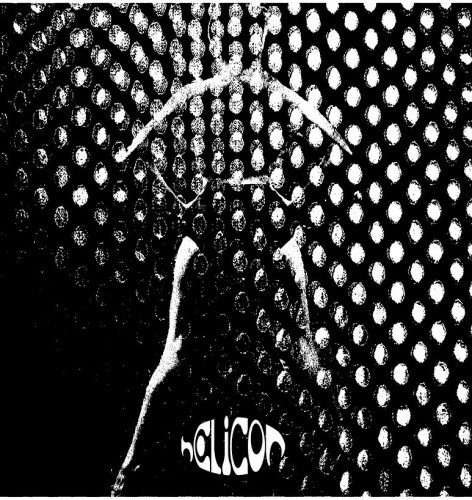 SEM: Why did you decide to add a sitar player to the band for last year’s Disturbance for the Disturbed and Gehenna?

JPH: I’d written the melody for “In a Sad Red Dusk” using a sitar pedal, and whilst it sounded OK, I knew it would find a whole new dimension if we used a real sitar. Fortunately, we knew Graham, the sitar player, from gigging together over the last few years and asked him to join us for the recording. We were so pleased with how it turned out that we’ve brought him out on the road with us to play live. As luck would have it, he too is a degenerate, drunken nincompoop, so he fits right in.

GH: We have known Graham for a good few years now, and we thought sitar would sit nicely in our latest recordings. He has become a big part of our sound, and hopefully, it will continue this way.

SEM: Since your Take the Ride EP in 2011, you’ve released nine EPs and one full-length, Suburban Decay (2013). What advantages do you see in releasing so much material over such a short time frame? I’m reminded of how often bands like The Beatles, The Beach Boys, The Stones etc. released their records in the 1960s…

GH: We just go into the studio and jam tunes. JP usually has the starting point, and we go from there. I can’t be bothered with taking a year or so to do one album. If it sounds good, get it recorded and let people hear it.

JPH: Yeah, like Gary says, we don’t really have the patience or inclination to wait around and spend time sweating the details. We record live, and I think that captures something fresh and exciting when the music is still so raw and un-polished. When we have an idea for a song we like, we just fucking get it written, get it recorded, and move on to the next one. I’m always excited about what we’re going to do next, not what we’ve just done. I love music as a performance art that captures a moment. It’s that moment I want to get on record. I don’t think you can capture that magic you feel in the moment when you spend three months trying to perfect a fucking snare sound. Get it done and get tae fuck. 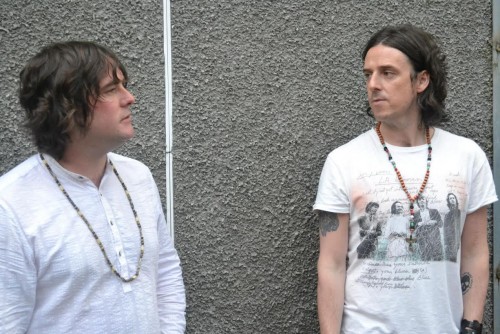 SEM: Why does the EP format appeal to you so much?

GH: I think it has to do with coming up with new songs, getting them right, and moving on to the next batch of songs. Always moving forward. Right, that’s that shit done. Next!

SEM: Let’s talk about the songs on Gehenna. On “In a Sad Red Dusk,” the sitar introduces a melody that, in combination with the rhythm section, provides drone-like bedrock for the song. How much of what’s on top of the drone is improvised? How much is “composed”?

JPH: Very little is composed. I’ll usually write the melody, and then we’ll rehearse a structure for a couple of weeks, improvising as we go. When it comes to record, we know when to start, when to stop, and how the main melody will go. The rest is made up as we go. We work well under pressure and in the moment. It seems to focus our minds and fire our creativity. We’ll just set ourselves a deadline and get it done. I don’t like to tell the other guys what or how to play their parts (unless what they’re playing is fucking shit…then Gary and I may start firing a few expletives at each other). I like everyone to come up with their part of the song. I hate the idea of dictating to the band exactly what I want. It’s a real collaborative effort like any good band should be.

GH: Like everything we have done so far, it is done live in the studio, and quite a bit of the last EP, Gehenna, was thought up on the day of recording as are many of our songs from the first EP we ever released.

SEM: The song also explores the quiet-loud dynamic by building to an astonishing and powerful crescendo. Please tell me about how you arranged the instrumental parts to achieve this build.

JPH: It’s a dynamic we use quite often, and it’s usually down to the fact we have so many instruments in the band. So it’s a nice way to allow space for each to breathe by building layer upon layer. I love that hypnotic build. I think the drumming also contributes to this, because Martin’s style can’t keep things quiet for very long. He starts out all gentle and tender like a considerate lover and before you know it he’s whipped himself up into a frenzy and is off on one trying to shove his drumsticks up your arse without your consent.

GH: I don’t really know; it’s just the way our songs have always been and the kind of music I have always enjoyed.

SEM: “Heavy Black Hole Jets” has vocals. What advantages do you see in keeping the vocals low in the mix?

GH: I hate nothing more than some guy singing over the top of really good music and nine times out of 10 ruining it.

JPH: Gary makes a fair point. I’ve lost count of the number of bands who start off with a really good tune and then someone shits all over it by singing badly. We always write the music first. If the song feels complete at that point, we don’t add any vocals. I hate the idea of adding vocals just for the sake of it, to make it more “radio-friendly” or to please someone else. If you’ve something worthwhile to say in a way that enhances your music, then fine. Say it. If not, shut the fuck up.

SEM: The cascading guitar feedback on “Jets,” in my estimation, carries the song. How was it created and arranged?

JPH: That’s what Graham calls the “psychedelic angels.” When the notes are played at that volume and bounce off each other, you start to hear different little harmonics and new notes being created by the sounds crashing and reverberating off each other. Pure blistering volume in Drop-D tuning. Laura’s beautifully simple synth playing helps that track a lot too.

GH: That song was very improvised; I had never heard JP play that riff he had in his head until we were ready to record it, and everyone just joined in with what felt right at the time.

SEM: Would you please discuss the relationship between the guitar playing and the drumming in the first part of “We’re Gaun Tae the Moon”? This part almost has a jazzy feel – which is very original in a track that has so much powerful noise…

GH: We have an amazing drummer, who comes up with stuff on the spot, and JP had the riff. It just kind of blossomed from there. Mark, who is our bass player, and Martin have a great understanding of each other, so if you can’t play over what they come up with, you should give up.

JPH: Yeah, we just let Martin do his thing on drums. He always wants to find a new way to play with our sound. A lot of “psychedelic” bands have very formulaic drumming. Martin has given us a drum sound and style unique to Helicon.

SEM: The second part of the song is, of course, much faster. How did this part come about?

JPH: I think it may have been two separate songs at one point that blended together during a jam. We wanted a big finale to our live shows and found it by combining the two for that cosmic crescendo to bring down the curtain… that, and we couldn’t be arsed writing another song for that side of the record, so we just jammed out a big bastard at 10-minutes long.

GH: We were in a different, smaller studio to record than usual. We just kicked it in to overdrive, with Gary Sharp adding his usual mad noises, and we did it in one take.

SEM: In this section, the noisy rhythm guitar is mixed – at least, to my ears – on the same level as the lead guitar. Why did you go in this direction?

JPH: I didn’t really want it to become a fret-wank-athon at the end. Long sprawling guitar solos can, albeit unintentionally, turn out a bit Guns N Roses, so we thought it best to just keep it down there in the mix. I like it that way because through good speakers or headphones, it forces you to delve in deeper and listen a little more intensely. When you do that you start to find all manner of new sounds and dynamics, which means you have something new to discover each time you listen. It also allows headroom for the sitar to come through.

GH: It just felt right at the time and when we listened back, we were pleasantly surprised at the outcome

SEM: What’s next for Helicon? A tour? Another record?

GH: Both, I think

JPH: Yeah, as long as it’s something new, creatively exciting, and challenging, we’re up for it. We’ve got a few new tunes ready to record any time now, so probably another EP as quickly as we can get in to the studio. As for the immediate future… we’re away for a pint. Cheers!