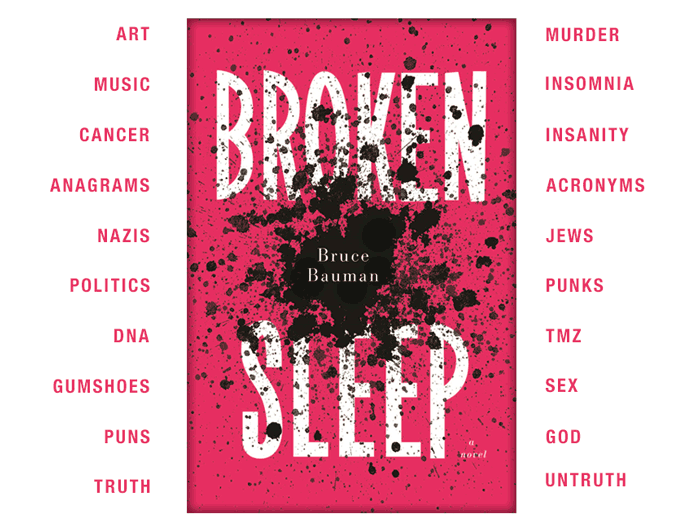 Oh, and the Nazis.

Let’s not forget the Nazis.

Aside from that, it’s also the only book in the history of literature to open with an assisted suicide presented as a public art installation with the Fugs as the house band.

I dare you to find another.

Falling somewhere between The Savage Detectives and The Fall’s This Nation’s Saving Grace, Broken Sleep is the kind of novel that begs to be reread multiple times. It’s teeming with cultural references, loaded with layers of history and covered in coats of staggeringly beautiful poeticism that will, quite simply, knock you out. It’s a dazzling masterwork—a commanding epic about memory, desire and all the music in between.

The book centers around the terminally ill Moses Teumre–afflicted with a rare and aggressive form of leukemia, he must find a bone donor or face certain death. The quickest medical solution for issues like these can be found in one’s own bloodline, but when Moses finds out that the family who he thinks is his family isn’t his family at all, he sets out to find out who just who exactly is.

The answer to that is unexpected and spectacular and it centers around an avant-garde artist and a famous rock band called The Insatiables.

And The Insatiables, it should be pointed out, are well named, because they’re very hard to resist.

Their tie to Moses is quickly revealed—the singer Alchemy is Moses’ half brother—and while Moses untangles the crossed cables of his filial life, the other cables of his existence that he thought were untangled, get very tangled indeed.

While Moses comes to terms with his ancestral past, other narratives–from Moses’ birth mother Salome Savant to Alchemy himself–weave in and out of the text with seamless grace. And as all the perspectives begin to fill in the empty, jagged slots of the whole puzzle, Bauman effectively uses these personages to traverse time and space, leaping from the ‘60s to World War II to political America in 2020, with painterly ease. As Moses searches and tries to part the seas of his past, Bauman walks up and down the streets of modern and forgotten America and as he does, he brings its history back to life.

As for The Insatiables, they’re something else. Aside from their own compelling and wildly entertaining narrative, their band dynamic is a reminder that once you’re in a band you’re always in a band even when the band is no longer a band. It’s a lifelong confederacy that makes the world possible in ways that civilians like us can never understand. But Bauman’s portrait of the musicians—which comes replete with a winning discography (who doesn’t wish the Noncommittal Nihilists For Nothing was an album you could buy right now?) is one of the most compelling, hilarious and altogether real depictions of a band that I’ve ever read.

Bauman has all the streetwise fluidity of a beat poet (“The bicentennial sissy boom-bah God Bless America blitzkrieg and the anti-rah-rah blather of the downtown scene made me almost want to be…French”), the comedic timing of George Carlin and the all-inclusive sensitivity of Walt Whitman. There’s no better guide in and out of the heavenly highs, hellish backwaters and purgatorial hangovers of modern America than Bauman—not only is he a writer of tremendous humanity and feeling, he reminds us that the fault line of a broken heart will always yield a series of aftershocks and without those shakes, we’re no longer alive.

Broken Sleep is a cultural stew, peppered with references to and appearances by: Springsteen, Rilke, Garbo, Sam Cooke, Van Morrison, Courtney Love, Dylan, Andy Warhol, Shakespeare, Mad Magazine, Yeats, Hendrix, Freud and James Baldwin. And somehow, Bauman brings them all together to show that together they’ve formed our modern consciousness, our national identity and our tethered and connected souls.

A colossal, unreasonably marvelous book, this novel is about life and how to live it as much as it is about how not to. Bauman is a modern master and his control, his pace and his compassion are things to marvel at. Broken Sleep is rich, hilarious and shot through with the kind of winning velocity whose aural equivalent is a pop song that comes with the kind of massive chorus that will bring you to your knees and make you feel like the world will never end.