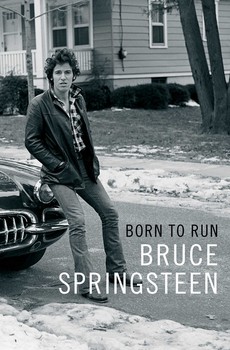 Bruce Springsteen’s songs live and breathe because of the way in which they give their listeners the opportunity to confront their own feelings about their country, family, friends, political beliefs, and, most importantly, themselves. In other words, these songs prompt introspection. The songs need that rare bond that Springsteen and the E Street Band have established with their audience in order to work.

As Springsteen reiterates in Born to Run (Simon & Schuster) – a book that I predict will go down not just as a classic rock memoir but as a classic of American literature – the stage is where it’s at on E Street; it’s the place where Springsteen and his band make what he terms “punk soul” music. And what does soul music do? It blends a variety of musical genres – gospel music, R&B, jazz, rock and roll, punk rock, and everything and anything – to get people to testify.

Testify: the word means “to give solemn attestation as to the truth of a matter.” Now, this isn’t to say that a Springsteen album or show is always a somber affair. Even LPs as earnest as The Rising – Springsteen’s post-9/11 meditation – feature tracks that make you glad to be alive: “Mary’s Place” and “Waitin’ on a Sunny Day,” in particular.

But Springsteen’s greatest ability – as Born to Run, never arrogantly or pompously, reminds us – is his tremendous gift for writing songs and giving performances that allow for what I’m going to call introspective testifying. Springsteen is an important American popular musician – perhaps the most important American popular musician of his generation – because his music provides a safe space in which his listeners have the freedom to go, as he says in another context in “Secret Garden,” “deep inside” and face their inner demons.

Inner demons? To the casual Springsteen fan – the fan that only has seen the extroverted three-hour performances and heard songs like “Born to Run,” “Glory Days,” and “Born in the U.S.A.” – these two words probably make no sense. For them, Springsteen is the heartland rocker, with a smile on his face and not a care in the world. He’s the good-looking and charismatic guy who’s there to entertain you. He’s even played the Super Bowl, had his butt photographed for an album cover, and danced with a young Courtney Cox in a cheesy 80s’ video.

But Born to Run reveals in its 500+ pages what those of us who have been listening to Springsteen for years and have thought long, hard, and deeply about his music have always known: Springsteen, in even his most joyous songs, invites you the listener to introspectively testify in almost every line of his songs.

Just listen to the lyrics of “Glory Days,” to take one very important example. Beneath the E Street Band’s joyous romp lies a sad tale of people on the cusp of middle age in the moment that they realize that their best years are behind them and that they’re trapped in a reality that they never saw themselves living when they were young and carefree.

“Glory Days,” as even a cursory listen or reading of the lyrics reveals, calls you to put yourselves in the position of Springsteen’s people, develop empathy for yourself and others, and – and this is the double-kicker – think about how the song can be both about Springsteen himself and about the downfall of the American dream.

That’s right. As “Glory Days” and almost all other Springsteen songs demonstrate, a darkness lurks just underneath the surface of the American dream and, perhaps surprisingly for those who don’t follow Springsteen closely, Springsteen himself.

On record, Springsteen begins to hint at this darkness on 1978’s Darkness on the Edge of Town, 1980’s The River, and 1982’s Nebraska. All classics, these LPs reveal an encroaching bleakness – and songs like “Factory,” “Racing in the Street,” “The River,” and “Mansion on the Hill,” among many others, reveal a willingness on Springsteen’s part to use his own melancholic past to compose.

But – and this is why his memoir is so important – these albums don’t directly reveal a key event in 1982, right around the time he was working on and releasing Nebraska, which hit him like a freight train, seemingly from out of nowhere. I won’t discuss what that event is (you’ll have to read Born to Run to learn about that), but what I will say is that it changed Springsteen’s life forever.

This event set Springsteen’s life and music on a new course, one that would lead to some of the richest material that he’s ever written. Let’s just say that Springsteen becomes aware in 1982, right around the time he was set to fire up the E Street Band for one final LP recording until 2002’s The Rising (Born in the U.S.A. in 1984 and the subsequent tour) that would not only make him into a superstar but cause him to question and come to terms with who he really was.

The gap between the superstar Springsteen of those years of mass popularity, when Reagan got the meaning of his songs wrong and he surrendered to the worst fashion trends of the 1980s, opened up a gap in Springsteen – the gap between the extroverted star and the quiet, unassuming, and rather introverted man who, truth be told, never felt that different from his audience members and felt deeply uncomfortable with the gap.

So Springsteen became even more courageous an artist than he already was. He released one of his best and often overlooked masterpiece albums, Tunnel of Love, in 1987, without the backing of the E Street Band. The album is extremely personal, dealing as it does with the heartache of his first marriage in the most lyrically naked terms imaginable.

Springsteen’s moment of introspective testimony brings him closer to his audience than ever. They, like him, suffer through marriages that don’t work out, self doubt, and those long nights that keep you up at night wondering what the future holds – wondering, as Springsteen writes repeatedly in Born to Run, if there is a future at all.

In other words, as Springsteen repeatedly admits and testifies throughout Born to Run, depression has been an acknowledged part of his life for over thirty years. The man whom it’s so easy to pigeonhole and stereotype as a rock god is just as vulnerable and suffers the same doubts and anxieties that we all do.

Springsteen is one of us – and Born to Run is a great spiritual autobiography in the tradition of Augustine, Melville, Joyce, and Kerouac (whose writing style he somewhat resembles).

Joining these four writers and others with the publication of Born to Run, Springsteen has written a conversion narrative, one in which introspective testimony is at the forefront.

Like Augustine surrendering himself to God, Ishmael’s realization of the authoritarian and self-destructive tendencies of Ahab’s quest to kill Moby-Dick (or, for Springsteen, his youthful, unbridled quest for rock and roll glory), Joyce’s conversion to the life of the artist, and Kerouac’s acceptance of his role in creating an American prose style that would deliver his spiritual autobiography and the biography of his country, Springsteen realizes that the only way to combat his depression (just listen to “This Depression,” on 2014’s Wrecking Ball) is to surrender himself to others: his wife and fellow E Streeter Patti Scialfa, his four children, and his parents, especially his father.

The second half of Springsteen’s life is really about the realization that his music is just an important part of a much larger life that includes the dual home bases of his family and, yes, his New Jersey home. This, of course, isn’t to limit the importance of music in expressing the stuff of his conversion. In fact, I surmise that Springsteen views his music as a way of inviting his listeners into his family.

In the end, we’re all members of E Street – and Born to Run is a reminder of that.

Ultimately, Springsteen – as his best music does, from 1975’s Born to Run LP to the Wrecking Ball LP – reiterates and now compactly states in Born to Run the book that through the arduous process of introspective testimony, perhaps a little therapy (Springsteen unabashedly remarks on his continuous battle with depression), and a solid home life, we can all come to terms with and successfully handle the demons that chase us.

Like his best music, Springsteen in Born to Run offers a message of hope. And, in these cynical and prejudicial times, what more can we ask for?