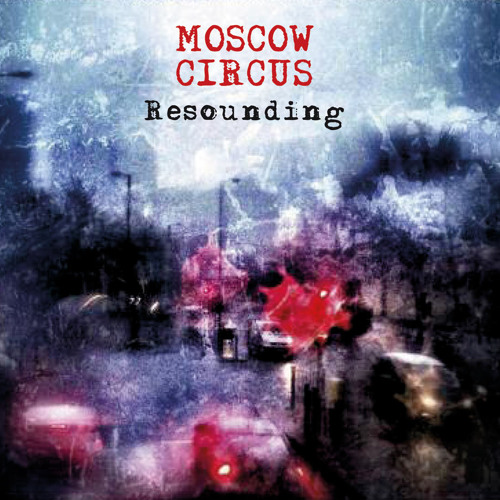 There are long gestational backstories – like the one behind the Distractions second album, or the Wild Swans‘ improbably long hiatus between LPs number two and three – and  then there are long gestational backstories. Moscow Circus’s debut release is one of the latter. Whereas both the Distractions and the Swans had those early albums to point to as proof of a promise that, however long they’d lain dormant, here at least was a band that once commanded some level of commercial – or, more accurately, editorial – attention that in turn merited our revivified curiosity lo these many years later, Moscow (by-way-of-Nottingham) Circus, due the usual stultifying array of reasons (skint, a talent for organizational disarray and an absence of ambition to match), have no such recorded history. No three column inches of 4-out-of-5 star singles reviews from the NME, no DIY compilation appearances, nuffin. The ultimate ‘band that time forgot,’ Resounding (sly title there, lads) is here to remedy all that, its ten tracks, all penned between 1987 and 1991, showing each in their own way how Fate maybe kind of fucked up this time.

Ignoring the druggy furore erupting around them in the UK at the time – there’s nary a raved-up baggy note to be found here – and instead preferring to meld influences drawn forward from the post-punk years (Chameleons, XTC, Echo & Teardrop, Talking Heads) with the then-contemporaneous, largely LA-based US indie explosion – the so-called Paisley Underground had staked its prominence and was spreading its psychy gospel everywhere at the time – Moscow Circus strike a chord on this record that’s resonant enough to not only arc across both those chosen eras but to land as well in the middle of 2016 as if it belonged here all along, which is no surprise, really, since that’s exactly what timeless pop is meant to do.

The plangent chime and quavering defiance of singer/guitarist Jonathan Beckett’s vocal on “Timebomb” indeed suggest no less than Steve Wynn and Paul Simpson somehow having been switched at birth, “Bleed For You,” with its knife-sharp jangle, is strong enough to be mistaken for a Jasmine Minks-era Creation single, the stripped-down popsike of “Snapshot” weaves with churn and charm and a slight edge of desperation as a couple of synths float above, one an icy echo, the other a lost extended theremin riff bouncing between clouds. A little later “Ex Genius” provides the album’s crunchiest spark, Pete Temperton’s bass as busy as Nick Lowe on adderall and our guitars again with a post-Big Star gleam, while “Coconut Shy” goes the coy pop route with a nice farfisa playground turn from keyboard guru Martin Haddelsey. It’s the close-out cut “Chances,” however, that should seal the deal with the pop-rock cognescenti hooked on hooks (read:all of us), built as it is on echoed epic drum heroics (Tom Parratt) that’s either patterned after this Positive Noise classic or borrowed from the rock’n’roll honor guard plus a metallic haunt of guitar atmospherics and the sepulchral fog of an organ line sweeping grandly underneath it all while Beckett intones what are essentially a string of circular, existential koans that, quite neatly, one might imagine Godot penning had he turned to writing songs during his legendary waiting game. Suffused with a sophic mist, it’s an appropriate note to end an album that, meant or not, represents a loose but unmistakable summing up of the creative life deferred. It’s also a cracking good tune, drifting nobly into the ether at 6:44 having lived its evocative life to the fullest.

There’s little doubt that this life offers us few second chances – that word again – to cross back over a bridge constructed of our own forestalled potential. Rarer still, presented with the opportunity, for any of us to pursue that transit once its path comes clear, to get that ticket stamped in the face of both the prospect’s innate challenges – there’s nothing easy about it – and life’s ongoing, inexorable stasis, the tumbling-to-nowhere momentum of which is so often far too comfortable to resist. Ahh, but to take that risk? Make that effort? That’s the stuff of dreams. For Moscow Circus – and by extension then all of us that hear it – Resounding is that ticket, resoundingly stamped. [Resounding available here]