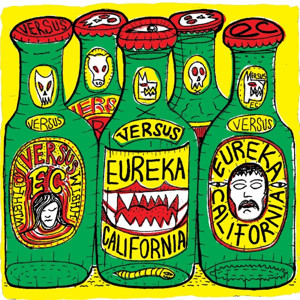 All punk bands – or bands with punk’s energy however else they’re categorized – have to grow up whether they want to or not. Resistance, no matter how vigorously applied, is futile. Now, I don’t know if they realize it or not, but the unstoppable force of nature that is Eureka California – Jake Ward and Marie A. Uhler, who are from nowhere near Eureka (Athens, GA, actually) and make a noise so uninhibitively boisterous that White Stripes could band back together, join up with the Black Keys and play devil’s tag with a 17-megaton A-bomb and still not come close – show signs of doing just that on third album Versus.

While no small responsibility for this evolutionary jump may primarily be due to recording in a real studio for the first time (Suburban Home in Leeds, UK, overseen by Hookworms’ MJ), I tend to reckon that the years of grinding and polishing their craft while simultaneously – through both touring and, yes, aging – becoming more (gasp!) worldly takes the raging lion’s share of credit. None of which is to say that the fuzz-ripped hurtling verve with which they’ve made their reputation has diminished a single jot, it’s simply been given greater layers of (again, gasp!) refinement. The results are sublime in a mostly explosive sort of way.

Where an articulate and literate lyrical wit has always counted as one of the band’s bonus assets, on Versus (pun intended, one’s sure), it’s clearly been administered some kind of booster shot. Indeed, a jaundiced eye has seldom been known to see so astutely, as Eureka California – for the most part (the exception being exceptional and soon discussed) – hard charge down the tracklist drag racing their petulant intelligence across your cerebrum.

From the start, already careening toward the guardrail at reckless speed before swerving wildly back to safety just in time, “Eureka California’s Night In” is something of a Billy Childish roar contained inside the power punk economy of the Adverts. Next up, “Sign My Name With An X,” though sparse of lyric, emerges as a quick monster lesson on how to turn two minutes into a Mothra-sized riff-fest before ceding to “Another Song About TV” whose punchy tube sock rhythm and poppy vocal melody not only gives an impression that the TV screen in question is a flickering B&W with a 70’s chassis but also claims a lineage with such legendary indie labels as Ace of Hearts and Beserkley, that same jaded innocence, that snotty youthful zest that belies the often tender admissions hidden within (sample lyric, clearly discernable as always inside the garagey bluster, another hallmark of that vintage sound: You wanna know why I don’t go out, I’ll tell you why / when I turn on the TV it makes me feel like someone’s home). Sure, these Eureka kids are a mite more amped up about it but by and large that comparison marks the default (if wholly uncontrived) setting here and it serves Versus extraordinarily well.

“Sober Sister” launches with a sweet clean Kiwi pop-like guitar line atop a tripletted frenzy (Ms Uhler ain’t playin’ games behind that kit) before submitting to the submarine fuzz. “Cobwebs in the Wind” answers any curiosity you might have had as to what it would have been like had Hüsker Dü and the Replacements done a deal at the beginning of the game and traded lead singers, “Ghosts” has a fine, almost beer hall lurch to it, melancholy and adrenaline knocking back a few, while the brief “Caffeine” spends its first third in a dreamy decaf lament, some electric strumming in the morning sunlight before the flip gets switched to all-out hauling mania a la Dinosaur Jr minus the stoner’s drawl. Two of the last three seem to seek the ‘epic and monumental’ and shock no one at this point by finding it. “Realizing Your Actuality” clocks in at 4:03, uses some punctuating reverb and Ward’s rawest, most beseeching yowl of a vocal to convey the song’s teetering catharsis and is the band at their most emotionally feral and effecting best. Final track “I Will Write Mine Over Potomac” stretches to 5:20 and earns that finality via a tired but defiant, undyingly vibrant vulnerability, rich with an aching, Everyman perspective that Protomartyr’s Joe Casey would be proud to lay claim to. It’s poetry written in thunder and corrugated regret, it shudders with poignancy and it’s not even the record’s crowning triumph. 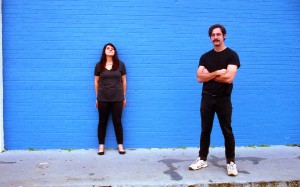 “Fear and Loathing in the Classic City,” smack in the middle of the tracklisting – it ends side one of the LP – is, for one, just Ward with an acoustic, miked close enough to hear his fingers scraping over the frets. Secondly, given that level of intimacy, it’s Eureka California at their barest, most exposed, almost unthinkably so (far more so than on”Actuality..” or “I Will Write..”), Ward laying out a soliloquy of doubt and wonder, the words as he addresses some hidden conflicted version of himself in an alternate mirrored universe amounting to a delicate existential despair made all the more immortally bittersweet by that very delicacy. And here’s the funny thing, an aside of sorts, neither here nor there, as they say: that Beserkley mention above? As I was first hearing this track the other morning, rather marveling at its stark right-there-ness unprotected by noise or bash, a mental note was made along the lines of ‘Jonathan Richman in his own long dark night of the soul, abandoned by naiveté,’ that sort of thing when just then Ward sang “Oh I’ve been wasting away / to the sounds of the Modern Lovers.” And here I thought I couldn’t fall more in love with this record.

In any case, hearing “Fear and Loathing in the Classic City” is the moment you realize with an epiphanic jolt that Eureka California have crossed over from a jarringly good punk-injected indie band to what we might justifiably call a major presence. Conceptually, aesthetically, they’ve arrived. Or, yeah, if one prefers, they’ve grown up.

And there’s just this one last thing I’ll say: Eureka California are now one of my favorite bands.