“Be you still, trembling heart,” Yeats once wrote. “Remember the wisdom of the old days.”

But it’s the old days that keep our hearts trembling through the years and wise as we may be, the past will continue to bring us weakly to our knees.

Yeats knew that and though he also advised that “all men’s hearts must burn and beat,” he offered no guide for the aftermath because there isn’t one: the cost of all that burning and beating is, ironically, a permanently trembling heart.

Dodge McKay’s new album Yesterday, Today and Tomorrow is all about that trembling and all the time in between. It’s a stunning song cycle that addresses love, loss, memory and desire and it does so with a tuneful, poetic finesse and a crushing emotional precision.

Although they seem like steady, impenetrable ideals, the past, the present and, ultimately the future, are, in many ways just metaphors, as vulnerable as the temporal body is to time and McKay’s songs survey this terrain with an aching exactitude. The Irish-born singer/songwriter, who made two brilliant albums in the early ’90s with his band Ghost Of An American Airman, is the kind of singer who knows how to embody a song. His voice is a rich and wondrous thing and in a single phrase he has the ability to hit you square in the heart.

The mournful “All My Days” is an unflinching look at loss; “I Remember You,” is a reflective look back and “Soldiers” is a moving narrative about the cost of war that sounds like the elder cousin of New Order’s “Love Vigilantes.”

Elsewhere, there’s the spry “Belfast Boy,” the rolling beauty of “Island Man,” and the devastatingly lovely “Used To Be…” which is one of the most gorgeous, heartbreaking songs ever written.

“Lost on the sea/no map and no compass,” he sings on “Volunteers.”

It’s a busy sea to be lost on–busy with all of our boats trying to find our way to something to hold on to.

DM: Stereo Embers: First of all, welcome back. How have you been?

SE: Can you talk a bit about the gestation period for this album? Was it something you were thinking about for a while?

DM: A few of the songs on the album had been around for quite some time, in one form or another (“The Street” going way back to 1994; the verses for “Volunteers” from a session with Michael Ward [BHIC, Gogol Bordello, School of Fish, John Hiatt etc,] in 2000 and an early version of “Island Man,” again recorded with Michael, in 2003, with his usual fantastic lead guitar).  But the bulk of the other songs were written over a shorter period, I guess as a way of dealing with personal upheaval. I did want to document them, but was having trouble recording them to my satisfaction. So I let them lie. 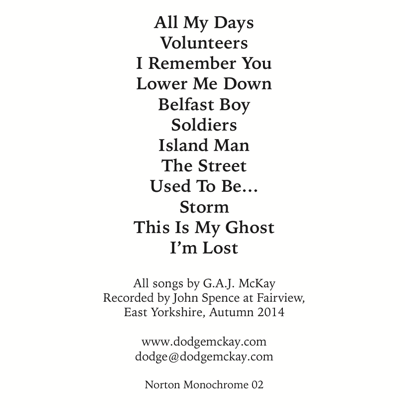 Also, I had pretty much stopped playing shows for the longest time, but on a visit to Austin Texas, in 2011, my friend Raymond lent me an acoustic guitar and convinced me to get up at some open mic’s and also organised a couple of non-paying pub gigs. (I had only ever played one other solo show, in 1994, opening for the Kinks in Belfast at the Ulster Hall.) When I came home I slowly started getting gigs locally and I guess that was the impetus to record something, as I was getting really great feedback about the songs that I had written. Lots of people would ask if I had any recordings available. And of course I bloody didn’t. So I had to remedy that. After a couple of false starts, I booked a day last September at Fairview Studios in East Yorkshire with John Spence, just to see how things would go. I’d worked with John before (eh…1998. Time before that was 1989!), but he made the recording environment very relaxed and I guess that was the clincher. He set up a ton of mics and made it sound great and I just played through the songs two or three times and we kept the best take. So I booked another day in October and another in November. I wanted to keep any overdubs minimal, so the recordings would reflect how someone might hear the songs if they came to a show.

So…after a very long gestation, it came together quite quickly.

Convoluted? I guess the simple answer would have been: “yes”.

SE: Good god, opening for The Kinks! Were you terrified and how did it work out?

DM: From what I remember it was a last-minute thing, so I didn’t have time to think about getting nervous. I think the gig went pretty well, but after my short set, Ray Davies came out before the rest of the band and ripped through his own acoustic set. Which was fantastic and obviously knocked mine into a cocked hat. But I’ll let him off. I’d obviously rattled him (tongue very firmly in cheek).

DM: My friend Tim once remarked that all my songs were about God, sex and death. I think death pervades over the songs collected on Yesterday, Today and Tomorrow. I hadn’t really thought of the songs being linked thematically, but I was asked about this recently and I guess the pervading seam that runs through all the songs is loss, or being lost.

SE: Do you think it’s possible for an artist of any kind to ever feel satisfied? Or, like happiness, is artistic satisfaction a temporary state?

DM: Tricky. Speaking for myself, I was striving for something that wouldn’t make me feel physically sick if I had to listen to it, but I didn’t want to be so precious about it that I tweaked the life out of it. I guess you have to learn to know when to let it go. And sometimes I think the person that created the work, isn’t always the best judge of the end result.

SE: Death does seem to almost be a supporting character on this album–an unbilled player, yes? But I also have noticed that there’s a recurring theme of the past in your work. On this album and with your old band, the past seems to be something that you’re grappling with. I suppose that nothing can jolt one back to the past faster than loss, but on that subject, what do you think the function of the past is in our lives? Why do you think we wrestle with it so much? 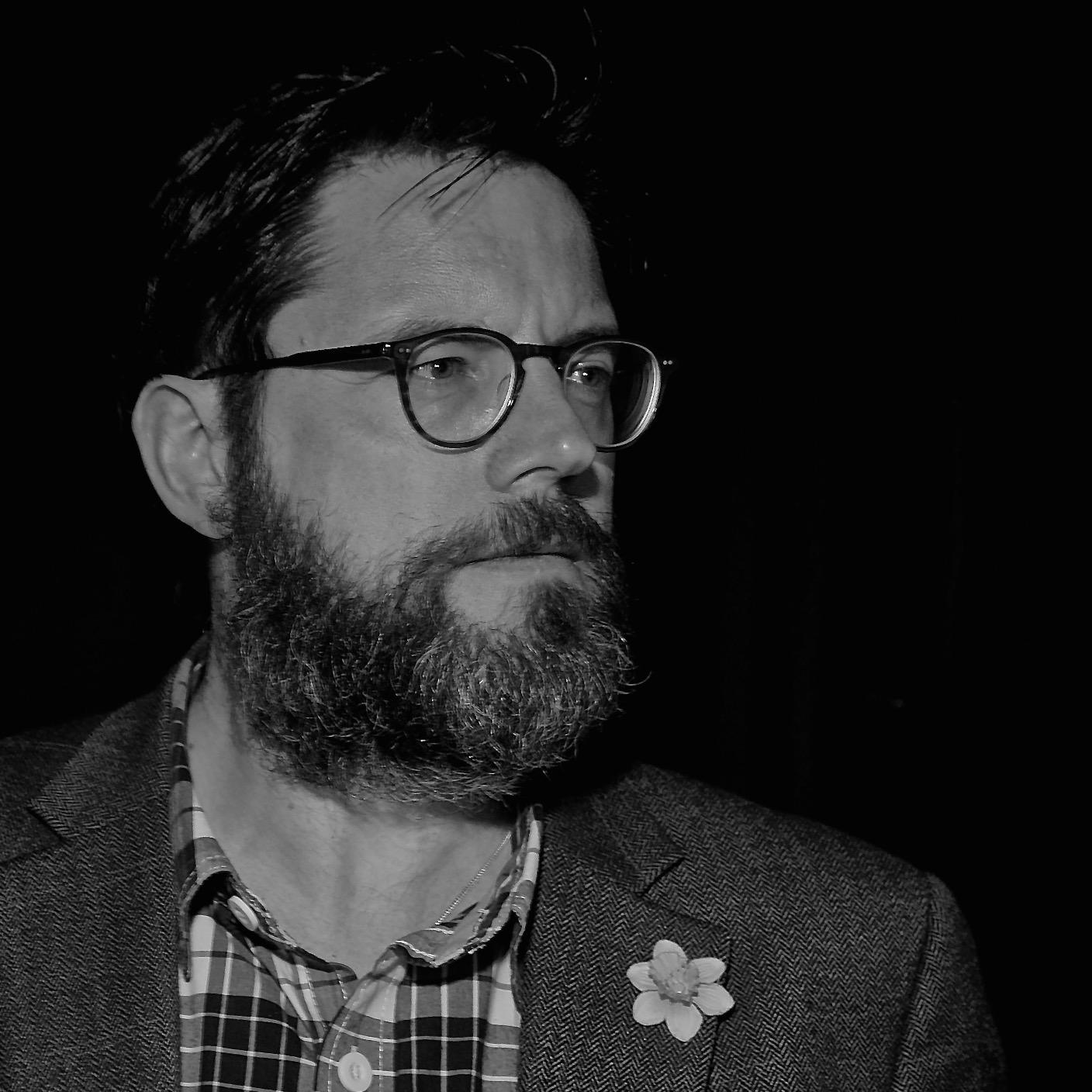 DM: I think we are surrounded by the past: good and bad. And I guess by addressing the past, it lets things move forward. Where I come from, the past informs the present in so many ways. And casts a long shadow. I guess the trick is to try to learn from it.

SE: This album is unreasonably lovely–the finesse you display on this song cycle is nothing short of stunning. Was it hard to “let go” as you mentioned? Because there’s an effortlessness here that doesn’t seem to indicate that was a struggle…

DM: Thanks for the very kind words. I don’t think it’s perfect by any means, but I guess I believed in the songs. And I really did enjoy the recording sessions. Just playing and singing the songs, trying to get a take and then pick the one that felt like the best overall performance. And not get hung up on the blemishes.

SE: Is this album a sequel of sorts to Sound of Waves? How are the two linked?

DM: No. Linked only in chronology and that it’s just me: there’s no-one else to blame. The songs that made up Sound Of Waves were recorded on an old Tascam 4-track in the spare room: just me doodling. I would put extemporaneous musical ideas on to tape and then try to sing over them. With varying degrees of success and no thought to ever learning/playing them in a gig situation. My friend Chris asked me if I was writing: I sent him the ideas that I had been working on. He said why not put them out? I thought they were rough as a Badger’s bottom. But in a strange moment of accord, I said ok, if he wanted to put it out, fine. He called my bluff and he did. This new thing, as I mentioned before, happened from the other direction: I wanted a snapshot of the songs that I had been playing at gigs.

SE: I really love “Belfast Boy”–from Joyce to The Pogues to Yeats, Irish identity is a recurring theme in music and literature. Do you think a lot about what your own cultural and national identity means?

DM: Yes. And no. I’m a bit wary about national identity: whatever your nationality is. I think that’s got us into a lot of trouble before. So If someone asks me where I’m from I’ll usually just say Belfast and they can decide what they think I am. On the positive side, it affords me the luxury of dual citizenship. I can have a UK passport and an Irish passport: It’s nice to feel wanted.

SE: Was album sequencing a tricky thing or did the order come naturally? What I love about this album is that it feels so cohesive; it opens and closes perfectly and everything in between feels like a linear movement.

DM: It took some trial and error to get to the final running order, but in the end, the song sequence was based on the LP format. Breaking it down into two ‘sides’, seemed to make it easier to hang the songs together. Side one is the quiet side, side two the quieter side.

SE: “All My Days” is a lilting killer–I love this song. The line “All my days are filled with sorrow…” is so heartbreaking and honest and not dressed up in metaphor or figurative language. Can you talk about the roots of this song?

DM: “All My Days” is about loss, in this case a very personal one, but unfortunately one that many people can relate to. It was my reaction to (and how I coped with) the death of my mother after her long and protracted battle with cancer. Watching her fade away without being able to do anything about it was absolutely heartbreaking. I felt utterly helpless and bereft, just like a little boy lost . About a year after she died, the words just came out. I couldn’t dress them up. I didn’t want to. It hurt to sing. It took a long time to be able to get through it from beginning to end.

SE: “I Remember You” is particularly wrenching–a stunner, frankly. And it certainly addresses the resonance of memory. T.S. Elliot linked memory with desire–do you feel the two are connected?

DM: I wanted “I Remember You” to be more open to interpretation: I think it can be read as a straight love song about paths taken/decisions made and remembering the consequences of that, good and bad. But I also wanted to disorient the listener: to cast some doubt upon the recollection and infer the distortion of memory.

SE: Tell me a bit about “Island Man.”

DM: I wanted “Island Man” to sound like an old song, a folk song, so I dispensed with a chorus and tried using “beyond the pale” and “all the kings horses” to try to make it sound archaic, but also place it somewhat, geographically and historically. It’s a song about migration (not always by choice) and considering what is lost and left behind when leaving.

SE: How do you think your songwriting has changed over the last two decades?