Some background: I entered Elliott’s orbit (I refuse to refer to him as “Smith”) around the time that many people did—in 1997, when Either/Or was released. I don’t remember how I found out about the album. But I seem to remember going to the long-gone Tower Records on Guadalupe in Austin. Kierkegaard—whose book Either/Or was on my brain because I had found some connections between it and the work of Samuel Beckett, one of the topics of my dissertation—probably inspired me to purchase Elliott’s CD.

I brought the disc home—finally having found what I thought was the perfect soundtrack to my faux angst-ridden, graduate-student life, a record that would create the same feeling of despair that I felt when I spun Radiohead’s OK Computer, which at the time seemed like the unanimous critical choice for the record that best captured the zeitgeist circa 1997.

When I faded into Elliott’s orbit, I faded out of Radiohead’s, so much so that “Speed Trails” became the frightening soundtrack of what was actually going on inside my head. Elliott’s use of the second-person pronoun “you” in the song ripped a hole in me that led directly to my soul—whereas “Paranoid Android” became strangely comforting in that it made paranoia and dehumanization paradoxically seem more human and universal for the very reason that we all experienced them. Radiohead provided comfort; Elliott scared the shit out of me.

He still does, as does Schultz’ biography—which I posit succeeds so brilliantly because in spite of its early attempts to link Elliott’s death to the deaths of Kurt Cobain, Nick Drake, etc. (in a chapter titled “The Smith Myth”), never takes the easy way out and presents Elliott’s life as “The Road to Suicide.”

What I take away from Torment Saint is the opposite of that “easy way”—so, in a way, the biography reiterates why I can’t get over Elliott’s death. His demise wasn’t inevitable; it didn’t have to happen; he wasn’t on the road to nowhere. It didn’t have to end that way. 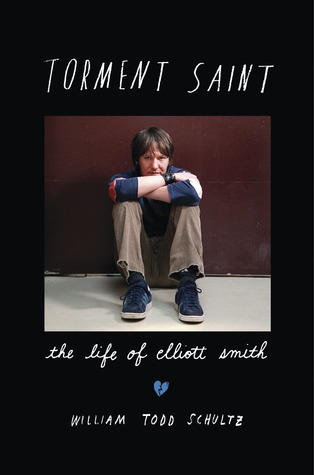 If you’ve ever read the historian Hayden White, you know that any biography—or any history, for that matter—is essentially fiction. Biography uses the same devices of plot and character that the greatest novelists use. In fact, we’re so exposed to narrative as a series of causal events that we tend to see our own lives that way. This kind of thinking allows Joseph Campbell to say that “we’re the heroes of our own lives” or some such.

But the key is that our heroism is essentially fictional. It doesn’t exist, except as the stories we tell to ourselves and as the stories that others tell about us. Our lives are words, strung together in tangled webs that—let’s face it—change from one minute to the next. One minute your wife’s decision to leave you transforms you into a heroic survivor, and in the next, her decision marks you a tragic hero, Lear raging on the heath.

Once you realize this—as Elliott does in Torment Saint—you run the risk of seeing your life as inconsequential. You are just a fiction, after all. And what’s more fictional than also being the fictional construction of the media—the “sad sack” performing his sad song “Miss Misery” at the Oscars.

Unlike Nietzsche’s Zarathustra, Elliott could never embrace the joyful wisdom of the liberation from the permanent, unchanging self (I can’t either). Like Kierkegaard, however, Elliott recognized the despair that results from the realization that one’s birth was inconsequential.

Kierkegaard argues against this despair in The Sickness Unto Death, which Elliott must of come across in his vast reading. Kierkegaard’s remedy? Faith in God and in the eternality of the “mortal” self, even in the face of an existence in which death seems final.

But how, to use Kierkegaard’s terminology in Fear and Trembling, does one become a knight of faith and avoid becoming a knight of infinite resignation?

Elliott’s great tragedy in Torment Saint is that he resigns himself to the fact that his existence is infinitely meaningless—which leads to his nihilistic certainty that his life (and, by obvious extension, his art) doesn’t matter.

So Elliott sought out oblivion, first through alcohol and other legal and illegal drugs. This oblivion was a respite, a calmative that gave the illusion of a permanent, stable self. But they didn’t work. The psych drugs didn’t work either, leaving Elliott bereft.

Don’t get me wrong—I don’t mean to sound like I’m criticizing Elliott for the path he chose. Becoming a knight of faith—that is, recognizing one’s own immortality in one’s mortality, even though that recognition requires a leap of faith into faith in the face of the absurd—is the single hardest accomplishment one can make. And it never ends. It isn’t a matter of finding a Higher Power and surrendering oneself to that HP every day (Elliott tried A.A.); rather, it’s a matter of maintaining one’s faith, even as one absurdly exists, in every single moment of every single day. The knight of faith is active, a creature of will, whereas the A.A. member is passive.

And—let’s face another fact—artists, and especially artists of Elliott’s abilities, are active people. They’re creatures of will. It’s no wonder, then, that A.A., as Schultz reports, didn’t work for Elliott.

Elliott instead turned to the people he trusted—writers and artists. He read Kierkegaard, Dostoevsky, Kafka, Beckett, Stendhal, Freud, and the Buddha and listened to records like Joni Mitchell’s Blue and Bob Dylan’s Blood on the Tracks. These writers and records discuss the self as a fictional and impermanent illusion and deal extensively with human suffering.

Schultz argues that Elliott, through this reading and his childhood experiences of abuse, developed a sense of compassion for those who suffer—hence, the word “saint” in his book’s title.

I agree with this assessment. It’s Elliott’s compassion for others that led to the creation of his strongest songs—the ones that, in particular, populate Either/Or, XO, Figure 8, and the posthumously released From a Basement on a Hill. It’s why when you listen to Elliott singing in that beautiful and fragile whisper of a voice, you hear him singing directly to and for you.

But I’m not here to judge Elliott. What his music has taught me—and what Schultz’ excellent book has reinforced—is that I have a choice. And that choice truly is an either/or (and I don’t care if a Kierkegaard specialist would say that I’m getting this all wrong). Either I have faith that my existence matters or I don’t.