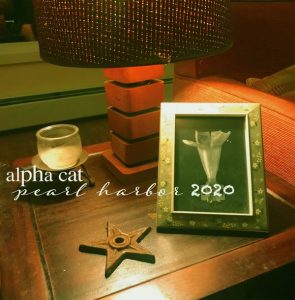 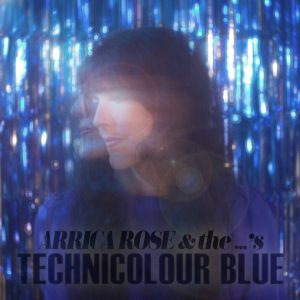 In the interests of efficiency and a directness that this current moment in history rather insists upon (and, frankly, to make do until the brain trust at a certain widely used publishing platform allows the return of that basic, modern-day editorial element of embedding hyperlink tags of source material in the text), we’re not only going to cover these two artists’ latest work simultaneously but do so while dispensing with their equally rich and compelling back stories. Both have been covered – and are therefore easily searchable – in the pages of SEM should you, as we believe you should, be curious. Context is, as they say, key, but with songwriters of this strength and character, should you choose to judge these releases solely on their in-the-moment merits, the rewards will be nonetheless plentiful and fulfilling.

The material created by both Elizabeth McCullough, the beating heart at the center of Alpha Cat, and Arrica Rose with her dot dot dots (the preferred enumeration) derives from the fervent matrix of late 90s/early millennium singer/songwriters (McCullough and this album, in fact, both being a product of that very time; more on that in a sec) that at its core drew from the original 70s template of same, primarily because how could they not? Joni Emmylou Linda Sandy – just to tick a few of the more prominent boxes; there were scores, of course – collectively created a breathtaking palette the breadth of which is essentially beyond measure, a wellspring of femme mojo that will never not be influential, directly or by osmosis, until well past our mortal tenures no matter what age you are. None of which is to say that one finds direct stylistic links that can be tracked with inarguable clarity back to Hissing Lawns or Hastening Winds. Instead, both these artists, each by their own homing devices, are steadily claiming their own fresh terrain in what is a particularly fertile landscape.

Of the words in the previous paragraph’s last sentence, the most germane as applied to both these releases is ‘fresh.’ In the case of Pearl Harbor 2020 with its bustling resilience and a bristling honesty that’s often just this side of scathing (yes it’s something of a breakup – or, more accurately, an abandoned heart – album but in its fully taken measure is so much more), the freshness of its sound is perhaps all the more remarkable seeing as that year date appended to it is to distinguish it from the version – virtually unchanged here but for two intimate songs tacked on to the tracklist’s end – that originally appeared nearly twenty years ago. Having met Television bassist Fred Smith in New York and playing him the songs that would become 1999’s Real Boy EP, he agreed to produce it. That record garnered significant attention which in turn required the snap acquisition of a live band and both Smith and that band remained on board to create debut LP Pearl Harbor which, upon completion, was assigned a street date in October 2001, a mere month after the world had come down around our shoulders, a fate not exactly ameliorated by the album’s title. Propitious this was not (even as some traction was gained when the album was re-released in 2002), but fortunately Pearl Harbor, and its author, were forged of stronger stuff and the record has not only refused to recede into the blur of history but has maintained – or even, it could be argued, increased – its strength. Opener “Something of Value” still snaps and swings with a zest that recollects just about anything David Lindley ever played on, the horn-bolstered, guitar-stinging “Once Upon A Time” rumbles with the same pop force it always did, the dark sustained swoon of the title track’s restless moodiness has not lost any of its loomingly hypnotic appeal. And for goodness sake, “Black Hole,” for a song that begins with the couplet “I’ve fallen into a black hole/looked like your heart felt like my soul” still manages to carry itself with an almost perverse buoyancy, a textual anomaly that right there underlines the album’s deathless currency, the implied dynamic throughout the thing, at its most distilled, seeming to be the message ‘resilience in spite of it all,’ to which nothing more need be said regarding its abiding timelessness nor, especially, the wisdom of having those four numerals patched on to the end of its original title. No message, in fact, could have a fresher relevance to the state of play in February 2021.

But the other quality that lends Pearl Harbor its zing, and that, in a surprising/not surprising way critically links it to Arrica Rose & the …’s new Technicolor Blue, is its sound, the almost offhand assurance of its ensemble playing. If one goes back to those records from the 70s, among the fundamental aspects that sets them apart, and lumps them together, is the casual intensity achieved by the (most often) session musicians bringing those songs to 3D life. It’s a loose tight cohesion vibe that suggests itself with some force in the Alpha Cat brew – surprising, them all being pretty much a New York bunch – and that has always been a vibrant ingredient in the lovely noise the …’s produce at least since first hearing them on Rose’s masterfully clever Wavefunction album in 2014, a fact that’s not so surprising given that the singer is resident of both LA and, as that record, a beauty of West Coast yearning pop, made more or less clear, the Bay Area. It’s worth noting, though – and to make final use of the premise here – that inside that ‘loose tight’ paradox posited above, Rose and her crew fall more toward the former, the band, with her voice, evincing something of a languid vivacity.

Whether it’s the lush, seductive groove of first track “The High” that nudges itself gracefully forward inside a tantric haze of longing – one of the most cringe-free pieces of sensuous pop songcraft since the misty days of Kate Bush – “Undo Me Slowly”‘s beautifully crafted, allusive thread of a narrative (“it’s the end of the night at the end of all things / but the mind plays tricks when the heart isn’t listening“) unspooling at an intimate pace across its six minutes, the terms ‘gentle’ and ‘powerful’ melding together like two unlikely but inevitable lovers, “Kaleidoscope,” lightly swept up in strings counterpoised by a bass bringing oblique shades of Twin Peaks-ian intrigue, or the simply extraordinary “Once in a Lullaby (Over the Rainbow For What It’s Worth Ohio)” that, yes, flows both Stills’ and Young’s Vietnam era classics into the sacred text of “Rainbow” to great and artful impact, creating in fact something of a new protest classic in the process, the overarching atmosphere of Technicolor Blue speaks its own language in structure and tone, a fevered yet temperate dialect of place that captures the laid back tension, the ambition and lassitude, that animate the collective West Coast mindset. That it’s gorgeous is just a bonus, that it’s lithe and moving is just a bonus, that it sparkles and wanes just like beauty itself is just a bonus, and every one of those bonuses, and more besides are, critically, the actual point.

Two artists, then, from two separate coasts separated by thousands of miles and yet, running through both their voices as if in implicit harmony, is a timbre echoing up through the decades, McCullough and Rose not so much standing on the shoulders of but rather, consciously or not, drawing their breath from that shared and rarefied air and singing it out it in a manner meant for the times in which they live. The songs change, of course, their authors being of a generation once removed, but their eternality remains the same.