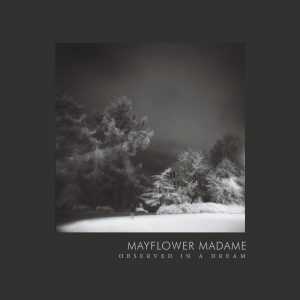 We begin in a chamber of noise, nightmarish but not oppressively so. It’s a track called “Confusion Hill” and at exactly the one minute mark we emerge, welcomed by a warm haunt of bass and accompanying drum, by a crystalline tolling of guitar, by psych-dappled textures that in this darkened atmosphere suggest we’ve stepped from that semi-nightmare state into something far dreamier, namely the expansive, unconfined confines of an Echo chamber. The impression persists, if only glancingly, once the sonorous low-key glory of the vocal arrives but it doesn’t take long, as Oslo quartet Mayflower Madame’s debut Observed in a Dream plays out, to understand you’re in the presence of an album – and a band – that well exceeds the bounds of mere simulacrum, distilling its multiple on-the-sleeve influences into a singular musical impulse all their Nordic own.

“Lovesick” carries on with a tight rambling chime menaced by a loitering western outlaw vibe that finds the Gun Club hanging out in the Swamplands, the shadowed “Self-Seer” builds on an immaculate tribal thrum (drummer Ola Jorgen Kyrkjeeide’s work is crucially vital to May Mad’s sound) to become a kind of dry-iced, heat-shimmering scorcher, the short punchy “Weightless” has an eerie skeletal vibe hovering over it thanks not least to a silvery glow of synth balanced by the frontier gleam of Rune Øverby’s guitar presence that together lend the track a half ascetic half desert feel, while the title track settles into the expansive, sprawling with a somehow desolate claustrophobia, a bass (Petter Gudin Marberg) leading down snake-infested arroyos and around the corner into the reverberant lurk of a chrome-grey crevasse. Rising up from under and/or weaving through and/or suspended above all this the glowering, adept authority of Trond Fagerness’s vocals, a lucid near-baritone wraith presiding as if it has the law of ancient runes locked securely in its invincible timbre.

The pieces of Mayflower Madame fit together with a svelte organic might that reflects a long, strong dedication to the idea of ‘being in a band,’ a vaunted concept that in some quarters is becoming anachronistic but these four show reports of its demise to be decidedly premature. One only need listen to Observed in a Dream‘s final cut, called with not a little plaintive irony “Forever//The End of Everything,” to hear convincing proof of the cohesion on display throughout the record, the track moving through its movements with a seamless faultless ease until it flirts with the borderline of a modest epic. Gang, brotherhood, family, whatever, the validation of the ‘unit”s value presents as a living force over the intrinsic flow of this record’s eight tracks, and it would be surprising indeed if the record didn’t end on a timeless note. [available here on vinyl, very limited (only 25 made) edition CD, and digital download] 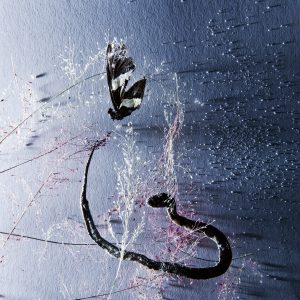 Once again it’s about time ’round here. Early entrants to the NEXT lists (appearing on #4), Rakta, an all-female trio out of the exciting – and prodigious – environs of São Paulo, at last receive the detailed coverage they deserve from the SEM post-punk desk. Bringing a rousingly complex noise to the table fueled by both an alluring – at times fierce – primitivism and a fearless, almost experimental precision, the band, with an instinctive clarity, captures then exudes the inherent tension one might expect from artists living in a hyper-urban setting – São Paulo’s metro area is the 11th most populous on Earth – carved from the wilds of an ancient rainforest. Also crucial – and to rebut any impression that the gender mention up above was gratuitous or paternalistic – is the presence of an undiluted femme energy helping propel Rakta’s sound. While just as muscular as made by any of their XY-chromosomed peers anywhere in the world, the material these three create gains an added force from the bonds thus formed. In itself hardly a unique proposition, of course (especially in punk/post-punk/etc), but the combination, in this case, of biology with place of origin has resulted in a growing body of viscerally stunning work – think the Slits reanimated by a dash of Os Mutantes’ occasional tribal impulses and heavily injected by the drive of early 80’s Não Wave – that not only finds them standing shoulder-to-shoulder with such notable predecessors but is bound to prove equally enduring. It’s a legacy III – named, it seems, for the band members’ number as this is Rakta’s second full-length – does nothing but add to and powerfully.

Resounding like thunder in a tunnel, “Raiz Forte” opens up III‘s Pandora’s box with an uncoiling of compressed energy seemingly released mid-burst with something distinctly jungle snake-ish in its rhythms and atmospheres, the voodoo bass (Carla Boregas), the lashing drums (Nathalia Viccari), the spellbinding trance of Maria Paula Aurora’s voice all contributing to a delirious and humid claustrophobia that makes you want to shed your skin and lose control of your muscles. “A Violência do Silêncio,” with a merciless grandeur, unspools in a scathing roll of unrelenting distaff howls shrieks and excitations courtesy jagged sharp guitar distortion, synths in various states of duress and vocals from the shadows of a lost asylum bouncing off the walls, all eventually cohering with an awful grace into a piece achieving a Swans-worthy level of power and monument, its subject matter blowing through the language barrier with a primal emotional anger too familiar to all of us.

Pre-release single “Interção” follows with an unrelenting hauntological prowess, its amalgam of elements straining the assumptions implicit in the word ‘trio,’ all of it piled around the mantra-like prowl of a bassline strung through the track’s three minutes with shamanistic authority. But where the band reaches deepest on III is on the longer tracks, the fevered and revelatory “Filha do fogo/Conjuração do espelho” that spends its first half approaching trance transcendence via a motorik pulse subjected to tropical friction and its second half in tribal variation of same albeit one visited by those dark psych night demons we love so much, and the concluding “A Busco do Círculo,” a propulsively wandering juggernaut that, having lured us from a primal cave of noise – a desolate wind and sheets of rain are suggested – transports us as through bruja-infested favelas, our pulse pounding with being-chased adrenaline. That atmospheric set-up perhaps trails on a tad too long but as the track’s final five minutes are, in a phrase, exciting as fuck, the interlude in retrospect is most welcome.

Sulphurous and glowing with intensity, the work on III shows a band whose artistic drive is ferocious and, in some ways, demanding. The music Rakta make does in fact dare our senses to pay attention, to become absorbed, but in the end that’s hardly a problem since the quality of the songs ultimately turns that challenge into a deliriously punishing joy. [grab the vinyl here] 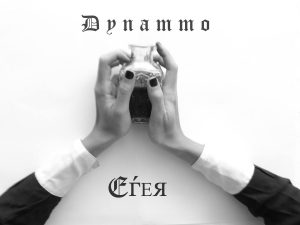 Combining a distressed shoegaze sensibility with the dark dramatic impulses of post-punk at its most thrummingly shadowcast while adding in the occasional detour into pop’s more fetching nether regions (“Chinito” tracks an urbanized wave like a narcotic neon dream while “Abejas Asesinas” imagines Morricone if he’d never aged but instead joined a punkier version of Stereolab and yes it’s excellent), Dynammo, a trio based out of La Plata just south of Buenos Aires, present a debut full-length – following their 2014 EP 1980 – that prowls and vibrates and powers forward with such assurance as to recognize that their naming that EP as they did wasn’t so much a gesture of winking stylistic hubris as it was a simple, matter-of-fact statement of prowess. These three, it would seem, on the basis of Éter, were indeed born out of time.

Insisting, for the most part, on the short and taut – eight out of nine songs on Éter come in under three minutes, two of those not surpassing 120 seconds – the band (Facundo Ve guitar and vocals, Selavi Caramba bass and vox, Luca Benitez percussion) make the most of that brevity. The title track starts things off with sweeping, bass-heavy veils of sound that portend beauty in the service of doom and never lets up. “Yxpo” is something akin to synth-pop gone a bit maniacally off-the-rails even as it’s held together with a tight propulsive tension, “Cementario” fits on some unique continuum arcing between the Church and the Cure while sounding precisely like neither, and the agile drive of “Departmento” suggests a more muscular, just as cerebral Polyrock, a slyly wonderful – if inadvertent – referent that I’m sure you’ll join me in applauding. Toss in the dreamy brood of “Del Espacio,” with its glancing hint of tropicalia (as interpreted by the Cocteau Twins maybe despite its aggro-burst of a guitar coda) and “Estada Real”‘s lengthy – by Dynammo’s standards – swoon of aching cinematic beauty, full of panoramic multi-tracked vistas of reverbed chime and all the immortally fragile vulnerabilities those words imply, and we end up with one of 2016’s most unforeseen gems. One wonders what others remain undiscovered in the vastness of the South American continent. Even if they don’t all rise up to the level set here on Éter we nonetheless assume there’s a wealth so consider this the official call-out: Get in touch, we want to hear it all.