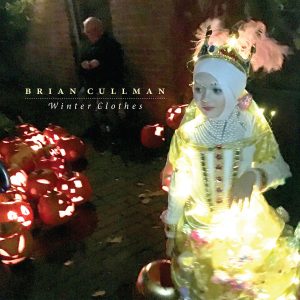 Artistic alliances, especially of the musician stripe, are deep-running things, inscrutable, allusive but undeniably there. It’s as if two sets of DNA had somehow intermingled and now each artist’s bloodstream floods with the other’s and there’s no going back. We’ll surmise here that such was the conduit between Brian Cullman and Jimi Zhivago – an assumption supported not only by the quality evinced here on Winter Clothes but as well and more poignantly by the impact Zhivago’s unexpected passing in October 2018 had on Cullman’s spirit and thus this project’s completion (delayed for over a year) – though from what we’ve been able to tell it wasn’t rare for either one of them to forge that level of connection with other musicians so, together? Fait accompli.

Yet even with that said the spark that suffuses at the core of this record is notable. Primarily down to that immutable Cullman-Zhivago bond – 90% of Winter Clothes was done by that October, tracked by the two friends with the help of drummer Chris Heinz and backing vocalist Maryasque Fendley – the calling in of crucially key collaborators to provide some finishing touches past the mourning hiatus turned an already solid set into a rousing, inspired tribute that befits not just the caliber of Zhivago’s talent but of their friendship as well. Those friends – Jimi’s fellow Ollabelle founders Byron Isaacs (bass, now a Lumineer) and Glenn Patscha (keys, now in Bonnie Raitt’s band after a stint with Ry Cooder) along with guitarist Chris Bruce, freshly returned from T Bone Burnett and Sam Phillips gigs in LA – loaded with chops and finesse, ensure that every dotted musical I and cascading crossed T is completed to their fullest subltety.

“Killing the Dead,” opening, its percussion a thunder, an acoustic strummed like Richie Havens on the run, takes an existential swipe at gothic americana and comes out as catchy as a sunny jukebox afternoon. Searing allegorical rocker “Down Down Down” with its Bo Diddley bounce sports one of the year’s most intriguing opening lines – Oh the night was dark and the fog was rollin’ in when the doctor came by with his broken mandolin – and only gets more Dylanesquely spry as it builds out, reminding along the way why the young Cullman was drawn during his early adventurous travels to Nick Drake and his contemporaries and they to him.

Those are just the first two and tracks and trust us when we say you’ll require no further convincing though, zero surprise, Winter Clothes, from the skeletal blues of “Someday Miss You,” Zhivago’s guitaring here especially moving and effective, the deft N’Alwins romp’n’ stomp of “Slept It Off” that’ll have you dancing in your head with the ghost of Alex Chilton, to “Building” that closes the record, a haunting ode to the indominable will and fragility of the human endeavor that shivers with bespoke guitar tones, keeps piling on the persuasives with an immodest glee.

In sum a humble elegy (as it sadly turned out) constructed of pure work and even purer devotion, Winter Clothes as tribute is, in itself, compellingly worthy of attention. As an urban americana-tinged rock album, it’s basically an exercise in songwriting bliss. [Winter Clothes available here] 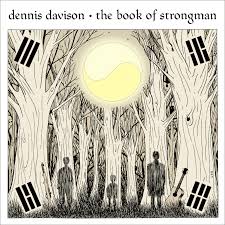 If you were a fan of The Jigsaw Seen you’re a fan of this album. If you’re a fan of records from the late 60’s early 70’s that melded slightly psychedelicized prog (AKA chamber) pop with singer-songwriter acumen, you’re a fan of this album. If you’re drawn to records made with the studio boffin go-it-alone work ethic of Todd Rundgren, boy do we have an album for you. If you crave the days of even modestly elaborate packaging with such attributes as eye-catching artwork on a gatefold cover with a smart elegant lyric book securely attached within (not to mention an inner paper sleeve for the full miniature LP effect) – all designed by Doug Erb just to give props – then by all means step this way.

In its fashion a lifetime in the making – the genesis of closing track “What the Hell is That Noise?” dates to a 1980 bedroom effort with still-friend Kevin Mackenzie – The Book of Strongman from Jigsaw Seen (and United States of Existence) writer and front man Dennis Davison doesn’t just skirt around the edges of excellence but rather crashes across its border from the off, offering as his passport a type and level of craft not often practiced in this too easily cheapened time.

Kicking into immediate gear with the track from whence the album’s title, “Strongman and Sonny James,” against a buzzing, delicately pounding backdrop and in dizzying quasi-biographic detail, unravels the tale of Davison’s dad’s having fought in Korea at the side of the future country star and weaves it back into a much broader, multi-dimensional cloth that is then, as needed, stretched and further embroidered across the length of the album according to the shape of each succeeding track. To say that Davison has a dextrous imagination is to state the obvious with a bludgeon. Seeing as he covers every aspect of this recording including its tone-perfect production, it would seem that he has at his disposal a boundlessly wide creative flow from which he can tap at will.

“In the Folly of Youth” plays out like a playful cross of the Move and a street-wandering chanson (it’s that accordion, you see), its message the simple but too-often lost idea that the failure to carry the childhood frolic of imaginative play into our adult lives has lasting consequences. As a theme it may seem odd grist for a pop song but Davison in fact not only doesn’t steer safely clear of such but rather appears compelled toward them, his vulnerable welded to his analytical through intricate pop trope structures and verging-on-verbose lyrical flights whose eloquence outstrips any such concern, revealing, as they do, the beating human heart within.

Thus, with impressive elasticity, Davison touches on dissociative thought disorders (the surprisingly bright XTC-leaning “Heaven Bound”), the plight and pain and stinging irony of being lonely and disoriented in the midst of a crowd (the warm pop rush of “Can You Imagine?”), the hallucinatory flash and confusion of imagery sparked by migraines (the nimble popsike tumble of “Auras”). And while not every track delves into the emotional heavies – album highlight (or not; mileage may vary as they say) “Shadow on a Tall Tree” lifts on a buoyant air, its more-or-less chorus all bold guitar strokes and shiver-inducing uplift while “The Spoken Word,” brushed with organ, lightly parped with trumpet, gives off a soft complicated light that will appeal to any writer anywhere – the overriding impression here is of an artist doing what they must to address the clamor in their head (something that, if we’re honest, we all contend with to varying degrees) in the, well, most necessarily artful way possible which, in turn, is a happy consequent for those that hear The Book of Strongman should they seek it out (you should, if we haven’t made that clear) or stumble upon it.

And therein, perhaps, the irony: a record that, in ways both oblique and direct, shies not away from confronting the complex challenges that need be faced lest we go mad while simultaneously capable, by craft and hook, of leaving a big broad grin on its listener’s face. Quite the trick, quite well done. [get the digital here; CDs can be had here or on Amazon]