No matter whether he’s playing guitar with indie rock legends Poster Children or bass with the loose, eclectic, and catchy Bully Pulpit, Jim Valentin is one of the most creative players in contemporary music. He brings passion, innovation, and originality to seemingly whatever instrument that he decides to play.

Classic Poster Children records like Tool of the Man, RTFM, and, especially, Junior Citizen benefited from his guitar playing, which went hand-in-glove with his brother Rick’s guitar and Rose Marshack’s bass. The trio formed the foundation of – to semi-quote Jim – a powerful, precise, and rhythmic sound that was excitement and love incarnate.

The quartet are primed to release the single “Neurotic Little Love Nest” and a video for the song (directed by Rick Valentin) on Tuesday, June 3. A full-on Bully Pulpit album – Bylaws – will follow on Tuesday, June 17. Both releases will come out on Lotuspool Records.

Jim was kind enough to take the time to talk to CITC about Poster Children and Bully Pulpit.

CITC: When and under what circumstances did you join Poster Children?

JV: It was early 1991. Rick called and asked if I wanted to come down to Champaign and jam with them. Rick and I had never played together before. It seemed to click immediately, and they asked me to join the band. My second show with them was opening for Soul Asylum at the University of Wisconsin-Milwaukee Student Union. It all happened very fast.

CITC: Poster Children’s sound was often described as “post-wave.” Do you agree with this assessment? If so, what about the band’s sound is “post-wave”?

JV: I think Rick coined that phrase. It was a tongue-in-cheek reference to post-punk, post-rock.

CITC: Did the band feel pressure in moving from Twin/Tone to Sire for the release of Tool of the Man in 1993?

JV: Not from the label. Maybe a little within the band in wanting to take full advantage of the situation. For the most part we kept doing what we always had done.

CITC: Did being on Sire affect the songwriting on Tool of the Man?

JV: I don’t think so. There was no feeling that we had to produce a “hit.”

CITC: Let’s switch gears and talk about Junior Citizen, which came out in 1995. What are your memories of recording at Smart Studios in Madison, Wisconsin? So many great records came out of that studio…

JV: We always liked playing in Madison. It seemed like a great place to spend a few weeks. The Tool of the Man sessions in New York were a bit too far from home, so we were looking to stay in the Midwest. I think there was some talk of recording with Butch Vig, but he was busy recording the first Garbage record. They were working on that upstairs, while we were downstairs. Smart Studios was a comfortable, small, and friendly place to record.

CITC: Was there a typical approach to the songwriting for Junior Citizen? I know that the band wrote the music and Rick wrote the lyrics…

JV: We would just jam, and things would evolve into parts then we would cut things down and arrange them.

CITC: Would you please describe the way in which your guitar sound and Rick’s guitar sound complement each other? Junior Citizen is an amazing guitar record!

JV: In a general sense, Rick’s guitar was more trebly, and I preferred a more low-mid mushy sound. I think I used my Gibson 335 mostly, which is a semi-hollow body and therefore warmer sounding. Smart had a great collection of amps, which was another reason for recording there. I remember using a 60s’ plexi Marshall 100W head a lot, but I probably ended up using my Hiwatt and Tube Driver pedal most of the time.

CITC: What songs, in retrospect, do you appreciate the most?

JV: “Revolution Year Zero” was always a favorite of mine, especially live. I don’t think we captured the energy on record though. I liked the lyrics. It was about the Situationist International, I believe.

“Drug I Need” stands out to me now, 20 years later. It sounds good on record.

“Wide Awake” holds up pretty well. I guess I gravitate to the prettier songs as I get older.

JV: I enjoyed recording RTFM. By that time, I felt I knew how to get guitar sounds I was happy with. I realized I had to forget about trying to capture my sound as if it were a live show. What sounds good on stage doesn’t necessarily sound good on record. We recorded that at Pogo Studios in Champaign, which was great. Bryce Goggin produced it and was fun to work with.

CITC: Were you ever in Poster Children and Bully Pulpit at the same time?

JV: Yes, pretty much the whole time. Bully Pulpit never played out much. It was a sporadic thing like a yearly reunion sometimes.

CITC: How does Bully Pulpit’s sound compare to that of Poster Children?

JV: Bully Pulpit is more eclectic and loose. Some of the earlier stuff we did in Kansas was written and recorded in less than a week. It was of the moment. Poster Children is more about power, rhythm, precision.

CITC: Why did you switch to bass when Bully Pulpit reconvened in 2005?

JV: I had played some basic bass parts on a few earlier Pulpit recordings and felt it would be better to focus on that area, since we already had two guitars. Maybe I was a bit bored with the guitar at the time and wanted to try something different. I never knew how much I would enjoy it.

CITC: Tell me about working with Rick on the forthcoming “Neurotic Little Love Nest” video.

JV: He always comes up with good ideas for videos. He works fast and is very thorough. We did all of the filming in one day. I helped out on the Blackout Dates video for “Epic Song” he did a few years ago. It was a full 12-hour day.

CITC: What can you say at this point about the video?

JV: It will be interactive with lots of “colour-separation overlay”! 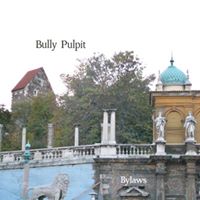 CITC: Does Bully Pulpit plan to promote Bylaws with any live shows?

JV: Yes, but probably only in Chicago and maybe Wisconsin.