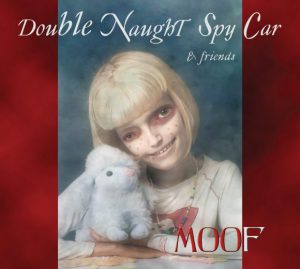 It’s rare these days to find an instrumental-only ‘rock’ band that isn’t esconsed in the echelons of post-rock or avant-noise or some other hybridized sub-genre that amount to a coded hyphenate for ‘mostly-often willfully-obscure.’ And whereas Double Naught Spy Car, by virtue of perhaps both their choice of name and their insistence to operate in a vocalist-free zone, are themselves hardly a household name, they really oughtn’t remain such, given the level of both musicianship and composition displayed on fifth album MOOF, released Sep. 8th on 11 Foot Pole Records.

Though it can’t be known for sure, that very disconnect between in-house talent and commensurate renown might have been an impetus behind inviting over a dozen of their more adventurous musician pals – among them Nels Cline, Mike Watt, and Sara Ardizzoni – to write and record, usually in single blast sessions, brand new instrumentals with them. Probably not though. Most likely these highly in-demand LA session players – Paul Lacques (Telecaster, steel guitar), Marcus Watkins (Strat, though only on one cut this time ’round), Mark Doten on bass and Joe Berardi drums – were just itching for the challenge of it all, but whichever the case, this is a great find.

Using as a guide their typical bewitching, mixed surface template – a kind of retro-futuristic, advanced jazz lounge vibe with exotic-but-grounded guitar motifs that tend most often toward rock’n’rolling surf exotica but aren’t shy about utilizing an occasional Middle Eastern modality or two – Spy Car takes their guests’ contributions and loads them deftly into that base. The result is a surprisingly un-patchwork whole, MOOF playing over its entirety like a fully integrated piece of work.

The Cline-infused “Tale of a Comet,” kicking things off, transforms midway from your standard Waikiki-in-space bar band trip to your standard Waikiki-in-space bar band with a dude stepping into the spotlight with chops drawn equally from the bristling dexterity of John McGlaughlin and Hendrix’s savagely precise abandon and from there the ride continues on its wild cavort, switching tempos and mixing moods with a brazen nonchalance. Saccharine Trust founder Joe Baiza brings a heavy/nimble angularity to “Hairsuit,” Continental Drifter Danny McGough a haunting nostalgic feel via organ work that conjures a James Bond retirement villa hugging (of course) a tropical beach, Ardizzoni a dreamy sharp wander through a decidedly complex place in the sun on “Jupiter Sunspot.” The three-hour Watts session, meanwhile, finds purchase on two separate tracks, the spiky jazz-rocky “Marginalia” that has something of East/West‘s droney intensity to it, and the more deliberative if just as inventive “Loose Cannons in Tight Quarters,” where the over-dubbed horns from The Atomic Sherpas (Vince Meghrouni and Carlos Alvarez) lend it the dead serious far-out playfulness of a Sun Ra outing.

Luminary contributors aside, though, the preponderance of heavy lifting here comes from the Double Naught Spy Car core, their work fusing the many variant strands into a vitally coherent whole never less than organically sly and inspired, though their greatest achievement on Moof may well be the trick of maintaining a material presence that is somehow both unobtrusively empathetic and an album highlight. Kudos. √√√¼ [buy Moof here] 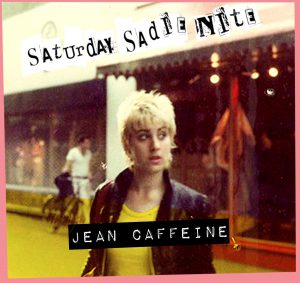 With a naked charm that engages via an unadorned honesty, the work on Sadie Saturday Nite presents its author Jean Caffeine as something of a visionary naif. Chronicling, in a series of patched-together anecdotes and impressionistic overviews of a certain time – primarily the late 70’s early 80’s punk scene in San Francisco – the album, unsurprisingly, plays as an audio scrapbook, the pages of which are crisped about the edges like a binder of punk show flyers stored beneath the bed for the last forty years. It was, in fact, one such flyer – this one advertising a Nuns and Crime show in 1977 SF (a not uncommon pairing at the time) – that turned Caffeine’s teenaged head on Broadway near the storied Mabuhay Gardens and did so quite decisively, making as it did the life-altering pivot (we all had them) from arena rock hegemony to that anarchic trajectory being experienced around the world at the time. From that point forward a certain retrospective inevitability takes hold with stints in London, back to San Francisco, off to New York and eventually landing in Austin where she still lives. The arc of this audio memoir, however, sticks to that initial booster stage, when the often chaotic rocket fuel abandon of pure punk energy blasted so many of us out of our natal torpor.

Varying in tempo and temperament – much like, y’know, real life – Sadie Saturday Nite veers from the deliberate, stage-setting rocker that welcomes us (“Neon Adventure”) to the outright punk-imbued (the “Pretty Vacant”-quoting “Winter of Hate, “(Mad as Hell in the) White Night”‘s Heartbreakers churn and angst – an appropriate context for the Dan White travesty – and a cover of the Zeros’ “Wimps,” coruscating and timeless), to the gentle and at times downright sweet (“Diamond Heights,” the lovely “Blue Haired Boy”), to, even, the endearingly hokey (the title track with the buddingness of sneaky teen rebellion set to the unlikely lurch of a waltz). It’s a diversity that suits, allowing for a nuance and intimacy that a full-out snarling three-chorded assault likely would have crushed. While it’s tempting to assume that said mix of styles derived from the one-woman one-guitar stage show that preceded it, the fact is the project grew its more fluent wings the further it evolved toward its current audio form, a development that points not only to the fearless instincts of the artist and her process but, more providentially for our purposes here, made for a delightful, singular album. While it’s not essential to have been there during that time in order to appreciate Sadie Saturday Nite, it certainly, for this writer anyway, can’t help but enhance its quirky, personable impact. √√√ [nab yourself some Sadie Saturday Nite in all forms here] 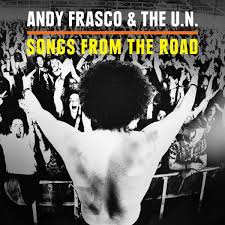 Few years ago I had the pleasure of reviewing a freshly-reissued live album from the seemingly eternal 15 60 75 (AKA The Numbers Band), the Akron-Kent local legends that, in those raucous early days, proved an incubator testing ground for more than a few of that areas future renowns, producing out of its ranks eventual members of Devo, Tin Huey, the Waitresses and more. While remarkable in itself, the fact of it being something of a NEOhio farm team was easily overshadowed by the bar band fire and fury of the Numbers Band live, the Robert Kidney-fronted outfit delivering a straightforward passionate testimony to the power possible in uncomplicated rock’n’soul. As a live band they had, in short, the ‘it’ factor, possessing a quality in their performance that surpassed the eloquence of any conjured adjective no matter how engaging. Language, in the face of their particular stage energy, came up dry and empty. On Songs From the Road, Andy Frasco and the U.N. make clear they’ve discovered their own version of that inimitable, pure-hearted mojo, proving themselves at the very least rivals to the titans just-mentioned.

Recorded at a jazz and blues festival in the historic Bavarian village of Bamberg, Germany, Songs finds Mr Frasco and his 10-strong band blowing the place up with an unrelenting mix of ballsy rock’n’roll sass, brass as tight as the Famous Flames trousers, and a burning insatiable verve that makes no excuses for its retro, unreconstructed brawl of a sound and in fact wears it as a badge of the brashest honor that could possibly be attached to their vested reputation. A hustler from an early age – an apparently un-apocryphal story has it that, like an impresario version of Cameron Crowe, the guy wrangled a record exec job at the age of 13 and was touring the States with one of ‘his’ bands three years later – Andy Frasco has no qualms making deals with the devil because 1) he’s comfortable and confident regarding the odds, and 2) it is, after all, the great horned one that has the best songs.

For their part, the U.N. men behind him seems just as cognizant as their leader of carrying on a by-now mythic tradition born in the shithouse circuits of yore, where bands cut their teeth in overlit Elks Lodges, sweaty high school gymnasiums, and dives the size of a backwoods cabin. By this time they’ve paid those dues in full (plus interest) and are now intent on reaping their due via a kind of incandescent rowdiness, the power and glories of that heroic epoch upon which they draw made manifest every night they take the stage.

Breathless even at rest, the band blow through their set with a running outlaw’s energy, harnessing along the way the turbo-charged, horn-fueled charge of prime-time Southside Johnny (“C Boogie,” especially, but see as well the lustful punch of “Doin’ It”), the unbridled post-pub rock authority of Graham Parker & the Rumour at their Heat Treatment peak (“Tie You Up,” the tightly-coiled rave up “What More Can I Say”), the snakeskin kick of J Geils (“Mature as Fuck”), the pugnaciously partying pedal-to-the-metal attitude of AC/DC (pretty much everywhere throughout), and, not to be forgotten, the original breakneck template laid down by the Killer himself all those manic decades ago, an influence to which Mr Frasco would seem a natural heir.

While not shying away from making a statement relative to current affairs as perhaps the band name might imply – the night’s capper, an off-the-rails take on the incendiary “Killing in the Name” makes sure of that – the fact is the very existence of this act speaks an unvarnished, categorical truth: rock and roll can still deliver on everything it ever promised. √√√ [Songs From the Road available here] [feature photo by the inimitable Trish Tritz]