Scott Schaafsma, the founder Chicago power pop group Kerosene Stars, has been a fixture on the Midwest music scene for many years, playing bass in a myriad of bands until he decided to form his own band in the fall of 2010.

Stereo Embers Magazine: Hello Scott! It’s really great to speak with you again after our Adequacy.net interview a few months ago. You have so much going on these days and it feels like a follow-up chat is needed to find out the latest about Kerosene Stars. First off, how are you doing at the moment and how are preparations coming along for the upcoming release of A Million Little Trees, the second in a series of 3 EPs?

Scott Schaafsma: Hey- Thanks for having me back. We are in the midst of a worldwide promotion of the current EP (Burn the Evidence) as well as getting ready to release the newest EP (a million little trees). Every day I’m in the office shredding away at radio and press contacts from all over the globe, doing the graphic design work for the CDs, booking podcasts and other appearances to promote the release show, and just all-around insane amounts of work that I guess some folks have “labels and press people” doing for them.

SEM: Whew, sounds exhausting, but it sounds like it’s worth it! Burn The Evidence was the first EP you delivered in this series and it came out January 21st of this year. On it you run through a variety of styles, from pop-rock to Americana and more. Can we expect the same type of stylistic range on A Million Little Trees?

Schaafsma: A Million Little Trees is more of a pure pop sensibility-styled record. There are some interesting harmony parts weaved into these tunes and there’s a bit less growl overall. I guess if I had to pigeonhole us I’d say this time around it’s more of a Shins meets Decemberists-type record as opposed to the previous, which was more eclectic, yet with a core of 70’s-meets-90’s Brit rock.

SEM: Can you reveal some other details about your upcoming EP, like the meaning behind the title and some of the song subjects?

Schaafsma: The EP title is taken from the song of the same name. It’s an upbeat, California 60’s psych-styled pop tune – at least that’s what we were going for. Anyone out there that would like to weigh in on whether we’ve reached that mark, we’d love to hear the feedback!

As far as the other tunes go, I can tell you that the first track “Eleanor Dear” has a theme that is loosely based on that of a civil war soldier writing to his significant other from the battlefield. But I suspect that song will have many different interpretations from a variety of folks. I always want the listener to be wondering what the hell I was thinking when I wrote some of these lyrics in the hopes that they will take the time to listen to the songs a few times over and really dig in and digest what’s happening in an auditory sense. My songs are never just about a superficial obvious theme that’s easily accessible on first listens. These songs can take on many different meanings, and that’s my intent. 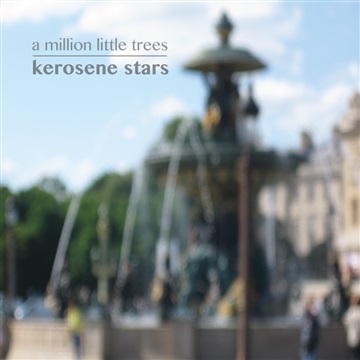 SEM: I had the chance to listen to the engaging EP-opener “Eleanor Dear” and I’m picking up an R.E.M.-like vibe from it. Did you have that band in mind when creating this tune?

Schaafsma: I wrote this song actually quite a few years ago, but shelved it and never played it for anyone until I started Kerosene Stars. The premise was to create something that would be vaguely reminiscent of something that Colin Meloy would write, and while I carved out the melody (and a record amount of lyrics), I did definitely think of Michael Stipe a bit along the way. Would you believe there are actually more verses to this song!?

SEM: Are you the sole songwriter in the band or do the other members contribute to the lyrics and/or song compositions?

Schaafsma: I have been pretty much the sole songwriter, yes. I say this with caution because every band member who plays with me has the artistic right to contribute parts in their own unique way. However Andy, our guitarist, has been a great contributor to both title tracks from these two EPs lyrically, as well as with some excellent melodic guitar work. But 99% of the lyrics and melodies came directly from my head, usually in my sleep.

SEM: You had previously said that the run of three EPs was originally meant to be one album and that you split it up due to the short-term attention span of a music-listening public who wants new things fast and now. Is the EP format proving to be a good method of distribution for you?

Schaafsma: A resounding yes! Although I almost wish I had done singles, I think that these EPs are getting a decent amount of respect from all over the world. I’ve gotten such a positive response from the Burn the Evidence EP that, even though it’s hard to keep up, at last count I believe we have over 100 stations/podcasts/internet radio stations playing these tunes in regular rotation. And we’re not just in the US; this vast majority is in England, Scotland, Ireland, France, Spain, and parts of Scandinavia. We’re also being featured this year on the Ice Cream Man Records power pop mixtape (Gothenburg, Sweden) that comes out in June this year. And what’s also great about these internet radio and podcast shows is that they don’t just get uploaded and forgotten. There are FM radio stations all over that rebroadcast these shows for all to hear, and they still seem to have a high download rate on the net.

SEM: So radio play has been very important in the coverage of Kerosene Stars. Do you have to submit your music to radio stations in the hopes that they pick it up or does it happen by chance?

Schaafsma: In relation to the above question, yes. I do all the promotions myself and so it’s a very time-consuming process. I’m not just spamming random email accounts in the hopes that someone will take the time to download and listen to us. I’m actively seeking out genre-specific presenters as well as journalists on local/national/international/ levels and tailoring my messages to each of them in the hopes that they will take enough interest and give the songs a shot. To date, I’ve sent out over 300 messages with a response rate of something like 80%. We’ve gotten a really great response in the UK with regular rotation in the London, Manchester, and Edinburgh areas. We’ve even been invited by the stations to come play a live segment, so now I’m attempting to figure out how to book my first DIY UK tour – not an easy task!

SEM: The release party for A Million Little Trees is May 12th at Schubas in Chicago. What draws you to and/or keeps you in this specific metropolis?

Schaafsma: I moved to Chicago with my first band with the only goal of having success in the music business. As long as I continue to live in Chicago that goal will not change. Along the way I’ve been everything from a hired gun bassist to a singer-songwriter to guitar teacher to just about anything to make ends meet. What keeps me in Chicago is that it’s the most accessible and affordable option in the country in order to reap the most opportunities and still have a roof over your head. It’s also centrally-located with decent transportation options that allows easy access to the surrounding Midwest cities for touring, or flying to further off places… It also helps that I’m originally from Grand Rapids, MI, so it’s nice to be able to easily visit there as needed.

SEM: You’re also finishing up a music video for “Talk Talk” from Burn The Evidence. How is that shaping up and when will it be available for viewing?

Schaafsma: The music video is turning out really great! It’s a part-animation, part-live-action hybrid. The live-action side of production wrapped shooting over the weekend of April 1st. The animation process will take a little more time, so our expected date of completion is the first week of June. As far as viewing goes, we plan to release the video online after its live release at a multi-media arts showcase which is likely to take place July 30th. We’ll be launching a Kickstarter campaign pretty soon for the event, and part of the proceeds will go toward paying back the production costs of the video. You’ll be able to purchase tickets when we launch the campaign or at the door on the day of the event, so follow us on Facebook and Twitter to stay up to date!

SEM: Is there any news about your 3rd EP that you can divulge?

Schaafsma: Ep #3 – Well… It’s tentatively titled by the lake and will feature some really interesting instrumentation of an experimental nature. I suppose that it will be perceived as perhaps our darkest release to date with a bit of an Echo & The Bunnymen / the Cure vibe. And that’s all I can really divulge at this time.

SEM: Sounds really interesting! Can’t wait to hear that. Can you please list your official site(s) where we can find out more about you and your music?

Schaafsma: Sure! Please hit our main website and join our email list as we’ll be giving some tickets and other stuff away this summer.