Rick Valentin has been one of the most creative and dynamic forces in contemporary music for well over two decades. As lead singer, lyricist, and guitarist for the seminal indie rock band Poster Children, Valentin has made some of the most pivotal, infectious, and stylistically diverse guitar rock in recent memory.

Poster Children records such as Daisychain Reaction, Tool of the Man, Junior Citizen, RTFM, New World Record, and No More Songs About Sleep and Fire are chock full of sweet melodies, pop hooks, truly innovative guitar playing, and other sonic surprises. They live and breathe love and excitement, as the songs featured below – “Junior Citizen,” “He’s My Star,” and “This Town Needs a Fire” – amply attest.

In addition, TDM is a multimedia project, featuring interactive videos and other original ideas, which you can experience at Valentin’s website for the project.

CITC was grateful to sit down with Valentin for an in-depth discussion of Poster Children, Junior Citizen on its “near-20th” anniversary, TDM and its Forget EP, his work as a video director, and what we can expect from his upcoming video for Bully Pulpit’s “Neurotic Little Love Nest,” the first single from their forthcoming Bylaws LP.

CITC: Why did Poster Children decide to record 1995’s Junior Citizen at Smart Studios in Madison, Wisconsin? It’s such a legendary studio…

RV: We had recorded our previous record (Tool of the Man) at a studio in upstate New York and felt really isolated, so we wanted to stay in the Midwest for Junior Citizen. Smart was just far enough away from home so we weren’t distracted by our everyday lives, but it still felt comfortable. Madison is also a great town. It’s a perfect size, and the food is wonderful!

CITC: Any special memories about recording there?

RV: I had read that when The Clash were in the studio, they would build a bunker out of guitar cases as a kind of clubhouse, so we set up a tent in one of the side rooms that only the band was allowed in. We could listen to music, hang out, write lyrics, take naps, etc.

We had our computer set up along with us in the studio, and I remember watching Rose as she developed the “space boy” for the cover art. She was refining it and refining it, but something wasn’t quite right – the moment she added the pinwheels for eyes was priceless – we both started laughing and said, “That’s it!” 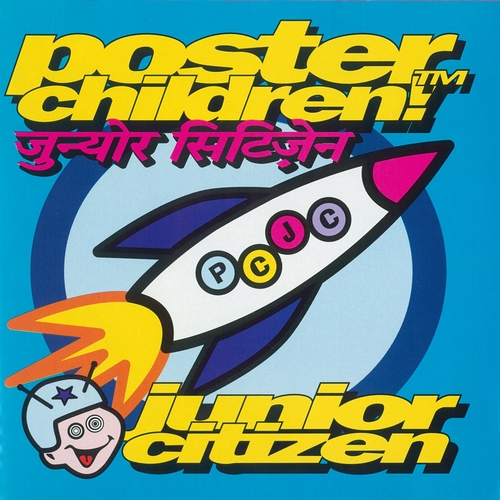 CITC: What did producer Brian Anderson and mixer Bryce Goggin contribute to the band’s sound?

RV: We’ve always had producer/engineers working on our records, not the classic Phil Spector type of producer who rewrites and rearranges the songs, but the type of producer who has the technical chops to translate the band’s live sound into recorded sound. So that was Brian’s role – trying to capture the live energy of our shows in the alien world of the studio.

We had spent six weeks making the record, and when we tried to mix it, everyone was so completely burnt out, nothing was gelling. Bryce was able to come in with an outside perspective and figure out where to put all the guitars we had recorded into the mix (and knew which parts to leave out!).

CITC: Poster Children’s lineup really solidified on Junior Citizen, with you on vocals and guitar, Rose on bass and vocals, Jim on guitar, and Howie on drums. How did Howie become your drummer for the album and all your records up to DDD in 2000?

RV: After Johnny left the band, we had open tryouts and must have played with 10 or 12 drummers. Howie was the one who was able to come up with parts for whatever we threw at him.

CITC: How did his style complement what the rest of you were doing on Junior Citizen?

CITC: Jim’s first record with Poster Children was 1993’s Tool of the Man. Why was Jim and his guitar sound right for band?

RV: It was a tumultuous time for the band. We had gone through a lot of member changes in just a year or so and had gone from being a three-piece to a four-piece and back to a three-piece, and I wasn’t able to keep up as the sole guitarist- the songs sounded empty. There are two important factors to consider when adding a new member to your band – can they play and can you live with them in a van for months at a time? We knew we got along with Jim and when we tried him out with the band, the band felt complete. It was similar to the Howie tryout, he was able to come up with parts for whatever we threw at him.

CITC: In general, how did you guys develop your guitar parts for Junior Citizen? It’s one of the best guitar records of the 1990s… Please talk about the title track, “Wide Awake,” “King for a Day,” and “New Boyfriend”?

RV: We did all the writing for the record as a band in our rehearsal space. I don’t think there was ever a moment when Jim and I worked on our parts without Rose and Howie. From what I remember, we would “jam” every day and build up our parts organically and slowly a song structure would form.

“Junior Citizen” and “King for a Day” sound like the kind of songs that would start from the bass and/or drums, and Jim and I would add stuff on top whereas “Wide Awake” and “New Boyfriend” sound to me like songs that started from guitar riffs. But the fact is that a lot of these songs sort of “spontaneously combusted.” Jim, Rose, and I had been playing together for a while and instinctively knew how to fill out our own “territory” in each song, and Howie was able to jump right in and find his place. Someone would just start playing something and we would all join in.

CITC: I’ve read that the band composed the music and you wrote the words. I assume that you wrote the vocal melodies as well. How did you derive such beautiful melodies from the music on songs like “He’s My Star,” “Drug I Need,” and “One of Us”?

RV: For most of the band’s history that was the way we wrote, the music was first and then I figured out a melody and words that fit with the music. I don’t think I’ve ever written a melody first and then written music around it. The word “derive” is a good one. The melodies just come automatically from the music. It’s like a jigsaw puzzle – I sing what fits into the space that’s left for vocals.

CITC: What songs from Junior Citizen do you think hold up the best after almost 20 years? Why?

RV: “He’s My Star” is the song that seems to have the most resonance with people. I like it because it’s the same chords over and over again, but somehow it’s not completely boring. It’s one of the few Poster Children songs I go back and listen to because I like the way the vocals turned out and I’m always trying to figure out how to recapture that sound.

CITC: Let’s skip ahead to your latest project, Thoughts Detecting Machines. How would you describe the Forget EP?

RV: In an odd way it’s similar to “He’s My Star” in that a lot of the songs are one riff or chord pattern over and over again with various elements pulled in or out. I’ve always liked that kind of “raga” style of song and am still trying to perfect it. Basically, it’s a mix of Poster Children and Salaryman – one part indie rock plus one part electronic rock. 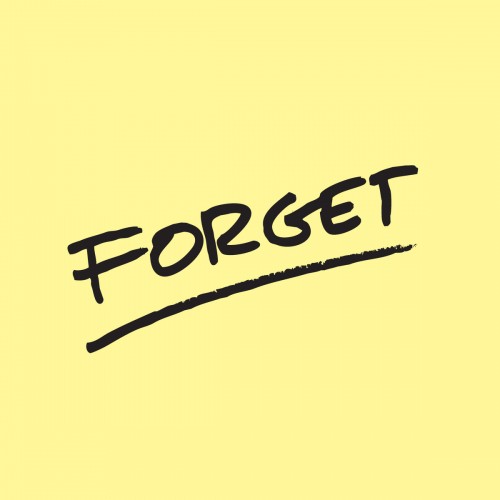 CITC: Please tell me about the EP opener, “Down to One.” When you composed it, what came first, the electronics or the looped guitars?

RV: The electronics were first. The beepy drum machine loop is something I made years ago and was always trying to use in whatever band I was in at the time but it never quite worked out. Once I started working on music by myself, it really fit well into the more electronic-y loop-y stuff I was doing.

CITC:  Does working with electronics impact your approach to vocal melody? If so, how?

RV: I don’t think it affects my approach to vocal melody at all. I’m still in the same boat as always. I’ve got a bunch of music that I have to add melodies and words on top of – I just don’t have three other people helping me out with the music. That’s the big difference for me with TDM. I have no one else to blame if things go completely off the rails!

CITC: “Code to Me” sounds the most like a traditional rock song, mainly because of the percussion. What can you say about how the percussion was created for this track?

RV: That song started out with the synth bass arpeggio, and what I often do to create a percussion part is set up a drum machine and play some simple rhythms then run it all through a delay to make the rhythms more complex and “mushy.” It is strange. That song is as “electronic” in terms of construction as the other songs, but I agree it sounds more like a traditional rock song than the others.

CITC: “In Grey” has a strong David Bowie vibe. It sounds a tad like Low and a tad like “Under Pressure.” Was Bowie an inspiration for the song?

CITC: How do you perform live as Thoughts Detecting Machines?

RV: The video for “Going Home” is a good illustration of my live set. A microphone and guitar plugged into a laptop which is plugged into a set of speakers. Each song has a looped electronic sequence I control and I build up layers of vocals and guitars in real time over the sequence. It’s a hybrid of a live DJ/electronic performance and a solo guitar performance.

CITC: What makes the amazing and creative video for “Going Home” interactive?

RV: The “Going Home” video has the most basic of interactivity – which is the viewer can click on the video and change what scenes they are watching. I’ve made a commitment to myself that every video I make from now on has to have at least some element that is controlled by the viewer.

CITC: Speaking of videos, any hint at what you have planned for Bully Pulpit’s “Neurotic Little Love Nest”?

RV: It’s going to be “clickable,” and there are going to be things flying around and it is reminiscent of “The Song Remains the Same.”

CITC: What other videos have you directed? Any Poster Children stuff?

RV: I directed the PC videos that we made after Junior Citizen, did all of the live video for Salaryman, directed the “Zero Stars” DVD, and made a video for the late, great Blackout Dates.