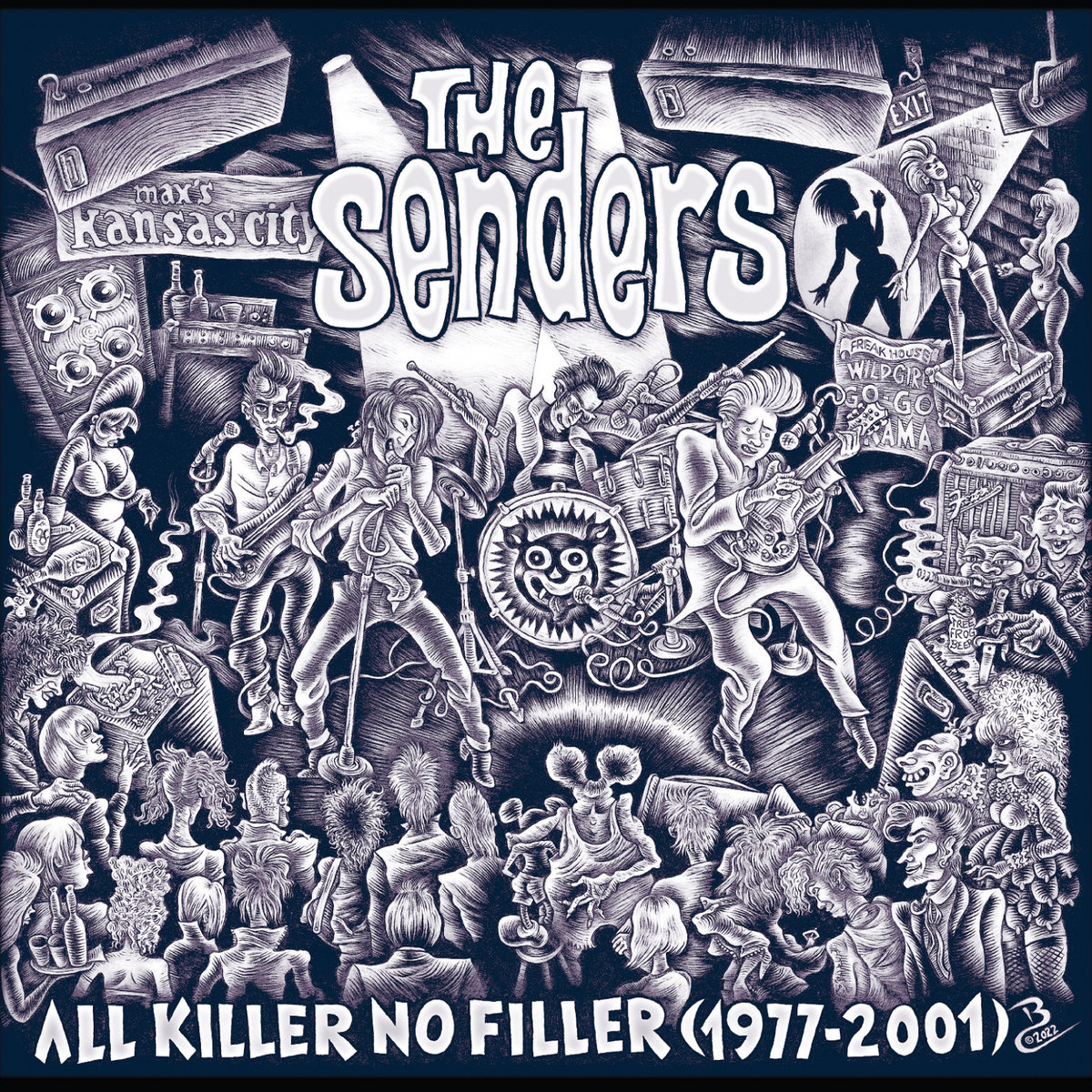 This just might become a newly-minted tradition. It’s New Years Day morning, the dog’s barking at phantoms only he can see or sense, it’s foggy out, Oregon in all its chronic monochrome splendor, and I never did get around to raking those fucking leaves out back. All in all it’s lame, it’s mundane, and it’s beautiful, which by my lights can only mean one thing: it’s punk rock time, and very fortunate for all concerned I have two recent pieces of NYC punk scene history, both released in late November by Left For Dead, sitting in front of me, one of them just a single, the other a full-out retrospective, both of them more than eager to churn themselves into your heart.

First let’s start with The Senders very appropriately titled All Killer No Filler (1977-2001), spewing forth with an indefatigable, adrenalized punk rock classicism that, despite that phrase’s oxymoronic liability, comes at you with such a timeless charm and purpose you’ll hardly give a shit about rhetorical finesse. After spending one-hundred thirty-one of your precious minutes with this, well, killer double disc, from the catchy impassioned perk of “Devil Shootin’ Dice” to the Eddie and the Hot Rods-do-Chuck Berry “For Me Tonight” that caps a seven-song live set (in the company, btw, of one Johnny Thunders), you will be upfront at Max’s, you will be whizzed out on speed the next day in the Bowery, you will be ecstatic and sense yourself eternal as you wander about in ripped-up jeans feeling finally understood even as you reel inside from your first early episode of tinnitus. This, in other words, is the stuff.

Culled from a full quarter-century that spanned from the none-more-American year of 1976 to a tick beyond the new millennium (2001, the beginning of the end of history? Possibly, but that’s a theory for another time), disc one jumps from hither to yon, the earliest the blues-riffed rock-a-rama “The Living End” from 1977, the most recent a live romp through the Stones’ “Empty Heart” recorded in 2001 that ends disc one and features no less than Wayne Kramer (we should note here that “Empty Heart” is one of the bonus tracks available on the 2-CD version but not the double LP set). Between the two, through a head-spinning variety of line-ups anchored almost throughout by singer/primary songwriter Phil Marcade and guitar slinger Wild Bill Thompson (joining in ’78), a raucous selection of hells are broken loose and spilled upon succeeding generations of punk rock fanatics clustered in NYC and beyond.

From “No More Foolin’ Me”‘s frenetic precision that would’ve made those lads from Canvey Island break into a hot sweat through a searing rendition of the Wynn Stewart-penned  “One Cup of Coffee and a Cigarette,” the punk serenade “When I Die I’ll Be A Ghost,” a simply ripping take on Willie Dixon’s “Do the Do” and several tracks recorded live which, not surprisingly, truly showcase the band’s tendency to blow the roof off the mutha, the first of these two discs might suggest taking a brief breather before sliding the second into position and hitting ‘play.’ But once you do…

…hold on. To something, to someone, to anything. The Seven Song Super Single was a 12″ recorded and released for owner Tommy Dean’s Max’s Kansas City Records in 1980 after Dean had decided that his already renowned punk outpost could do with a record label, enlisting producer Peter Crowley to get it together. Crowley booked studio time for four bands and got to work. When it was the Senders’ turn they arrived with both a Marcade-designed record cover and a bundle of nerves, having never been involved in a recording session before. Noting this, Crowley advised them to just play their set through a few times to get loose, telling the lads ‘We won’t record you’ which of course he did. The results are, quite literally, breathtaking. “6th Street,” one of that set’s only two Marcade originals, burns along in exactly the fashion your dreams tell you the rawest rockabilly trailblazers must’ve sounded in some Mississippi liquor shack in 1956, “The Killing Floor” takes Howlin’ Wolf’s original and tightens it until the rivets pop off, Thompson’s guitar sounding in certain danger of catching fire, the two Chuck Willis cuts – “Cut It Out” and “I Feel So Bad” – seem intent on raising the tragic enigma himself from his early grave and inducing him to dance across the studio floor, his turban unrolling in utter abandon and anyway you get the idea. This stuff ain’t nuthin the faint of heart should consider messin’ with. Tack on to this another seven-song, three-alarm blaze recorded live at, where else, Max’s, with the aforementioned Mr Thunders along for one of those rides where the wheels are constantly threatening to come off but by some kinetic miracle never do – one suspects to the point of certainty that this wasn’t an unusual impression – and you’re in possession of one of punk rock’n’roll’s most essential documents. If it’s a certain manic, visceral magic you’re in search of, this collection will, indeed, send you.

Second, and of at least equal historic value, we turn to the at-last reissue of the legendary 1981 single “Drive My Car” by then-teenage phenoms Nastyfacts. Incendiary, take-no-prisoners and brash as fuck, there is little – scratch that; NO – mystery as to why the original 7″ artifact has over the years become one of the most sought-after slices of vinyl on the list of nearly every member of the punk rock collector cognescenti (depending on which version you want – large hole or small – those Jimboco label releases will ding you anwhere from two-hundred to fifteen-hundred bones). While the music speaks indelibly for itself and we’ll get to that momentarily, it’s the ‘who’ of this band as much as the ‘what’ that merits a column inch or two.

A four-piece that gelled together while attending St Ann’s School in Brooklyn, they were fronted – and keep in mind, we’re talking late-70s America here  – by a bass-playing singer that was an 18-year-old Queer person of color named Cherl Boyze, while the other three – Brad Craig and Jeff “Range” Tischler on guitars with drummer Genji “Searizak” Siraisi – were by appearance barely old enough to legally operate a motor vehicle. With much practice and that never-failing engine of, well, adolescent drive, the band built a following in Manhattan thanks to amateur nights at CBGB’s and other all-age venues that eventually led them to landing regular slots at Max’s. Though the punk movement in those wonderfully volatile early years was quite naturally awash in the spit and spirit of youth and the almost genetic tendency toward rebellion that comes with it, this writer can assure you from his own time during those same years in the Bay Area that it was very rare to see – or even hear about – a band of any consequence whose majority of members were just past puberty. That novelty factor aside, however, the story here at its core is Boyse.

Whereas the punk scene in its nascent form, ie prior to the fascist faction storming the gates with their zieg heil bullshit, was, as any new youth movement is, fairly accepting of those outside the norm (which, by definition of course, punk’s primary demographic already was) there still remained a normative, sometimes reactionary streak reflective of the culture and times from which it rose. Which is to say that, as a punk, everyone was a freak but still mostly white and predominantly straight. Yet tucked inside that previous statement is the plain fact that declaring one’s punkitude by walking through school or the mall or whatever cultural milieu wearing outlandish kecks with all your hair shaved save for the spiked orange mohawk didn’t exactly lack in courage. Whatever else can be said about punk – and there’s plenty, most of it said – to become one of its number was to put yourself out there in a committed fashion (being a ‘weekend punk’ wasn’t much of an option, compromising as it was, but some had little choice.) In that context the rarity of Boyze’s makeup makes more sense but was, nonetheless, still a notable exception, even more so, perhaps, than that of Poly Styrene which is saying something. All that, um, said, were it not for the quality of the material as evidenced by this – almost tragically – scant, all-there-is example you’d not be reading this and allow us to add that should you value your punk history this is an unmissable part of it.

Breaking forth with a fierce abandon that’s at once leavened by Boyze’s remarkable first line (“I’m not really as strong as I look“) sung with utter conviction against a buzzsaw level of punk rock precision, punctuated at its break by a perfectly concise-but-explosive pop-punk guitar solo that hurls itself headlong int a car-crash sound effect, this is breathlessness defined, impetuous impatient and as invitingly in-your-face as you could ask for but never for one split second sloppy or ill-defined. It’s a track that knows what it’s doing from a band that can decidedly claim the same, an assessment confirmed by the B-side’s two quick stabs of era-defining pogo-worthy bliss (“Gotta Get to You” and “Crazy ‘Bout You”) that suggest the peerless irrepressibility of the early Undertones had they been from Brooklyn not Derry and had as their singer an equally peerless frontwoman that brought the grit of lived late 70s New York experience to the microphone, even as the thematic content in terms of typical teenage kicks was essentially the same. Get this while you can, you really don’t wanna miss out.

[try your luck at ordering either or both here]