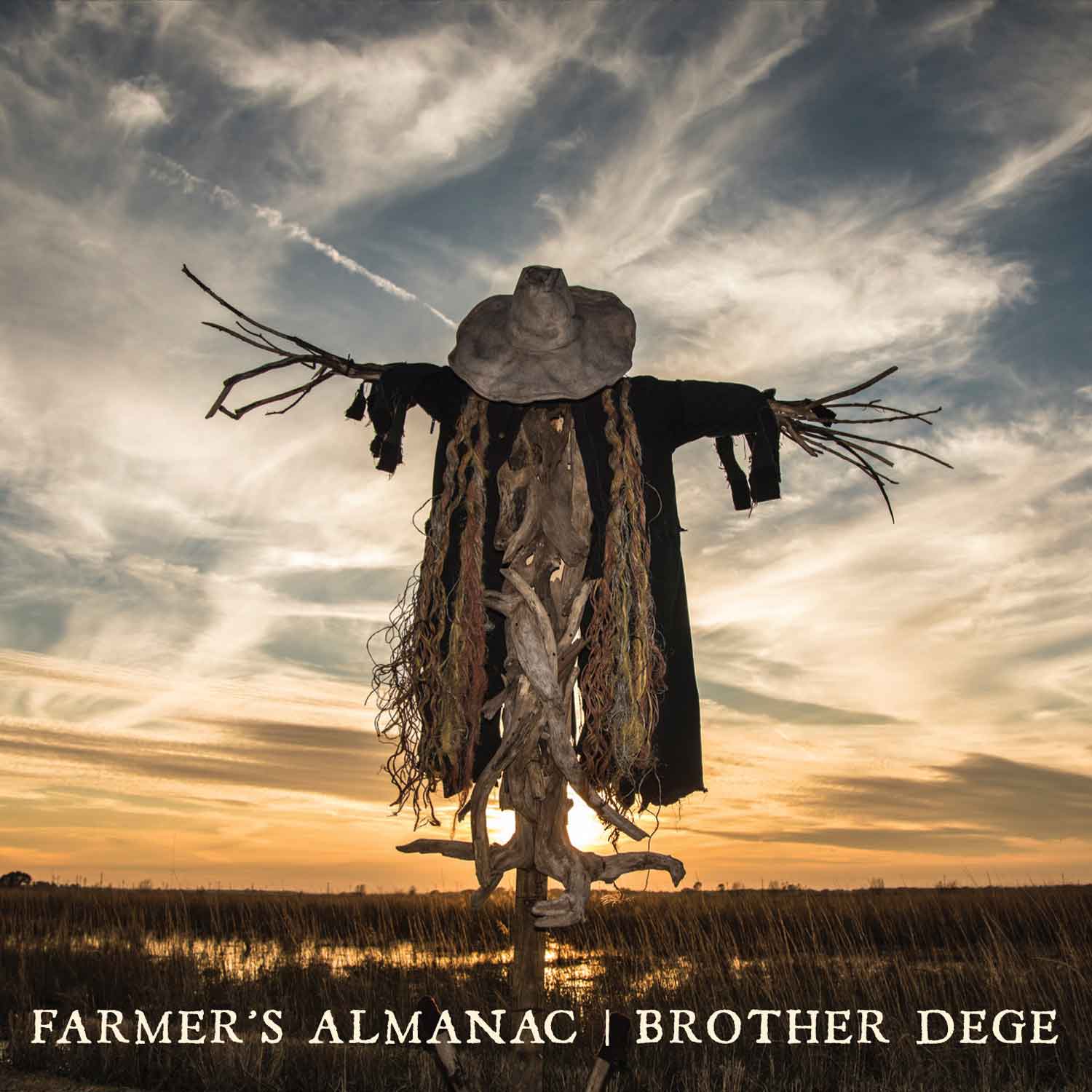 Hey, I gotta say, this Dege Legg, DBA as Brother Dege, is a true hoodoo dude though one who is certainly in no need of being credentialed by this pallid Oregon chance having had bona fides a-plenty bestowed on him from multiple sources, not least by a certain Mr Q Tarantino who handpicked the good brother to help soundtrack his movie of this century, Django Unchained. And while choosing to eschew my normal refrain of (in various iterations) ‘Where the hell have I been?,’ the plaint, even unstated, smacks here with as much force as ever. Not only is the material on Farmer’s Almanac blessed with an inordinate consistency of strength and a vigorous home-baked artistry, it’s also – besides being loosely strung together as a concept album – his fourth album since his 2010 debut Folk Songs of the American Longhair (itself appearing after his band Santeria’s 10-year run) became an instant standard-bearer for this type of blues-injected, swampified country rock, a genre out of which Mr Legg seems able to spin rock Faulknerian tales as if it’s but a reflex of effortless voodoo.

A genuine N’Awlins son of the po’boy South with a healthy affliction of Muscle Shoals Syndrome runnin’ through his blood, Brother Dege Legg, often under the influence of little more than deftly picked, pick-up’d acoustics and resonators – to which slides are frequently applied – seems to have solidly placed himself, after much tribulation of life – a restless depression occasioned by the creative impoverishment of his surroundings, subsequent attempts at remedy via drug binges and the like, the inevitable arrests therefrom – as a person of deserved reputation in the none-deeper, none-richer line of succession that that part of the country has uniquely bred (in my mind I’m seeing a Flannery O’Connor character lured forevermore into a roadside juke joint but you will most surely have your own visions listening to this particular almanac). In the sweet bitter, somewhat humid sound that comes echoing down the winding tributaries of this record, you might detect traces of the Arthurs Alexander and Conley hanging in the shadows with Bobby Charles. recent memories of the Robinson brothers and a couple of Drive-By Truckers might stir to life, and you will certainly, in Legg’s string work, catch a strong current of Duane’s dobro spirituality. In character, then, more Georgian than Cajun, more Macon than the Big Easy, such nit-picky distinctions melt to nothing in the face of the universal vibe that, if you’ll pardon my saying, swamps this record.

While every track on Farmer’s Almanac is worth of it own dedicated recap – the passionate worldly blues of “The Ballad of Ingo Swann,” “Bastard’s Blues” that sounds like Ry Cooder wrapped up in a writhe of black snakes, the breathless hot-lick drive of “Country Come to Town” (and I could have safely chosen any other three) – we’re going to instead zero in on the quietly epic “The Moon & the Scarecrow,” from which it could reasonably be asserted all the others on here are related by birth or adoption or shaky marriage, spokes of the same spooked wheel, as it were, and in fact the track is indeed placed at the album’s hub, its middle track, five on either side.

A hopeful elegy of a fractured heart, “The Moon & the Scarecrow” is filled with fevered impressionistic lyrics that in their sparse eloquence would seem to be doing double-time as a kind of vision-distilled autobiography, one written with a switchblade on a fallen tree, raised in the telling to the level of God’s own poetry by virtue of the elliptical honesty and pure hurt within. Presented inside a structure of subdued intensity, experimental in its way – two-thirds of the way through its 7+minute running time the song, in a sense, pauses into eruption – it not only never wanders off course but keeps strict, devotional focus on its goal, its elusively glowing target: absolution. Not as a means necessarily of sins forgiven but rather accepted, brought into the fold of a love undiminished in pursuit of that simplest, most inscrutable thing, understanding. Of self, yes, but just as much that oddly unknowable entity’s place inside the whole cross-wired schematica we find ourselves forced to make sense of. As existential gambits go it works on a number of beautifully conflicted levels, willfully intuitive but in its whole supremely grounded, as calm as it is feral, its scope terse yet sprawling. The instrumentation overall is a down-home stately, delicate, a restraint that in the end seethes with life.

Historically, there is possibly no notion that gains greater currency or purchase in the psyche of the Southern artistic mind than redemption. On this lucid, febrile album, that quality doesn’t seem so much sought as assumed, and yet its presence hardly matters once the accounts have all been totted up and settled. The tensions and ecstasy of living, all those fucking sorrows and whatever levels of happy we’ve managed to grab, all said and done it’s just noise and fury hurled into the void. The balance is the balance, and there it is, and Brother Dege, there’s little doubt, has got that nugget of candid fatalism dialed here on Farmer’s Almanac. Which means, ultimately, that this is just another album offering its truths into the immeasurable, exuberant maw of existence, for better or worse. It just happens to be a very good one.