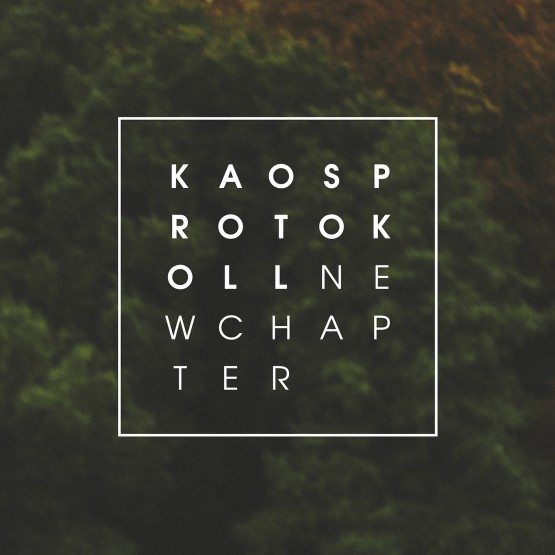 A few weeks back, the Swiss jazz provocateurs known as Kaos Protokoll released an EP that was simply titled New Chapter. It came at the right time, as it radiates a mellow vibe that encapsulates the long-awaited spring (not the season itself, so much as the sunshine it should be delivering, but has withheld for so long in certain parts of the world).

This new material from Kaos Protokoll sounds like a rebirth for this outfit, not only compositionally, but also emotionally. The music isn’t spiky or full of irony like their previous releases. It feels somehow more self-aware; more honest and definitely less guarded.

As a listener, when you experience the unfurling of the music, you may find yourself bearing witness to a transformation of sorts. You may hear a band discovering that what previously might have been the limit of their emotional expression has now become the springboard for a whole new sonic dimension.

It’s a beautiful thing to hear and understand – and it’s also something that bodes well for this project that may have found its starting point to ever-expanding expression. And this has happened with the sound of a calm, breathy saxophone at its core…

Band leader and main songwriter Benedikt Wieland took some time out of his busy schedule to sit down for this short, but detailed conversation.

Stereo Embers Magazine: Hello Benedikt! Are you a Coltrane fan by any chance?

Benedikt Wieland: When you start playing jazz, there is no way to get past him. His influence and influence on the entire jazz idiom is unquestionable.  There are so many records from the jazz canon that had really inspired me, but A Love Supreme was definitely one of the biggest ones.

SEM: What do you think of Kamasi Washington and his basically opening the door to put jazz back in the mainstream spotlight?

BW: I saw him live in Berlin about two years ago, and I have to say that it was something absolutely new for me, to see a jazz concert in a club with the capacity of a thousand people or more! This was like a small pop concert. It was amazing to see that this music doesn’t have to be confined to niche clubs and that it has this ability to cross over. There are so many people out there who are scared of the word “jazz”, but I’m sure that many of them would enjoy the music if they would have the chance to see it live. Who cares about what you call it when the energy is so intense! And I guess Kamasi is proof of the fact that more people are opening up to this type of sound.

SEM: Do you think that it’s sustainable, this level of exposure?

BW: There were always artists like Kamasi who opened the door for jazz to cross over. Miles Davis, Herbie Hancock – they came from jazz, but they were making music with a much broader appeal. And nowadays you have GoGo Penguin or Sons of Kemet who are expanding into new markets and addressing completely new audiences. I guess that it’s really down to your definition of the actual word “jazz.” What is jazz anyway? I think that the younger musicians are much more open and tend to draw from so many different styles, so in a sense these genre definitions don’t apply the way they used to. These clear borders that we used to have that defined music styles, they’re not there anymore. Going back to Kamasi Washington, he released his record on Brainfeeder, which is Flying Lotus’ label, and what they release normally tends to be closer to the beat crowd and electronica, not what you would traditionally would think of as jazz.

SEM: Let’s talk about your latest release. Why did you title it New Chapter?

BW: The previous incarnation of Kaos Protokoll was a trio (bass, sax, drums) and back then we were more about punchy riffs and playing fast lines. The sound was meant to be very loud, and brash, and it was filled with irony and some melancholia. On the second album, we added more electronics and efx to our set-up, but it was still pretty much a similar musical direction to that from our debut. But after five years of playing like that, I just couldn’t imagine making another record with that sound. My music comes from an emotional space. I tend to think in pictures and then I compose based on those images. When I started working on new music, things also changed in the band. Our previous sax player left and was replaced by Simon Spiess, and then Luzius Schuler, who played keys, joined us. We became a quartet and the new members brought a new sound with them, so this was the beginning of a new chapter.

SEM: And this EP is just a prelude to a full record, correct?

BW: We actually wanted to release a full LP next week, but the whole production process, especially the post took longer than expected. Instead, we decided to fill this gap by releasing an EP. We’ll release the full-length in the autumn. It’ll be called Everybody Nowhere.

SEM: Can we expect more of this new-school spiritual-jazz-type territory that you’ve explored in the past on this EP?

BW: Of course! The record and the EP were being recorded at the same time. We just split the tracks between the two. Right now we’ve been doing shows to get to know each other some more, as a band and to polish our live sound. I think that this delay was actually really good for us, in that it gave us this extra time to prepare for the forthcoming tour in support of the release of Everybody Nowhere. Exciting times ahead!

Find out more about Kaos Protokoll