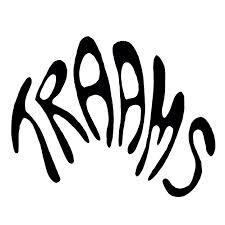 We here at CITC can’t quite figure it. In the last year, year and a half, enough bands have emerged sporting extraneous vowels in their names that it’s bordering on an epidemic. And it’s not as if they all know each other or are part of some movement or scene. One’s a garage (garaage?) psych band from Arkansas named Pagiins, two are Brooklyn-based, an indie band (DIIV) that has a taste for shoegaze and the atmospheric darkwave-ish band ERAAS, two take cues from different parts of the post-punk spectrum but are 6000 miles apart (L.A.’s Flaamingos – synthy and 8o’s-influenced – and TRAAMS from Chichester, West Sussex, who betray a “love of krautrock, Television, Pavement, Mclusky, even Abe Vigoda” as I wrote reviewing their debut), while the one from Athens, GA (Muuy Biien) is a thrashing, sharpened spike of a punk band when they’re not exploring ambient soundscapes, and no, I didn’t think I’d ever use ‘punk’ and ‘ambient’ in the same sentence either. However, as apparently random as this trend may be, there is one unifying characteristic to all of them: they’re all very good. Which leads to the notion that maybe they’re all on to something? Can’t prove it, but if you’re in a band that’s having some trouble gaining traction and finding its mojo, you might think about augmenting your name with an extra ‘i’ or an extra ‘u.’ Why not? With nothing to lose (and only one vowel to gain), it just might make the difference. Oh, and in case you think we’re making this up: