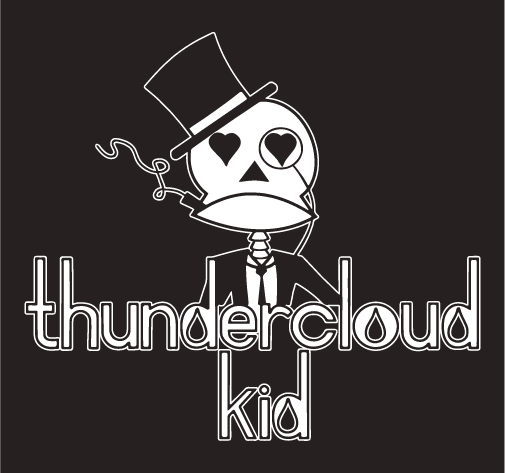 Buffalo’s Thundercloud Kid are one of the most dynamic, innovative and exciting acts around.

Led by the Caputi brothers (Sean and Brendan) and rounded out by Frank Zanti and Jim Ciambor, the band takes their musical cues from everyone from Fall Out Boy to My Morning Jacket.

Their new EP Songs About The Hopeless And Mourning is a poetic blast of melodic punk rock played with heart and nerve.

The EP is available for free right now and you can download it here:

I got a chance to sit down with Sean Caputi for a comprehensive chat about his band:

Stereo Embers: You feature a graphic novel on your site titled, “The Charmingly Odd and Oddly Charming Tales of the Thundercloud Kid,” which is certainly unique content for a rock band to feature. Chapter One: “And Then It Was Dark” mentions the emotional climate of citizens that wrestle between hope of industrial revival and institutionalized despair due to their inhabitation of a “rotting metropolis” whose nepotistic political class posed no meaningful solution as to how to resuscitate the economy once vital industries such as steel ground to a halt. These roles formerly provided meaningful employment for everyday workers as well as tremendous wealth for the captains of industry of yore. Tell me about this story…

Sean Caputi: The graphic novel series is thoroughly interwoven into the rest of the project; our music, videos, album art, lyrics, etc. all exist within the universe that we lay out in “The Charmingly Odd and Oddly Charming Tales of the Thundercloud Kid.” There is an entire world of characters and stories that we are telling through the books, but the focal point is our skeleton character McKinley – the Thundercloud Kid – who also serves as our logo. The story arc will total 14 books when it is finished, the second installment of which will be released in December, 2015. To be concise, the series follows McKinley’s perilous journey from Overcast City through the Mo(u)rning Lake region to rescue the kidnapped creature “Her.” The books are written in a style that kind of blends lyrics and prose, and the illustrations that accompany the text really bring everything to life.

SE: What prompted you to champion the revival of The Rust Belt which includes Buffalo, NY, Cleveland, OH, Pittsburgh, PA, and Detroit, MI?

SC: Well, we are from Buffalo, and have therefore always identified with underdogs and heartbreak. We have a ton of pride in our city and our Rust Belt neighbors, especially since much of the country often snickers in our direction, so for us, the truest setting for this project was naturally a down-on-its-luck, battered place like Overcast City. As the story progresses though, themes of heart and hope lighting up the dark become more apparent, which is exactly what is happening in Western New York right now, and is what we strongly believe in. There are actually a lot of Buffalo references in the series that most non-locals would probably miss.

SE: How does this story speak to the work you are trying to accomplish as artists?

SC: As artists, we are trying to share this immersive world that we created. We try to learn from series like Lord of the Rings, Harry Potter, Game of Thrones, Star Wars, etc. where a massive universe has been established and is essentially infinite in its potential content. That is the type of project that we are fascinated with, and with our added musical dimension, the world of Mo(u)rning Lake takes that concept a step further. There is so much more going on here than just some guys releasing rock and roll songs.

SE: What is the origin of the character McKinley’s look?

SC: I started developing this project in 2009 or so, and spent 4 years writing and drawing before bringing it to my brother and assembling the rest of the band in late 2013. McKinley just came out of my pen one day when I was writing lyrics and sketching in a notebook during class at the University at Buffalo. I really can’t explain it any better than that – I was just trying to embody the spirit of the project through a character, and there he was.

SE: How do the graphic arts support your message as a band?

SC: Graphic art is probably my favorite form of creation so it’s unfortunate that I’m such a hack. In high school, my career aptitude test results suggested that I should be a graphic designer, and I obsessively research logos and design news so that stuff really strikes a chord with me. In terms of Thundercloud Kid, all of us agree that graphics are crucial to illustrate this universe because although the music is obviously critical as well, it does not provide any actual visual media. This is as multi-media as a project can be, and we are very proud of the cohesiveness that we have achieved between each medium.

SE: What is the intent of your diary entries? Are they more for emotional catharsis or for personal expression?

SC: Every Monday, we post #LyricMonday on our social media sites, which consists of a photo of one of our lyrics written out in a notebook like a diary entry. Writing the lyrics themselves is absolutely cathartic for me, and the beauty is that through this project, we have been able to create something really cool and innovative from those thoughts and emotions. We love doing Lyric Monday because the response we get from our audience is enormous, and it feels as though we are all sharing the sentiment of the lyrics together because so many people seem to relate to them.

SE: How does the saying “once a cheater, always a cheater,” relate to your experiences?

SC: That’s actually kind of funny. We posted that quote a few weeks ago and I would love to tell you that it has some deep, emotional meaning behind it, but the truth is that it was commentary on a rival NFL franchise. I’m not going to name the team, but if you’ve been following the latest football news, you’ll probably know what we were referencing.