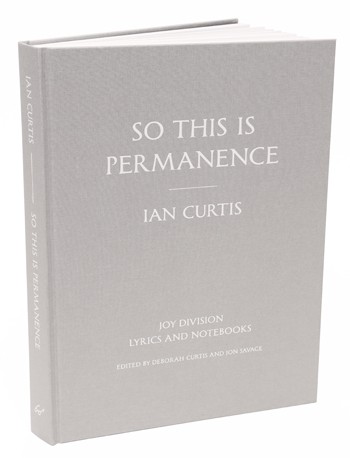 When I interviewed Peter Hook on a snowy day in Chicago in February 2013, he told me that when he had to learn Ian Curtis’ lyrics to perform Joy Division songs with The Light, he consulted the internet – and what he found there, he said, was “wrong” in many cases.

“Ian would never had said that,” Hooky claimed, referring to the lyrics that appeared at many sites.

After reading Ian’s So This Is Permanence: Joy Division Lyrics and Notebooks (Chronicle Books), which was edited by Ian’s widow Deborah and esteemed rock critic Jon Savage, I understand Hooky’s point about the lyrics scattered across the net.

Permanence is invaluable because it presents in one place Ian’s lyrics in a clear, readable, and definitive manner.

In addition, Permanence beautifully displays facsimile reproductions of Ian’s handwritten lyrics, journal entries, and drafts for lyrics, as well as striking reproductions of Joy Division artwork, fan letters, images from fanzines, and the covers of the books that most interested Curtis and influenced his work.

The book covers – which include Rimbaud, Artaud, Nietzsche, and Dostoevsky, among others – provide a necessary addition to Curtis scholarship. They demonstrate the way in which he was interested in the same writers who affected singer-lyricists such as Jim Morrison (Ian famously kept a poster of Morrison in his house) and Patti Smith.

Of course, writers whose book covers Deborah and Savage chose not to reproduce – Gogol, Ballard, Kafka, and Burroughs, for example – influenced songs such as “Dead Souls,” “Atrocity Exhibition,” “Colony,” and “Interzone.” But my guess as to why they included covers of books by the authors mentioned in my previous paragraph is because their inspiration isn’t so obvious.

Take for example, Dostoevsky who, like Ian, suffered from the chronic illness of epilepsy. Seeing the cover of Ian’s copy of Dostoevsky’s The Idiot is very moving because it shows that Ian tried to understand his own chronic illness and human suffering while retaining a Christ-like attitude toward humanity. And, of course, this is just what he did in the lyrics for “She’s Lost Control,” which is about a little girl who died from the disease.

Morrison populates the melodies of Doors’ songs such as “The Crystal Ship,” “The End,” and “Indian Summer” with elongated notes, creating a dreamy and melancholic effect that adds emotion to the band’s complex music. Ian sings in a way similar to Morrison on “Atmosphere,” “Heart and Soul,” and “New Dawn Fades” but makes the melodic approach his own.

Smith’s more punk and guttural approach also impacted Ian. Her “Land” is a 9:25 burst of energy in which she belts out her lyrics in an aggressive punk style, which includes screams, grunts, and, famously, a direct reference to Rimbaud.

On songs like “Disorder” and “Transmission,” Ian follows Smith’s rhythmic style but, again, shows his originality. “Disorder” contains all of Smith’s punk energy – not to mention the nakedness of Rimbaud’s poetry – but does so in a way in which his voice becomes a part of the overall sound of the Joy Division composition. Ian uses his voice as another instrument here, just as his voice, conversely, stands outside the music on “Transmission,” commanding the listener to “Dance!”

Ultimately, So This Is Permanence is essential reading for any Joy Division fan or, for that matter, any lover of literature. Not only does it provide a definitive reproduction of Ian’s lyrics, but it also provides insight into his thinking process and his relationship with his fans. And, perhaps most importantly, it shows that Ian operated in a lineage of writers and singers stretching back to Dostoevsky and Nietzsche and landing firmly in his present – the punk of Smith.