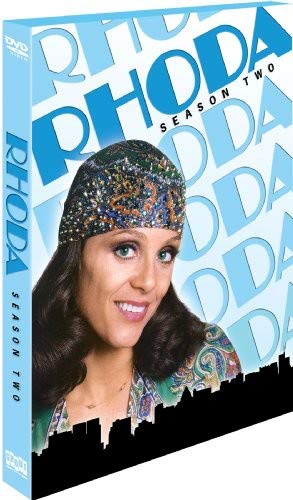 The New York-born Harper, of course, was known for a tremendous body of work, but her turn as Rhoda Morgenstern, the best friend to Mary Richards on the  Mary Tyler Moore Show, remains one of the greatest roles of all time.

After years of theatre, Harper got her break on the show and she started off as the Best Friend, the Ugly Duckling; the one that had all the great lines, and the one who always greeted Mary by saying “Hiya kid!”

Rhoda would put herself down because of her weight, but as the show went on she actually lost weight (Harper would later credit her involvement with Est for her weight loss). She would become known for wearing colorful scarves over her hair, and that signature move really made her stand out. One of my favorite episodes is when Rhoda competes in a beauty contest. Mary helps her get ready, along with Phyllis (Chloris Leachman, who used the opportunity to sing “Ten Cents a Dance.”). When Rhoda came back later, revealing she won, she showed Mary her sash, then said: “After thirty-one years, I won.”

The subtext was that it wasn’t just a beauty contest she won. She was finally winning at life.

It made perfect sense that Harper would be spun off in her own show; Minneapolis was just getting too big for her. Rhoda moved back to New York, then met a guy named Joe. In true TV Land fashion, they fell in love and got married. “Rhoda’s Wedding” was one of the appointment episodes; it was before VCR/DVR so you had to make sure you weren’t working or doing anything to miss you seeing Rhoda walk down the aisle. In true Rhoda fashion, it didn’t go to plan: Phyllis forgot to pick her up from Rhoda sister’s apartment so Rhoda had to run/take the subway to her parents’ house. What impresses me about the episode is how gracefully Harper runs in her wedding dress–but then again, she was a dancer for many years before making it in television.

Rhoda and Joe were too happy. And happy is not good on TV–where’s the conflict? So they broke them up, and had Rhoda starting over again and she still wore the best scarves on television.

Rhoda eventually left the air in 1978 and sadly, she never got a good-bye episode. That’s why I was so excited when it was revealed there was going to be a Mary and Rhoda reunion. Mare! Rho! The girls were coming back to television, Mr. Grant!

The movie was good, not a great–a bit like a high school reunion. You see them and they’ve turned out fine, but you want more. A full reunion wouldn’t be possible (by then, Ted Knight and Nancy Walker had died) but it was better than nothing. And how fitting was it that Rhoda’s daughter was named Meredith (Mare) and Mary’s daughter was Rose (Rhoda.

Bosom buddies, friends to the end.

Harper did TV movie roles after Rhoda’s cancelation, then had another chance at a sitcom in 1985. This time, it was called Valerie. She played a mom to three boys, one of them played by Jason Bateman. The ratings were decent for the first two years and the show was even renewed for a third season in 1987. However, Harper and her husband Tony Cacciotti tried to figure out a way for Harper to get more money. She thought the talks were going well until she received word that she was fired from the show.

The show that had her name.

Stunned, she filed suit against Lorimar, the studio that produced the show. She won the suit several months later (the show was retooled as The Hogan Family and Sandy Duncan joined the cast as a mother figure). Although it was hard, she kept things in perspective: She had and her husband had their health and they had just adopted a beautiful daughter named Cristina.

All she wanted was her good reputation back. And she got it.

Along the way, she was a tireless activist, involved deeply with the Women’s Liberation Movement and feeding the homeless through a charity she co-founded with Dennis Weaver called L.I.F.E.

From Hot In Cleveland to The Simpsons, Harper continued doing TV movies and plays. She embraced being Rhoda; it made her a star, why not? She even titled her memoir I, Rhoda which came out in January 2013. Yes, of course, I read it. I was delighted that there was no catfighting between her and Mary Tyler Moore; the best gossip was that Harper caught Moore’s son Richie and sister Liz smoking. She made them promise they wouldn’t do it again. That’s our Rhoda!

Two weeks after the book’s publication, Harper wasn’t feeling well. A lung cancer survivor, she went to the doctor and they found out she had a brain tumor. Deciding to face it head-on, Harper shared her story with People Magazine.

While receiving treatment for cancer, she kept acting. She even performed on Dancing with the Stars. However, sadness still was there: She mourned Mary Tyler Moore when she died in 2017, and co-star Georgia Engel who died early in 2019.

Earlier this month a GoFundMe page was set up for health expenses, and Harper’s husband announced his resistance towards putting her in hospice.

She lost her battle earlier today and it’s a profound and terrible loss.

But in  that in the end, Harper made a difference in the world because she made us laugh. At ourselves, at each other, at the follies of the world.

And that’s all that matters.