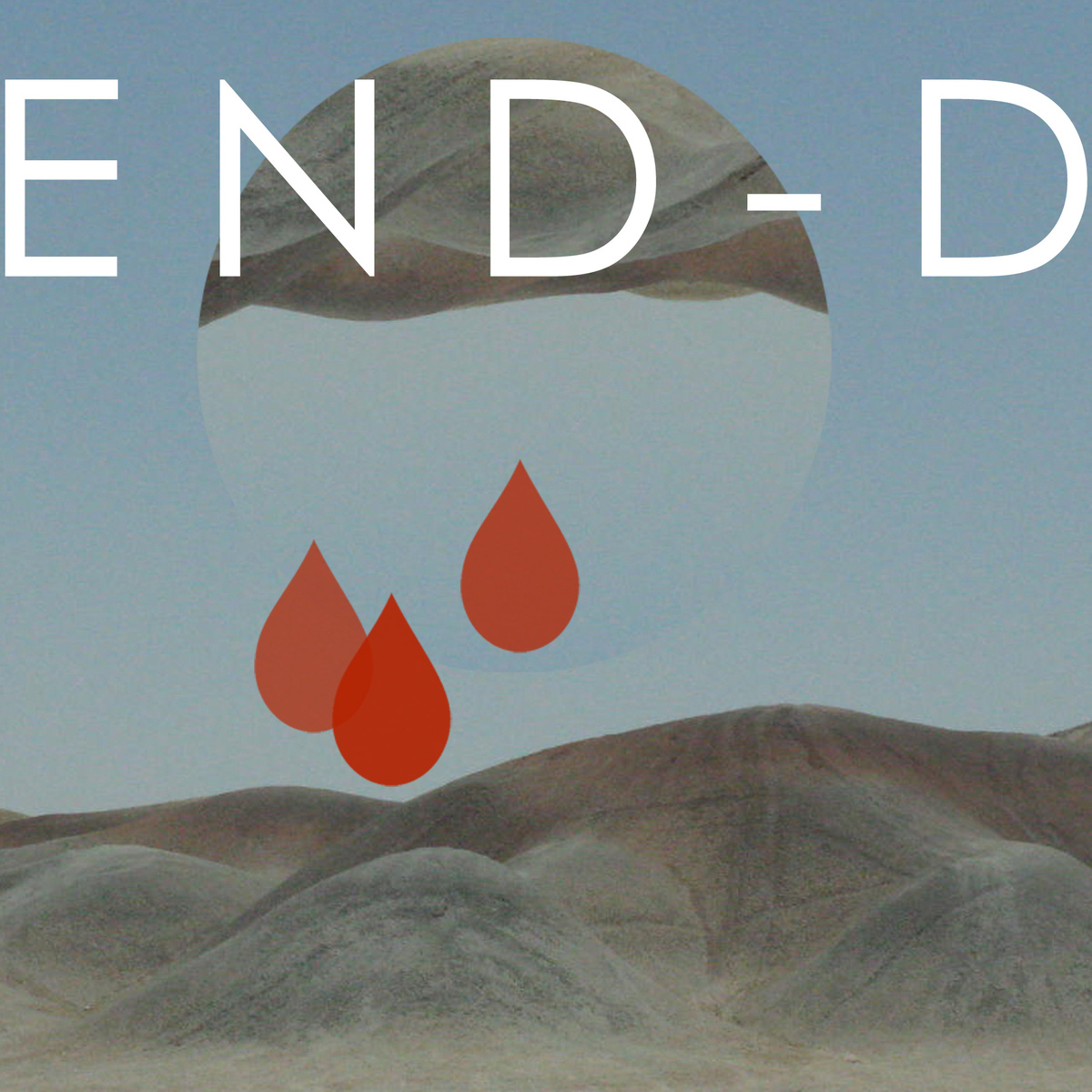 If you listen very carefully to Pillars and Tongues’ under-the-radar new album End-dances, you’re as lucky as you’ll ever be, generously rewarded beyond your subtlest dreams. Shaded and sumptuous and so assured of arrangement and texture as to be – truly – breathtaking, it’s impossible to understand how the hyphenate ‘under-the-radar’ could appear in any sentence related to this record. The care taken with detail here – and before we go any further, massive kudos to the engineering work of Theo Karon – is matched only by the murmuringly lush spectacle of sound. Never, to my knowledge, has the understated hit with such force of impact.

This is the music of three people (Mark Trecka, Beth Remis, Ben Babbitt) on a luminous/umbrous high, as if operating under the influence of a God’s cocktail of Ambien and amphetamine. Careful, prayerful, moving, it’s a bruise-kissed soul that drapes with a meticulous languor, clearly meant to make us swoon via a mix of fin-de-siecle fatalism and an electronic audio finesse nonpareil. And swoon we shall.

As with its closest relative The Blue Nile, the music on End-dances flirts with the baroque. The sound here, indisputably, is mannered, but it’s the sort of mannered designed to stir emotion (often of the heretofore sublimated type), to so completely absorb you in its intricately quilted constructions that any thought of that ‘B’ word falls away in the bliss of the moment.

While generally not my intention to frontload a review with a shower of superlatives and oohing awe (the recent Cloak Ox piece a notable exception), in this instance it’s not really my fault, the record leaves me no choice. Everywhere is the sublime. Sometimes it’s tough to do sound justice with the written word and I’ll do my best to be as consummately elaborate here as my abilities allow, but bear in mind that in the end inadequacy will prevail. True beauty is an evasive minx and this one’s graced with such an abundance of delicately-wrought complexities layered and overlapped and interlaced, it’s a challenge to unpack it. One does so gingerly so as to not damage the whole.

To some of you the accomplishments distilled throughout End-dances will be less a surprise, that radar spoken of above more attuned than mine has been and you’ll therefore be more grounded in this Chicago band whose music is notoriously difficult to write about. You will have known of their seven previous releases, from the Protection EP in 2008 to last year’s mini-LP of three reworked songs and a couple new ones, If Travel Is Asked of Me. Perhaps, if you lead the charmed life, you have in your possession the tour single from 2011, Oaky (doting, in late summer). But even if all that be true my guess is you’re still staring with some amount of disbelief at your stereo as this album unspools itself like some serpentine manna made audible.

As there’s nowhere on End-dances that doesn’t engage in the kind of sonic sleight-of-ear sufficient enough to produce said disbelief, we may as well start at the start. “Knifelike” opens with broad brushstrokes of synth that intimate a sweep of lost violins picked up by the wind and blown across the plains to an urban outskirt, and when the gated drums drop in a steady hypnotic gallop, we’re already enveloped in an all-consuming nuance, a sense that will endure the length of the record. Past Mark Trecka’s haunted croon, somewhere in a nether spectrum between those of Mark Kozelek and Bryan Ferry, there’s a vibrating aura of suggestibility – and its twinned opposite unknowability – inhabiting the fields of sound that background this – and every – track.

Frankly, walking around the city listening to this record is an innately ennobling experience. One sees things differently, sees with more of a gently probing curiosity. Flags and banners, the leaves just turning, the river’s surface, all ripple with a quiet intensity they lack in silence. Everything seems to exhibit more soul, the beauty in the way people move is more obvious. This is the kind of record that, somehow, makes the everyday miraculous.

So I start at the start but soon the corpus entire asserts its gravity and it’s realized that every moment on End-dances is inseparable from its essence. To be sure, the eight tracks here are each measurably distinct in structure, length, mix of instrumentation, but as the captivating, transported tone saturates equally from beginning to end, the album as a whole rather plays as a piece, and therefore the terms and adjectives used to paint a specific moment or track necessarily apply across the swath. In the best way possible End-dances never exactly begins and never exactly ends, but instead loops through consciousness and memory like the intellect searching for what it’s like to have a mood.

A fluttering drone quality permeates, there’s an ever-present shift and shimmer of ambient subtleties that, as they drift and flash across the receptors, suggest the hazy mystery of a dry savannah, the gouache wash of an utterly still ocean – the glint and a white/blue noise just this side of silence – the street on a warm summer’s night at 4 AM, the sodium vapor streetlight flickering like a pulse. Subjective impressions, yes, but this band and the soundscapes they’re creating are nothing if not impressionistic. As these tracks hover over me, the drowsy restless thoughts of an insomniac come to to mind, buzzing and kinetic, an unsettleable calm.

If all this sounds as if this is a record  that should be filed in sensual terms snug up against Harold Budd, you’re partially right but mostly wrong. End-dances doesn’t nudge you toward peaceable shores, but rather blows you out of the water, proving beyond question that the quiet can be as startling as the most abrasive David Yowled onslaught. On “Points Of Light,” with its aching resonance, the searching Mingus-like bass, the tip-toeing steals of percussion – crystalline triangle, claves, tom-tom triplets sneaking out the side door – that bring a flitting groundedness if that makes sense (it does), the flinty-eyed, poignant romanticism in the reflecting harmonies of Trecka and Remis, not to mention the violins that rise mid-track to gently saw your heart in half – one can imagine Michael Gira crouched in the corner taking notes on how to make such raw honesty of emotion sacrosanct.

I don’t want to overstate things here but fortunately I can’t. The surge and restraint, the intuitive melding of flow and exacting detail, the pointillistic grace, all have their way with the listener. A transfixed awe is the default response setting, whether via the almost raga-like drone of “Bell + Rein,” a near ten-minute rumination soaked in longing; the unmoored restlessness of “Travel;” the shrouded horizons billowing out from the edges of the vocal-less “Ends;” or the early-morning lake-surface whirr of “Dogs,” its heartbreaking-but-hopeful bassline, the shadow chorus that comes echoing in over the rise at the end. Each of the eight tracks on this record are enigmas come to life, with elliptically glancing lyrics that as often as not nail the essence cold and instrumentation constructed in such a way as to be beyond reckoning. I have no idea how they do this, there are spirits in the mechanisms here and the mystery resides in how Pillars and Tongues summon them. Intriguingly, it’s often hard to tell how those mechanisms work, where the hand-offs are, to say precisely when, for instance, the violin or treated synth stops being the primary vehicle transporting us across the trancescape and the lovely lurk of the bass begins. We just notice it’s happened, like waking up to a new day every couple of minutes.

Yes one struggles to adequately describe the music of Pillars and Tongues. On End-dances it would have been easiest to use the word ‘cinematic’ and use it often, as the sound on this record certainly is that, but aside from it being a too-lazy shorthand, it’s also not enough, it doesn’t encompass, doesn’t penetrate, suggesting as it does both the flatness of a screen and a passing incidentalness. The pieces here are movies projected unbidden upon your consciousness, like thought, like emotion, like impulse and hunch. They follow sinuous paths and do so with intrepid care, resulting in a listening experience that treads that little-known middle ground between the autonomic and the profoundly purposeful, between the simple act of breathing and that of, say, writing your life as an ongoing epic poem filled with constant flux and movement. Beauty, pain, transience, love, mystery, awe, subtleties and transcendence. That buzz in the haze of existence that shadows us everywhere. It may indeed by difficult to articulate the ‘what’ in what this band does – as promised I’ve tried my best – but a wondrous silence may, after all is said, be the most eloquent response possible.