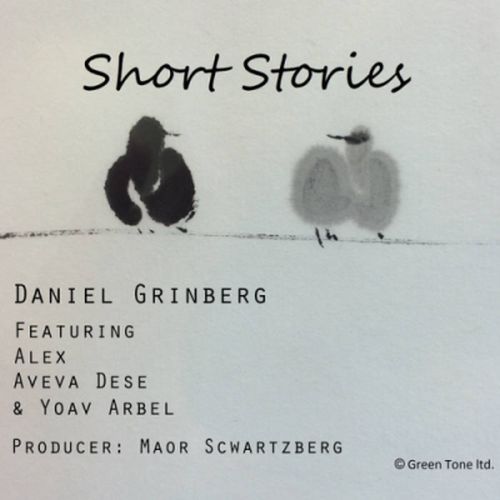 In an engaging and enlightening interview, Argentina-born, Israel-based songwriter and musician Daniel Grinberg discusses his collaborative indie-pop/alt-folk project and album, Short Stories, and his perceptive and profound view of the commonality of humanity in its universal problems and innate optimism.

Stereo Embers Magazine: Hello Daniel! It’s such a pleasure to be able to touch base with you about your recent resonant and perceptive indie pop/rock/folk music project/album Short Stories, which was released in the fall of 2015. From what I understand, creating music is your passion, but it hasn’t always been part of your everyday life. What was the spark that ignited your Short Stories project?

Daniel: Hi Jen. It is my pleasure. Music for me has always been, not just a passion, but my perception of life. I made music all my life – for some small theatre plays, TV shows, some jazz and electronic music, and such things, and through the years I also wrote many songs which I never published. The main reason for that is that I am not a singer and also, I think, because I was not active in the music scene. The trigger to go into this project was meeting young musicians, extremely talented, who were willing to work with me on this project.

SEM: Those young musicians that you mentioned are Alex Moshe, Aveva Dese, and Yoav Arbel. How did you connect with them?

Daniel: I first met Maor Schwartzberg who produced the album. Maor is a great musician, extremely talented, and also a wonderful person. After starting to work together on the styling and arrangements of the songs, he suggested to meet Alex, who loved the material. Aveva and Yoav joined us after that. All these people are very young and know each other from music school and also collaborate from time to time.

SEM: What actually drew me most deeply to your album are the lyrics, which I’m assuming you wrote. Your words are deceptively plain and direct, but they really hit a nerve about the human condition. You emphasize the natural world and our place within it and how we have more in common with each other than what divides us. Was your main aim to create an album that spoke of unity and hope in a currently fragmented world?

Daniel: I don’t really think about the message when writing lyrics and didn’t mean the album to carry a certain message as a concept, but I am happy that you and others see my songs as an optimistic approach on life. And yes, I believe in good. I am not naïve and have a very realistic view on humanity, but I do believe that most people want themselves and others to be happy and are even willing to make an effort for that to happen.

SEM: Besides the lyrics and song composition, what instruments did you play on Short Stories? Who else contributed to the album?

Daniel: I played guitars and keyboards, Maor played guitars, bass, and some other instruments, some of them exotic. Tal Tamari and also Yoav Arbel played drums and percussion.

SEM: Almost of the songs on Short Stories are performed in an upbeat, indie pop/rock or alt-folk style, with a singer and guitars, keyboards, percussion, and drums. “The Forest” seems to be the enigmatic exception with its atmospheric dream-pop vibe and run-on vocals from Yoav Arbel. Why is this track so different from the others?

Daniel: I must give all the credit for that to Maor. I love this arrangement. My idea was to make it much simpler, based on acoustic guitars, and when Maor suggested this approach I was extremely surprised because it sounds so much more interesting rather than what I had in mind. So we went for that. In general I think that the collaboration between Maor and me, two different generations with completely different styles, created a quite unique result and working on that was a great experience. I learned and enjoyed a lot.

SEM: You grew up and reside in Tel Aviv, Israel, but were born in Buenos Aires, Argentina. How much of a culture shock was it to move from Buenos Aires to Tel Aviv when you were a teenager?

Daniel: I was 12 and it’s a shock I guess I will always carry with me. But Israel is an immigrant’s country so everybody carries shocks, in one way or another. When I first came to Israel I didn’t understand the language and that was terrible. But I think I adapted myself quite well and after about one year I spoke the language fluently and made many friends. I believe I carry in me a lot from my childhood in Argentina. I love Buenos Aires and love visiting there. Music, food, football. Nothing like Buenos Aires. I also love talking Spanish and don’t have many opportunities to do so except when traveling.

SEM: On “Rivers” Alex Moshe sings that some of the basic rights of humans is “…the right to exist.” and “…the right to be happy/ To build their own home and live by their faith.” Are your words specifically directed towards the land that you live in? Do you hope to effect positive change, or at least understanding, through what you write?

Daniel: Yes. I live in a tough part of the world. I write things which reflect my feelings and my values. The right to exist, the value of life, the right to be happy, and the right to define who you are and in what you believe. Many people do not accept these rights. Not only here. So much racism, violence, discrimination, poverty, and abuse. It shouldn’t be like this. Simple people want to live and let live. Most governments don’t work and don’t care about simple people. They work for the rich and powerful. So many people suffer in order to make a few rich, and still not happy. I don’t know if my songs influence anybody, and many people think that artists should keep their ideas to themselves. I say what I feel. It pains me to see corrupted hypocritical governments leading simple people to unnecessary violence and suffering. We have a lot of that in this region, from both sides. This also creates fanatic religious idealism. And then you see all this suffering. It is extremely frustrating. It could be so different.

SEM: Of all the songs on Short Stories, which one speaks the most to you? Would you say that your motto can be found on “80 Years” where Alex sings “Eighty years are not that much / …so don’t waste time.”?

Daniel: I think that life is about relationships and self-integrity. Many people spend their life just consuming time, in jobs they don’t like, buying things they don’t need, watching TV shows they don’t care about, and then they go to the annual vacation and they fight with their children because they just don’t know them, and they fight with their friends and neighbors because they don’t have a clue on how to communicate with them, and they spend their vacation shopping and watching TV because this is what they know. I believe that if a person knows himself and take the risk to be himself, and makes the effort needed to build true and honest relationships, his or her life will be much more complete and happy. The thing is that we are educated to be and behave according to concepts based on fears. Fear of not having money, fear of being different, fear of being alone, and so on. The answer is yes, my motto may be found in “80 Years.”

SEM: I just have to ask about this, because I’m curious about the roots of the issue, but you have a strong aversion to school as an institution, but not for its educational purposes. Is this due to bad personal experiences in the school system? In your opinion, is there a better way to educate children, perhaps by tutoring or having smaller classes or being taught in the home environment?

Daniel: I do have a problem with the kind of education children get at school and also with schools as institutions, and those are actually related. Education in schools teach children to be who society expects them to be and not to be themselves. And they educate to compete. They teach children to be winners. Success means earning a lot of money, not being happy, not being gentle. By default a rich businessman is successful and a postman is a failure. And with competition comes violence. And then there are bullies in school who become bullies as grownups, and sometimes the ugliest bullies in school are the teachers themselves who bother and annoy the weak children. And today we have social media through which the strong children make the weak children’s lives impossible. And then you ask yourself, “What went wrong with humanity? Why are people so selfish and so nasty to each other? Why there is so much frustration and jealousy? Why do people need to show off and create a false image of themselves?” It all begins at school.

As a child it was very hard for me to accept this, but I wasn’t weak so I made the teachers’ lives very hard, so I was expelled from almost every school I went to. It had nothing to do with my personal potential. Today it’s obvious. But at that time the school’s people always explained to my parents that I was a problematic and not smart child and that they should consider alternative educational institutions. So yes – the way I see it, school is a bad thing.

SEM: Who did the album cover art for Short Stories? What story is the image of two differently colored birds perched on a branch telling us?

Daniel: I travel a lot. During a trip to China I was at a Beijing flea market. There was a young painter, a woman, painting beautiful pieces of art. Typical Chinese drawings. And there was this picture with the two birds. I thought that this picture relates my songs because of its simplicity. Just two birds on a branch. I told this young artist about my album and asked if it will be OK to use this drawing for the album’s cover. She was very happy about it. So I bought several pictures from her, including the two birds, and based on that we created the cover of the album.

SEM: What is next on the horizon for you? Are you working on new material for an album or EP?

Daniel: I’ve started already producing the next album together with Maor. I intend it to be more rock in style, more free arrangements, and also for it to be a collaboration with some instrumentalists who have worked with me in the past.