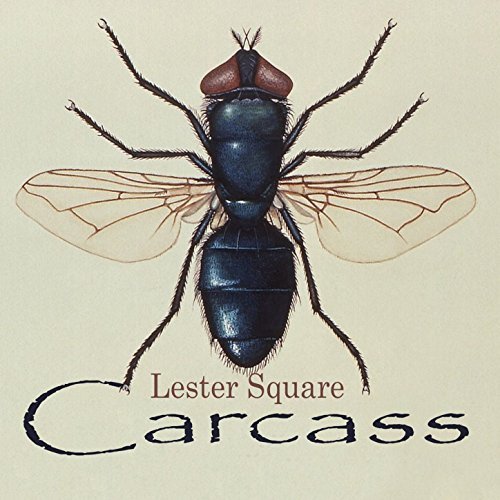 Mister Lester Square (Thomas Woodburne Bruce Hardy if you believe his birth certificate) is best known for – which is to say any mention of him is most often prefaced by – having been the original guitarist in Adam and the Ants and the core founder, along with Bid, of The Monochrome Set. The former of these fame claims represents a preposterously brief time and bears so little consequence on the decades of work that have followed that one wonders why it’s mentioned at all beyond the desultory reflex to score music geek trivia points, and certainly it lends very little context whatsoever to the lovely solo album at hand. The latter, however, speaks with a multi-tiered eloquence to the curiously-focused sinuousness of the path that leads, as if by divining rod, to this singular, quite lovely Carcass.

Pastoral and elegant as birdflight in places, winkingly knowing in others, even stately at times – in a casual sort of way, mind – this primarily instrumental record (occasional collaborator – and former Chef –  Helen McCookerybook provides vox with a nimble lilt on the British folk-leaning “Time Flies”), Carcass, in all its mild flurries and flights of impressively modest fancy, presents a gently kaleidoscopic vision of the Lester Square sound world.

Straying into variance with a short-leashed preponderance of care, this Square portfolio traipses from the title track – a bit of “Telstar” overlaid by some Morricone’d Dick Dale-isms themselves overlaid by the clear precise squall of a few fuzz psych guitar runs – through that genteel morning dew romp of “Time Flies,” past the ghostly lovely MOR strains of “Golden Elevator” (never mind its abruptly nightmarish eaten-by-a-computer ending), the equally intruded-upon “Strangelove,” its dapple of an anchoring Hammond B-3 crowded from all sides by such things as a subtly churning jam of disembodied voices, a multifarious bevy of synth effects, vibey percussion and more controlled-abandon guitar soloing, “Newington Green”‘s easy rolling groove that could’ve backdropped a Christine McVie outtake from the Bare Trees sessions, and into the music hall-inflected “La Monstreuese” where the double-tracked guitar has a searing politesse that, weirdly, reminded this writer of that Steve Hunter solo LP from 1977 or so (Swept Away – ed.) had it had the level of effortless continental élan it was apparently aiming for, the whole record (four more tracks round it out) is a deft bricolage of genre inputs that’s at least slightly off-parallel to The Mono Set’s ever-solid outré-pop leanings but never absent the parent band’s decidedly English playfulness.

Mostly, though, in a single stroke, Carcass, quite pleasingly, represents the triumph of the astute guitar anti-hero who goes by the name Lester Square. [recover your own Carcass here]