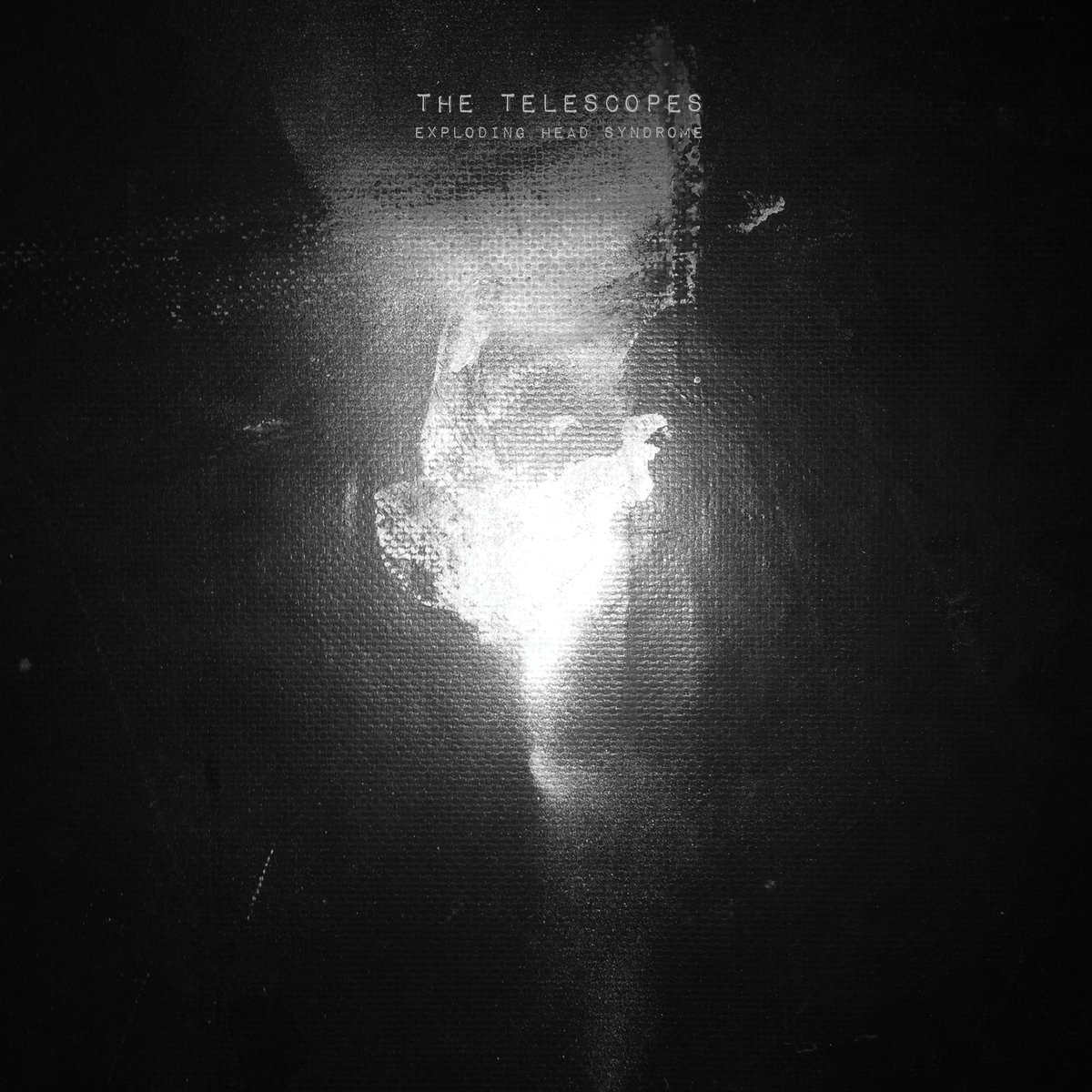 More than just about any other band, writing about the Telescopes is eerily similar to listening to the Telescopes. Each is a process wherein one’s consciousness is stretched in its efforts to encompass, define, in some way assimilate what’s being experienced. In either scenario the prospect of some sort of ‘understanding’ is fluid, if in a damnably stimulating way. Whether via pen or headphones, one finds oneself wandering into fields of oscillation, hypnotic, always at least vaguely electrifying, the air shot through with infiltrative messages not meant to be comprehended so much as absorbed through the skin (there are lyrics on Exploding Head Syndrome but for the most part, as they are on most Telescopes outings, they’re incidental, leeching outward from their buried place in the mix as if caught in some sublimely lost radiographic drift). Answers-slash-resolution to any of the operative mysteries here aren’t evasive, exactly, it’s just they hover on the perimeter in vibrating stasis, insinuating emotionally as if you’ve just been enveloped in a cloud of queerly modern primeval urges. All of which is to say that pursuing either activity – scribbling in response or simply listening – in the presence of  a Telescopes album is to wade your way into full immersion, a sensory deprivation tank for the mind and soul where every twitch of stimulus is amplified against the great uncaring silence of the outside world.

Mind you, melody, rhythm, and other core structural tenets of the prototypical ‘rock song’ are, if not always remarkably evident, nonetheless present, glowing with spectral persistence like wandering, surprisingly hardy survivors of the original explosions from the bygone psych wars. In fact, it’s held – and largely substantiated by repeated listenings – that on Exploding Head Syndrome such elements are actually pushed more markedly to the fore this time around.

Their eleventh album since emerging amid the shoegaze fog of 1989 with debut album Taste that was appreciably the most metal-dense take on that form available – it plays in retrospect like an MBV stepping stone from Isn’t Anything to Loveless – EHS finds mastermind Stephen Lawrie, the solo constant that’s helmed this ship’s fearless expeditions from the start, indeed proceeding with barbed caution toward the tangled proscenium of pop. Whether or not he crosses beneath its threshold is an open question that’s also, almost certainly, beside the point. Because, as it happens, despite the sonic reputation that prowls around behind him, despite the world expecting – to the extent it was at all – another satisfying go-round of sly avant-drollery, what most distinguishes this record is…beauty. While up to this point a province at least implicitly visited by the enigmatic Lawrie, here on Exploding Head Syndrome, inside the usual buzz and disturbance of electronic manipulation and gently riffling curtains of noise, that too-often lazily attributed b-word, though indeed subjected over these eight tracks to stress tests of varying intensity, seeps through and rises to the surface in quiet triumph everywhere one listens.

On opener “All the Way Around (Tout est dans le moment)” it manifests in that ringing insistence of guitar tracing a progression worthy of Psychocandy-era JAMC. On “You Were Never Here” a soporific majesty pertains that speaks for itself, album centerpiece “Until the End” possesses a draping melody of a lonely, poignant organ line that carries the tune like an undimmed torch while final track “Why Are We Doing This to Each Other?” uses a diffuse array of layered guitar textures to produce a downtempo eloquence it’s hard to shake once the stereo’s gone quiet.

Beauty, in some respects, is synonymous with survival – there’s a reason the word ‘enduring’ often precedes it – and it could well be argued that such an understanding is what has helped propel – and sustain – Stephen Lawrie down his Telescoping path despite the somewhat confounding nature of his journey. And though, true, it may also reside in the ear of the beholder, sometimes, however subtly (or even, as here on EHS, damn near subdermally), beauty’s stubborn presence is invincible.