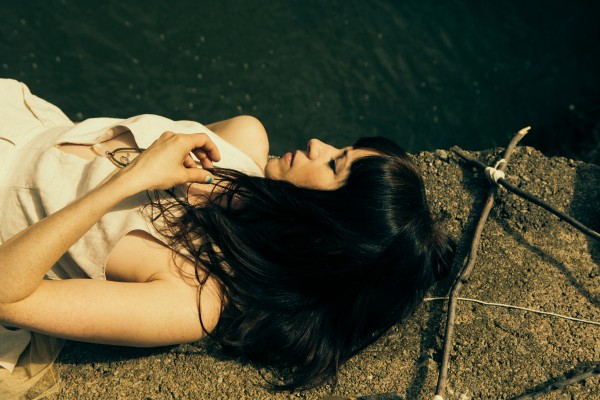 At the beginning of A Farewell to Arms, Hemingway writes, “In the bed of the river there were pebbles and boulders, dry and white in the sun, and the water was clear and swiftly moving and blue in the channels.”

Orenda Fink’s performance at Schuba’s Tavern in Chicago last night (October 19, 2014) made Hemingway’s words come alive, so that they became an analogy for her set, which mainly came from her album-of-the-year contender, Blue Dream.

As Fink played her Fender and sang – with the sole accompaniment of two other musicians: a keyboardist and backing vocalist, and a saw player and guitarist – her gorgeous music washed over the audience like a river, while her words were the “pebbles and boulders” of which Hemingway writes.

But Fink’s words were pebbles and boulders that she’d honed, crafted, and chiseled into glowing statues that transported the audience to a meditative space, where they could contemplate mysteries that have engaged people since they first started traveling the earth in search of meaning: birth and death, suffering, enlightenment, epiphanies, feelings of spiritual oneness with others… 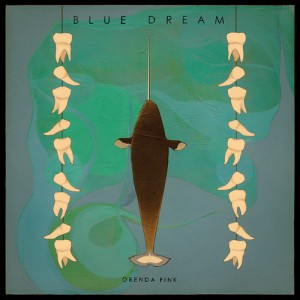 Standing at the center of the stage and wearing a floppy hat that hid her eyes, Fink stood still throughout the show, not only to put the emphasis on her words but also to indicate that she herself was just a vehicle for the poetry that passed through her with a captivating clarity. She was Shelley’s fading coal – a messenger who’d surrendered her ego to something above and beyond herself.

A true artist, Fink – like Kafka, Dostoevsky, Keats, Woolf, and D.H. Lawrence, just to name a few – understands that epiphanic moments, however short-lived, come through suffering. But it’s Fink’s courage and willingness to transform suffering into songs, which may sound dour on the surface, but actually are pebbles and boulders of hope.

Fink’s hope – as the songs that populated her set list in Chicago attest – comes from the suffering that she endured when her dog, Wilson, died. Now, as Fink joked from the stage, this derivation may sound absurd. But, as Kierkegaard argues, faith in the absurd paradoxically gives life meaning. The so-called irrational always trumps the rational. The death of a beloved dog can serve as a conduit and catalyst to a mindfulness of the universal processes of existence that, in Fink’s case, becomes the source of great art.

And Fink’s art – in all its mystery and grandeur – was on full display in Chicago. Again, most of the set consisted of the Blue Dream material, the centerpiece of which is “You Are a Mystery.” Fink sang the mournful melody in a way that enunciated lyrics that celebrated the mystery of not only Wilson’s eternal existence but also the sense of awe that life provides every day. And the seemingly melodic and lyrical contradiction of sadness and hope coexisting in the same song highlights the way in which this contradiction is the very stuff of human reality.

Set opener “Holy Holy” – which follows “You Are a Mystery” on Blue Dream – set the tone for the evening. Brian Wilson’s “Our Prayer,” the opening cut on The Beach Boys’ SMiLE, serves the same purpose as Fink’s opener. Both tunes courageously invite listeners to open up a gateway for introspection. Both tunes are also stunningly beautiful, and Fink’s rendition of “Holy Holy” in Chicago accomplished its purpose of providing access to an evening of self-reflection, transfixing the audience at the outset. (Was Fink’s dog, Wilson, named after Brian?).

Fink performed other key tracks on Blue Dream, including “Ace of Cups,” “All Hearts Will Beat Again,” “Sweet Disorder,” “This Is a Part of Something Greater,” and “You Can Be Loved.” Each and every tune was an epiphany on life and death, redemption and the possibility of eternal life, and the oneness that exists in the apparent chaos of life. They were manifestations of the sense of archetypal unity that dreams provide and of which Fink’s songs consist.

In fact, the songs that Fink played from her earlier solo records – Invisible Ones and Ask the Night – indicated that Blue Dream is a culmination of sorts for a poet-singer in search of meaning.

It’s no accident that “Why Is the Night Sad?” fit in so well with the Blue Dream set. It took the death of Wilson and the suffering that it caused for Fink to be able to answer that question with such elegance on Blue Dream.

It’s also no accident that Fink chose to end her set with “Easter Island” – a song that invites sufferers of abuse to come home from an island populated with moai (the famous statues of incomplete people). Blue Dream seeks to be a summons for people to become complete, at home in life’s mysteries.

Orenda Fink lit up the Chicago night with her dream soul – music in which souls touch soul with tenderness and love. What more can an artist offer?