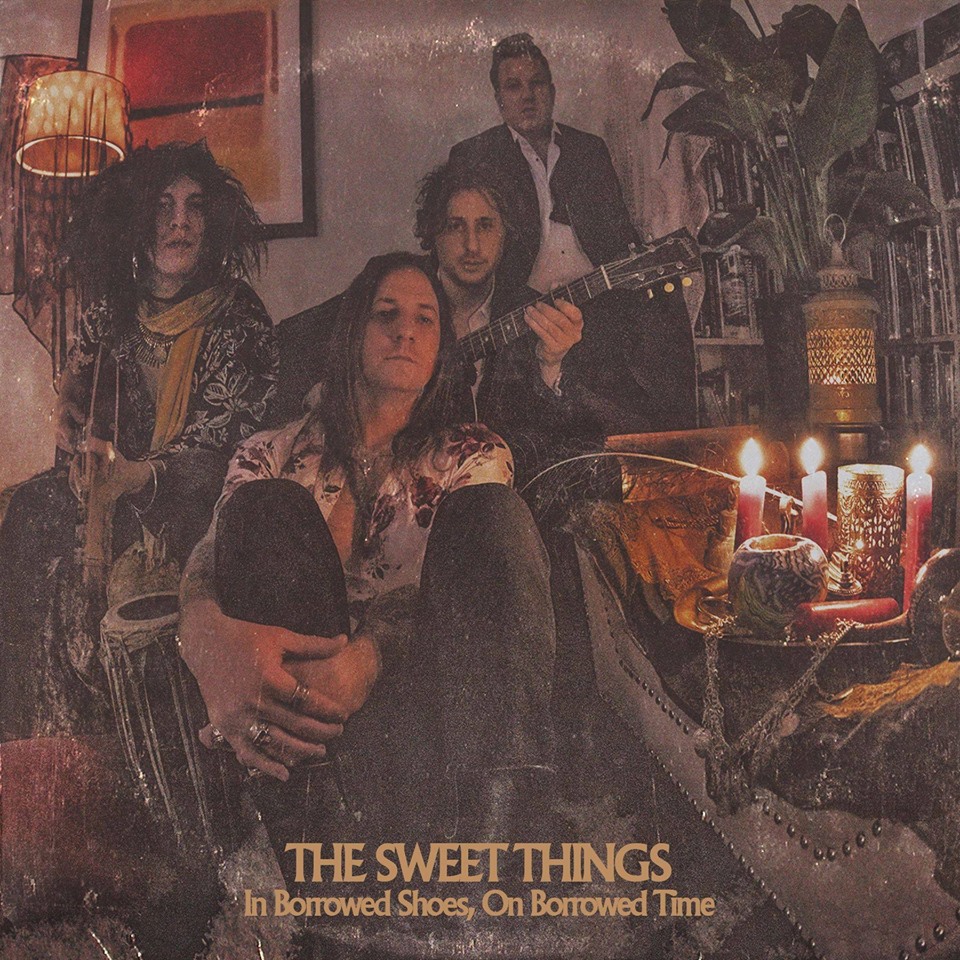 The Sweet Things are one of our favorite bands here at Stereo Embers.

The New York outfit’s searing Matt Chiaravalle-produced debut In Borrowed Shoes, On Borrowed Time is not only one of our favorite albums of 2019, its scruffy blend of feral stomp and boozy swagger make it an instant rock roll classic. A rabid hybrid of glam, punk and ragged rootsy glory, the record brings to mind everyone from Killdozer to the Lords of the New Church to Johnny Thunders. It’s dark, it’s inspired and it’s utterly infectious.

The Sweet Things have a busy schedule ahead–they’re playing with the Supersuckers July 24th at New York City’s Bowery Electric, they’re doing a three date run with Italo and the Passions August 2-4 and they’ve got a Southern tour scheduled for November. But, busy as they are, frontman Dave Tierney found time to give us a NYC playlist that we think you’ll find to be endlessly amusing.

They play this song whenever the Mets win.  Ace didn’t write it, but said he covered it because of his experience with prostitutes in Times Sq.  There’s a Starbucks and a juice store and a bunch of other stupid shit at this intersection now.

St. Marks is still cool I guess.  There are no music venues anymore and I think the last of the cool bars on the street finally closed down, but if you’re into giant open air asian food courts, well then this is the place for you.  It’s fun to haggle with the guys selling cheap sunglasses all down the street and see if you can get the price down from 10 to 7 bux.

You probably know all about the Chelsea.  Lots of great artists, writers, and musicians stayed here and contributed greatly to society.  It’s been closed for years now, but when it reopens I think it’s gonna be set up as place for rich people to stay.  That’s good, I think we were running low on those.

Richard Hell & The Voidoids – Down at the Rock and Roll Club

I think Richard Hell and Tom Verlaine built the stage at CBGB.  It’s closed now, which sucks, but there’s a John Varvatos store there now, so really who’s to say which is better?  You couldn’t buy an ugly 350 dollar shirt at CB’s.

Mick says he can’t give it away on 7th Avenue, but I dunno.  It’s like 3 miles long, maybe he should just try another corner.  There is actually a bunch of cool shit here.  The Village Vanguard, uhhhh…..I thought the Hard Rock Cafe was cool when I was like 8 years old.  I wonder how many Starbucks they managed to squeeze into those 3 miles.

This is a song I wrote for my old band The Sharp Lads about the St. Mark’s Hotel.  GG Allin was supposed to stay here June 28, 1993, but instead he did a bunch of heroin and died on the floor of someone’s apartment.  This spot is still open luckily, you can rent rooms by the hour.

Does this even count as a place?  It’s great and it’s still totally disgusting.  This giant metal snake will take you anywhere in the city you wanna go (unless someone jumps in front of one, which is the preferred method of suicide in New York).  Is it even worth going to if you can’t get to it on the train?  I wouldn’t know.

Speaking of the train, do you got an hour or more to kill and wanna take a long ride?  There aren’t too many beaches you can get to on the train and I think you can walk on this one barefoot now without having to worry about stepping on discarded needles. Don’t quote me on that though, I don’t wanna be responsible for tourists throwing caution (and their crocs) to the wind and stepping in the wrong spot and instantly being transformed into William S. Burroughs.

The Dictators – Down on Avenue A

This is still the coolest stretch in the city.  We recorded our new album at Flux Studios on the corner of 2nd and A.  There was a sweet dollar a slice pizza spot on the first floor.  I ate a lot of that to fuel the recording.  We moved into the studio right after David Crosby finished his last album.  I can only imagine how many slices it takes for him to make a whole album.  They probably had to buy a bigger oven.

This thing is a big green ugly eyesore, but it was a gift from the French so I guess it can stay.  I’ve never been.  I don’t think most New Yorkers have, but if you visit the city you should totally go and walk up, or take the elevator, or however you get up, I don’t even know.  You could probably walk around barefoot without stepping on any needles here too, but yeah, don’t quote me on that either.

For more information on THE SWEET THINGS, please visit