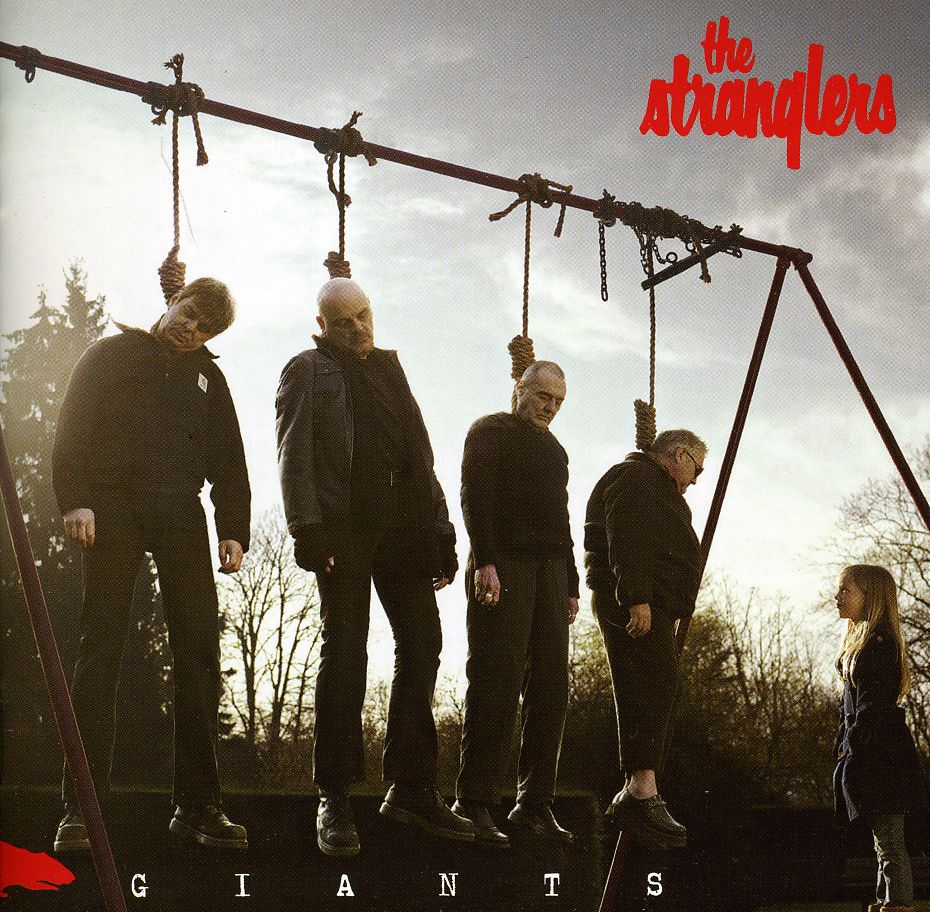 As soon as you hear “Another Camden Afternoon” – the instrumental with which Giants begins – you feel the grip of The Stranglers. JJ Burnel’s powerful bass drives the song, propelling it forward with a melodicism that only enhances Baz Warne’s bluesy guitar licks, Jet Black’s rock-solid drum riff, and Dave Greenfield’s keyboard wizardry.

All of the elements that make The Stranglers one of the best and most important bands to emerge from England’s lauded punk and post-punk scene of the late 1970s are there, especially the band’s willingness to take risks. How many bands of their generation featured keyboards so prominently? (I know that Wire and Joy Division did as well, but The Stranglers got there first – just listen to their classic debut LP, 1977’s Rattus Norvegicus for proof). How many bands of their generation wore their debt to Ray Manzarek and The Doors on their sleeves so prominently? How many played the blues?

Well, an endless appetite for musical discovery, innovation, invention, and good old-fashioned musicianship have always characterized The Stranglers – and separated them from many of their contemporaries, who were satisfied to create a punk authoritarianism that insisted upon short, fast, loud, Chuck Berry-esque riffs, major keys, and the banishment of keyboards, extended guitar solos, and sometimes even melody.

Never satisfied with the boundaries of punk, The Stranglers incorporated and helped invent many of the genres that form today’s musical lexicon, from New Wave to art rock, from gothic rock to, yes, blues-inflected punks (see The White Stripes, etc.). And the band’s early records – all of them classics – stand as testament to their boundless creativity: Rattus Norvegicus, 1977’s No More Heroes, 1979’s The Raven, and 1984’s Aural Sculpture.

The Stranglers have continued to make terrific music since Aural Sculpture, but there’s something special about Giants, the bands 17th studio album, which comes out in America this week. Not only has it inspired the band to tour America for the first time in roughly 20 years, but it serves as a compendium of everything that makes The Stranglers such a knockout of a band and, as such, a necessary listen for anyone interested in getting to know – and to feel – what they’ve done for music.

Giants abounds with remarkable tracks, so much so that it’s difficult to choose which ones to discuss. But here goes.

After the opening instrumental “Another Camden Afternoon” fades, “Freedom Is Insane” occupies the soundscape. It begins with a beautiful, dark, atmospheric, and moody Greenfield keyboard introduction (cool introductions are one of The Stranglers’ calling cards), before it leaps into a catchy rocker, which features some amazing Warne guitar riffing and a chugging bass line by Burnel. But perhaps Burnel’s lyrics – written from a soldier’s perspective – are the best thing about this track, referencing Robinson Crusoe as a way of criticizing the insanity behind England and the United States’ attempt to spread their understanding of “freedom” in the Middle East.

“Giants” is the perfect follow-up track because it finds Burnel contemplating another war – World War II. Accompanied by some snazzy Greenfield synth work and additional bluesy guitar courtesy of Ware, Burnel criticizes his own generation for perhaps being incapable of fending off the Nazi menace. He sings, “I’m glad my father’s not here to see / What happened to men like him / They fought the battles these dwarves can only talk about,” in a disdainful way that contains all of punk’s glorious anger.

The first single off Giants, “Mercury Rising” features Ware’s shimmery guitar riff and some cool New Wave keyboards. The almost spoken vocals perfectly fit the music, but the organ-backed guitar solos take the song to a new tempo and an unexpected place. This number is Ware’s finest moment on the record.

It’s great to see that The Stranglers haven’t lost their sense of humor. From “Peaches” on, the band has reveled in a Monty Python-esque irony that confuses many but, for the initiated, is always hilarious. “Adios (Tango)” is no exception. This Giants track really is a tango, sung by Bernel in Spanish (!), about the end of a love affair. What makes it so funny and enjoyable is the way in which Ware punctuates the track with searing distorted guitar lines and Greenfield adds surprising synth sounds.

Even though Giants includes a song about getting older – “Time Was Once on My Side” – The Stranglers, thankfully, haven’t gone anywhere. In fact, this song – with its catchy chorus, vigorous verses, creative arrangement, and Greenfield’s as-always unpredictable but perfect keyboards – shows a band at the height of its powers.